Beneath its surface, the Red Planet may be slightly mushy. 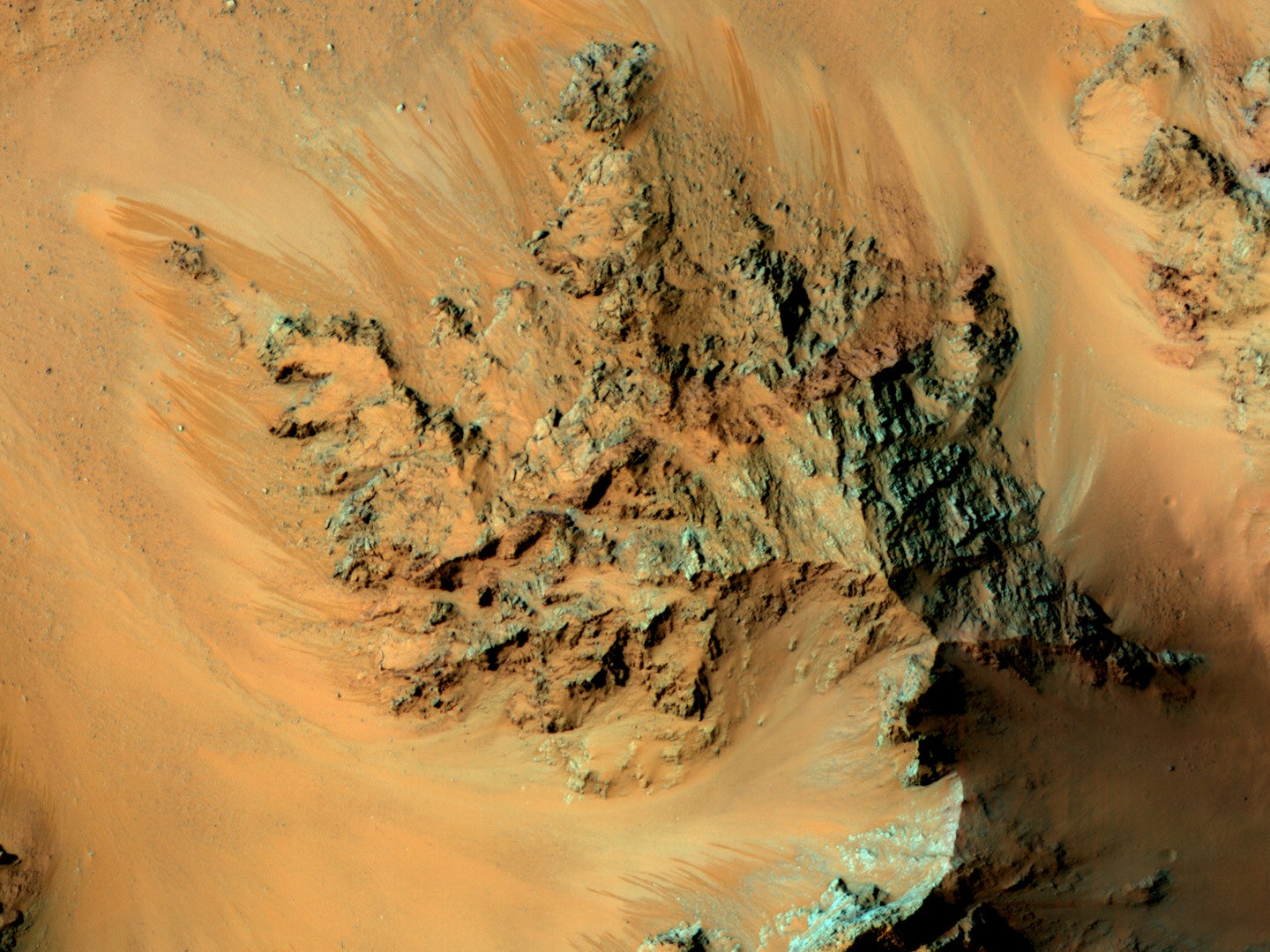 The Red Planet’s dark streaks could be evidence of water, landslides, or now… both?. NASA/JPL/UArizona
SHARE

Mars appears to be weeping with the seasons. As the days grow warmer in the Martian summer, hundreds of thousands of dark streaks stain the planet’s cliffs and craters, only to fade away until the following year. After more than a decade of controversy, a laboratory experiment may finally have revealed why.

When the eagle-eyed camera on NASA’s Mars Reconnaissance Orbiter first spotted the bands in the late 2000s, shocked researchers wondered if they might be watching water streaming across the Red Planet’s barren surface. What else would be melting in summer and evaporating in winter? It was a tantalizing discovery, since a wet Mars could mean a living Mars.

But if these streaks, known as Recurring Slope Lineae (or RSL) really are wet spots, the liquid responsible acts nothing like terrestrial water. Some streaks spread even on frigid days that should freeze water solid, for instance, and many lines flow only on steeper slopes (water should find its way down even the gentlest hills). Some scientists have argued that the dark veins aren’t made of water at all and are really just arid landslides, but neither camp has produced a satisfactory explanation.

“The ice and liquid models aren’t working because we don’t see a lot of ice where the RSL are,” says Janice Bishop, a planetary scientist at the SETI Institute, “and the dry models don’t work because you need something to get them started.”

Perhaps, she now suspects, RSL act dry in some ways and wet in others because they are, in fact, both.

To get into a Martian mindset, Bishop and her colleagues took inspiration from what goes on beneath some of the driest locales on Earth, in field sites like Antarctica and the salt flats of the Atacama Desert. There, they noted how stray molecules of water could conspire with salty ingredients in the dirt to create literally earth-shattering effects.

Salt loves water, slurping it out of the air every chance it gets (that’s why restaurants put rice in saltshakers, so the rice grains will sponge up the water before the salt gets soggy). Salt underground is no different. And when salty minerals soak up too much water, they liquify, leaving empty spaces behind them. On Earth, Bishop and her collaborators noted how saturated chlorine salt can dissolve, transferring its water to gypsum (a type of salt containing sulfate) to dissolve that too, hollowing out parts of the earth to create cave-ins and sinkholes.

“The places that seem to have sulfates and chlorine salts together tend to have weird things happen,” she says. “It seems like having both of these salts together, they’re kind of passing the water around.”

Rovers have detected plenty of salt on Mars, Bishop reasoned. Could underground water melt away minerals and destabilize the Martian surface enough to cause RSL? They moved to the lab to find out.

First, the researchers checked whether the frigid Martian soil could even get wet. They took Hawaiian volcanic dirt with a similar makeup, added salt and a drop of water, and chilled it to about -130 degrees F (-90 degrees C). They then warmed the sample, and used a machine called a spectrometer to assess the state of the H2O molecules. The team found that the scattered ice grains softened at around -60 degrees F (-50 degrees C), a temperature well within the reach of a sunny summer day on Mars. Previous groups had studied how blocks of salty Martian ice might melt, Bishop says, but this experiment was the first to show that dry volcanic soil with tiny flecks of ice would also get a little slushy despite the bitter climate.

Knowing that the water could get around, the team investigated what would happen if it did. In a separate experiment, they mixed the volcanic soil with the appropriate salts and squirted some water into the bottom of the breaker. Sure enough, the water spread upward, devouring salts as it went. They were left with a dry, bumpy, brittle crust covering a weakened layer of moist soil.

It’s this killer combination of slightly soggy soil with a desiccated and fragile crust, Bishop suspects, that has been setting up Martian slopes to collapse as RSL (and driving the wet vs dry debate here on Earth). First, the movement of water could create frail,exposed crust. Then dust storms might come along and knock the crust down, triggering dry landslides. The researchers described their work today in Science Advances.

The theory also matches other puzzling observations, according to Lujendra Ojha, a planetary scientist who helped discover RSL as an undergraduate and is now an assistant professor at Rutgers University. A few years ago, he and some colleagues noticed mysterious “slumps,”  small landslides near some RSL. “We had absolutely no idea what the heck they were,” he says.

Now he wonders if the same water-dissolve-salt process could link the two features. “What I really liked about the paper is it says, ‘over time you should see these landslides,’ and we do see them,” he says.

Bishop’s experiments show that the process is physically plausible, but does it actually collapse crater walls on Mars? The next step would be for future probes with more sensitive sensors to see if salty areas are extra prone to RSL. “That seems to be the missing link,” Ojha says.

RSL driven by traces of underground moisture would make for a livelier Mars, but probably not a living Mars. The water molecules would be too few and far between for astronauts to use, and the extremely salty soil would poison life as we know it.

Nevertheless, sparse underground water molecules could be good news for microfossil hunters. Mars was likely a wet, lush place about four billion years ago, “then there’s this big question mark” about what happened next, Bishop says. “If today we’re seeing evidence of tiny bits of ice or liquid water embedded in the soil, then that means that this period [of habitability] could have been extended.”