The science behind our circadian rhythms, and why time changes mess them up

Understanding one of your body’s more important clocks can help you adjust to time changes. 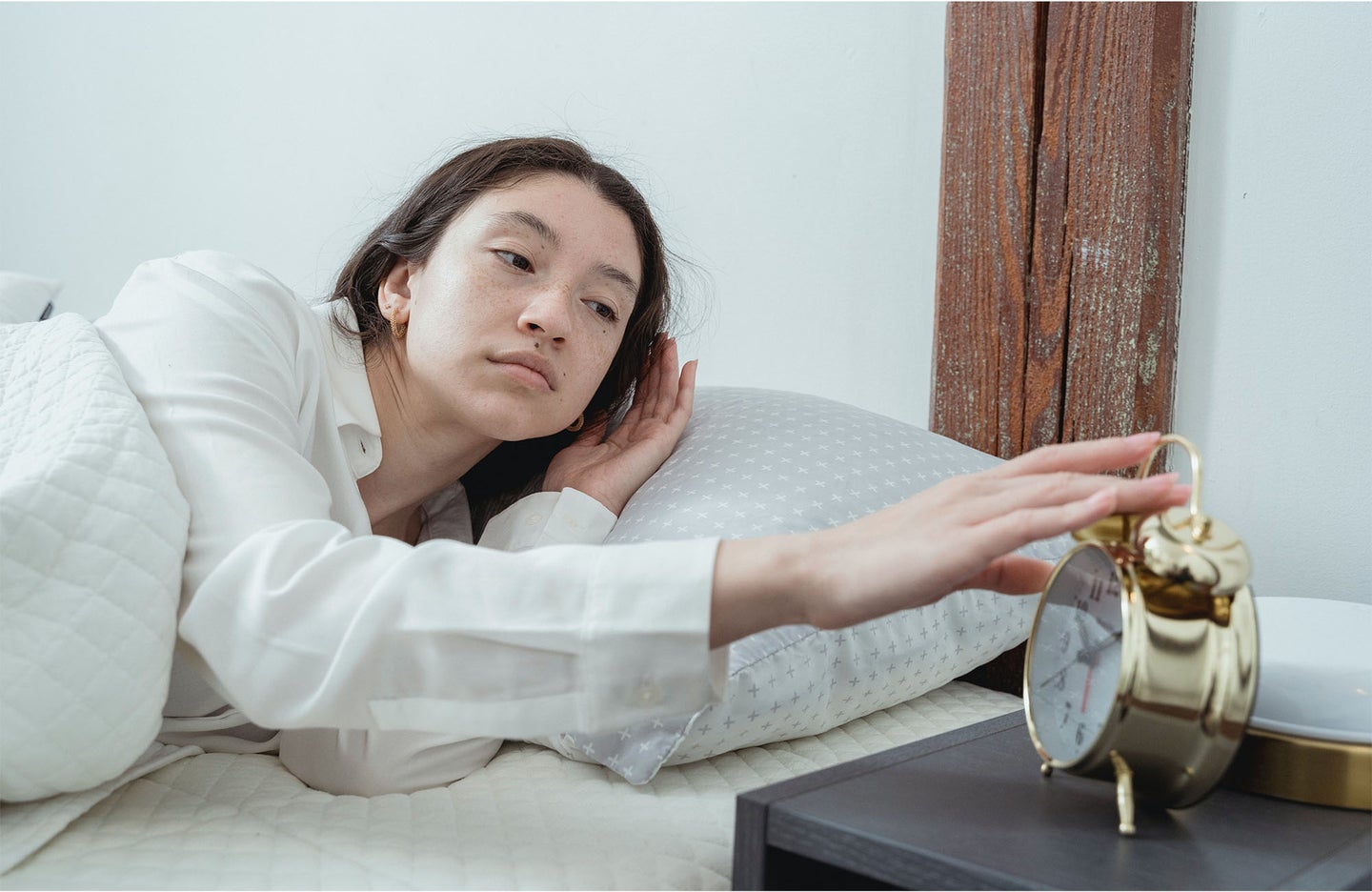 When the time changes, your circadian system may be out of sync with the sun. Miriam Alonso/Pexels
SHARE

Two times a year, most Americans face a one-hour time change. Small as it might be, it can still create major hiccups in our daily lives. In March, we wake up exhausted and stumble out the door what feels like an hour earlier—only to be confused when, at the end of the day, it’s time to go to sleep, but we’re wide awake. And in November, we spring out of bed grateful for the extra hour of zzzs standard time has given us, and then remember what it’s like to commute home in the dark.

Although more than 60 percent of Americans want to see this time-switching system done away with, we aren’t there yet. Earlier this year, the Senate unanimously voted to make daylight saving time permanent, but the Sunshine Protection Act has yet to be voted on in the House. Meanwhile, the biannual time changes cause residents of 48 states to face circadian misalignment. That, essentially, means our internal clocks are out of whack.

Circadian misalignment isn’t rare. Being too much of a night owl may be enough to become misaligned. Daylight saving can kickstart this—but so can the choices we make every day. To combat the effects of daylight saving and other biological clock disorientations, the key is to understand our circadian system.

What are circadian rhythms?

Our circadian system is like an internal clock that regulates sleeping, waking, and other cyclic behaviors, says Jeanne Duffy, associate professor of medicine at Harvard Medical School. “The circadian system helps us be optimally ready for regular changes in our behavior that happen every day,” says Duffy. These rhythms essentially follow a 24-hour cycle: The term itself comes from the Latin phrase circa diem, which means “about a day.”  For some people, especially women, the clock may be slightly off by a few minutes.

We have other clocks, too, that influence our bodily processes. Some lead to seasonal rhythms, others are annual, and a few are even lunar, Duffy says. Most living beings, all the way down to unicellular organisms, use circadian rhythms as regulators.

How do they work?

For circadian rhythms in humans, a specific region of the brain—the suprachiasmatic nucleus (SCN) in the hypothalamus—is where the magic happens. Scientists hypothesize, based on studies of mice and flies, that an accumulation of proteins is responsible for governing this mechanism. Those molecules, some of which are called CLOCK proteins, gather throughout the day and activate genes that keep us awake.

CLOCK proteins may also create their own off switches. Based on the mouse and fly research, CLOCK proteins cause other inhibiting proteins to slowly build throughout the day. Finally, around dusk, these other proteins overpower the genes that activate CLOCK and make us sleep. The cycle continues: During the night, CLOCK, now low, starts to increase—signaling us to wake up and start the process all over again.

Circadian rhythms are based on this feedback loop inside our brains, but our environment informs our clocks, too. “True circadian rhythm is internally generated,” says Duffy, but external factors “synchronize our internal rhythms to the external world.”

These external cues are called zeitgebers, which is two German terms smashed together to mean “time giver.” Light, for example, is a big one. Because our eyes are connected to the SCN, light exposure can reset when these genes are activated or deactivated. Darkness can also impact melatonin production, aiding rhythmic sleep patterns by promoting the release of these hormones that make us drowsy. This can mean the circadian rhythms of visually impaired individuals may not be very synchronized to our day and night schedules, although melatonin and other supplements can help. Light is not the only factor to influence these rhythms–so can exercise, age, and temperature.

[Related: How to wake up when it’s still dark outside]

Our daily rhythms likely evolved because of the consistent light-dark pattern in the natural world, says Duffy. “If the first single-celled organisms were living in that strong environment of light and darkness, it would help them if they could anticipate it,” she says.

What do they regulate besides sleep?

Quite a lot, actually. Circadian rhythms influence our immune systems, hormones, body temperatures, and metabolisms, and those are just some of the processes that have been studied. There might be many more systems that circadian rhythms govern that we haven’t even explored, says Duffy.

Metabolism is one that is relatively well-known. If you’ve ever heard that you shouldn’t eat dinner too late, the circadian system might be why. ”If we eat during the daytime, our metabolic system can respond to that food quickly. Whereas if we try to eat in the middle of the night, none of our systems are ready for that,” says Duffy.

Scientists are investigating how circadian rhythms affect other processes. Recently, researchers have been studying vaccine-fueled immune responses based on time of day and circadian rhythms, says Duffy.

How do we mess this up?

Drowsiness isn’t the only consequence of an upset rhythm. Individuals who go against their internal clock “are most likely to develop things like metabolic disorders, obesity, diabetes, and cardiovascular disorders,” says Duffy.

And it’s surprisingly easy to get out of whack. Even just one night of staying up late can create cascading effects. “You might sleep a lot longer in the morning, but not necessarily because your clock is reset, but because you’re sleep deprived,” Duffy says. “By sleeping in, you miss the morning sun exposure that synchronizes your clock to the external world. And then that night, you don’t get sleepy as early.” And then a few days later, “it’s impossible to get up because you have shifted your clock,” she says.

Other common activities, like going on our phone before bed, can confuse the synchronicity, too, by mimicking natural light that we equate with daytime. Sleep is “very highly influenced by our behaviors and things that we do, especially our exposure to light,” Duffy says. “And so a misconception that people have is that if they don’t feel sleepy yet, they don’t need to go to bed yet.”

What about factors we can’t control, like time changes?

Although time only changes by an hour in March and November, it can have some pretty serious consequences—particularly losing an hour in the spring to Daylight Saving Time. Researchers found that this time change made people lose 40 minutes of sleep on average. It might not sound like much, but on the Monday following the time change, the researchers have found that workplace injuries are more frequent and severe. When gaining an hour in the fall, researchers saw no difference in injuries or sleep loss before and after the time change.

Other studies have examined increases in traffic accidents and medical errors after the spring time change. “We’re getting up a little bit earlier, and that is actually a time of day when our performance and alertness are at their lowest points within the 24-hour cycle. So it may leave us a little more vulnerable to getting in a car accident on that day,” Duffy says.

What’s the best way to adjust to the time change?

For some, it may happen fast, and for others, it may take a few more days, says Duffy. For those who are really worried about adjusting, she advises preparing for the time change in advance by going to sleep 30 minutes later over two nights in the fall (or 30 minutes earlier in the spring).

Getting enough sleep leading up to a time change is also important. “If we are chronically sleep deprived, that may make it harder for us to make any adjustment,” Duffy says.

And, as a general rule of thumb to keep our bodies and rhythms happy, stay regular. “Regularity seems to be important for long-term health,” Duffy says. Eating and sleeping at the same time each day can really maintain our circadian rhythms. Consistent and sufficient sleep is “the best recommendation we have,” says Duffy. “You’re going to feel the effects much less than you would otherwise,” she says. After all, circadian rhythms know best.