Can you live on bread and water alone?

And does it matter which type of bread? 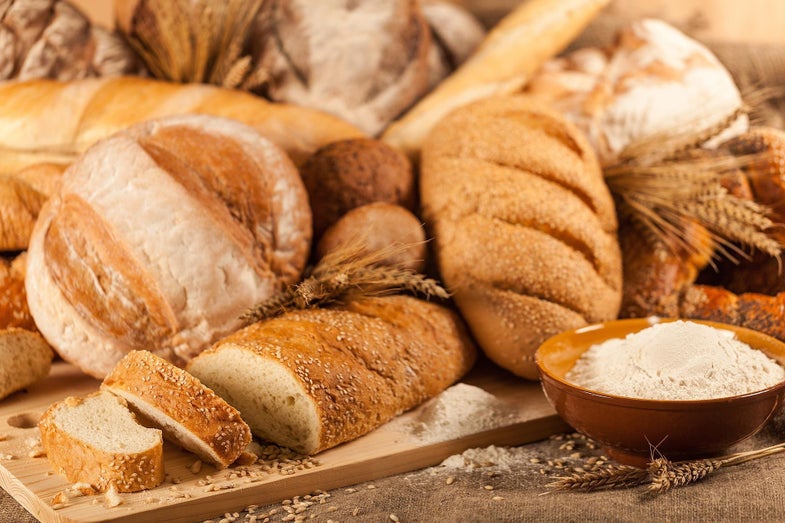 This post has been updated. It was originally published on October 30, 2017.

From a basket of warm focaccia on the table at a restaurant, to flat loaves of naan accompanying a curry, bread is incorporated into many, if not most, meals around the world. Everyone loves carbs, especially bread. So, wouldn’t it be awesome if we could literally live off of this beloved food group? The short answer is yes, yes, it would, but the larger question is; is it even possible?

You could probably survive on quality whole grain bread that’s been fermented for a while. But eventually you would run into nutritional deficiencies, and in all likelihood, you’d eventually get sick of the carb-laden substance.

Many people have wondered whether humans can survive on just one food item. The question is valid: Eating just one thing would probably save a lot of time and effort and potentially a good deal of money. Plus, many food items do pack a considerable nutritional punch. But none can contribute everything, which is the main reason humans have evolved eating a varied diet. For example, technically potatoes contain all the essential amino acids you need to survive. But many of those amino acids are present in such small amounts that even if you consumed far more than a day’s worth of calories in potatoes, you would eventually run into many nutritional deficiencies.

The same goes for bread, though not all kinds are nutritionally sliced equal. Unlike potatoes or rice which are stand-alone plants, this carb is created from the combination of grains and water and some type of microbe. These microbes, yeast and certain types of bacteria, break the grains down, exposing the nutrients within them that humans normally wouldn’t be able to access. As the environmental news outlet Grist points out, the end product, bread, is far more nutritious than its main ingredient, whole grain.

If you compared the nutritional benefits of porridge, which is essentially whole grains soaked in water, to traditionally-made bread, the latter would come out on top because the porridge didn’t go through that fermentation process which releases key nutrients from the grains. But that’s if you made the bread the traditional way. Many breads made today are created with a combination of white flour and commercial yeast—leaving out the whole grains and the nutrients they provide.

[Related: Can you survive on a single food forever?]

So, if you wanted to attempt to survive just on bread alone, it would need to be made with whole grains and probably a yeast/bacteria combination that’s been proven to ensure the proper combination and diversity of bacteria are there to break those whole grains down. Perhaps one of the best breads that achieve this is traditionally-made sourdough, which is created with a combination of yeast and lactobacilli, a type of bacteria. The fermentation process is slow, ensuring the nutrients inside the whole grains are exposed.

But even sourdough might not be enough to survive. Eventually, just like the potato scenario, you would probably run into nutritional deficiencies. Even sourdough bread made with wild yeast, bacteria, and whole grains likely will not provide enough nutrients like vitamin C, B12, and D, as well as calcium. Without these key players, humans would run into some serious problems. With no vitamin C source, a person could develop scurvy, which results in weakness of the muscles and fatigue. Calcium is necessary to prevent osteoporosis, which results in weakened bone mass. Plus, humans need fat to survive as well, which sourdough bread doesn’t have.

If you did attempt to eat one food for an extended period of time, you would probably get sick of eating the item far before you gave yourself any severe nutritional deficiencies. That’s due to a psychological phenomenon called sensory specific satiety. Scientists have found that the more you eat something, there’s a corresponding decline in pleasantness. But some foods are more prone to this than others (like high protein foods), and some researchers have found that bread might be in fact fairly resistant to this phenomenon.

While sourdough and other whole grain breads are extremely nutritious, they cannot provide everything. And sure, it might sound easy to eat the same thing for the rest of your life, but, for most people, it’s also probably incredibly boring. But if you want to simplify your diet, don’t fret. There’s plenty of simple food combinations, like rice and beans, yogurt and nuts, and pasta and vegetables that provide a more complete nutritional profile. But even with those, it’s always best to change those up as well. Eating the rainbow is still a pretty foolproof method.

Ask Us Anything
Nutrition
evergreen
food