With its latest fix, Hubble proves to be the telescope that just won’t quit

Fixing the renowned instrument took dozens of experts with decades of experience. 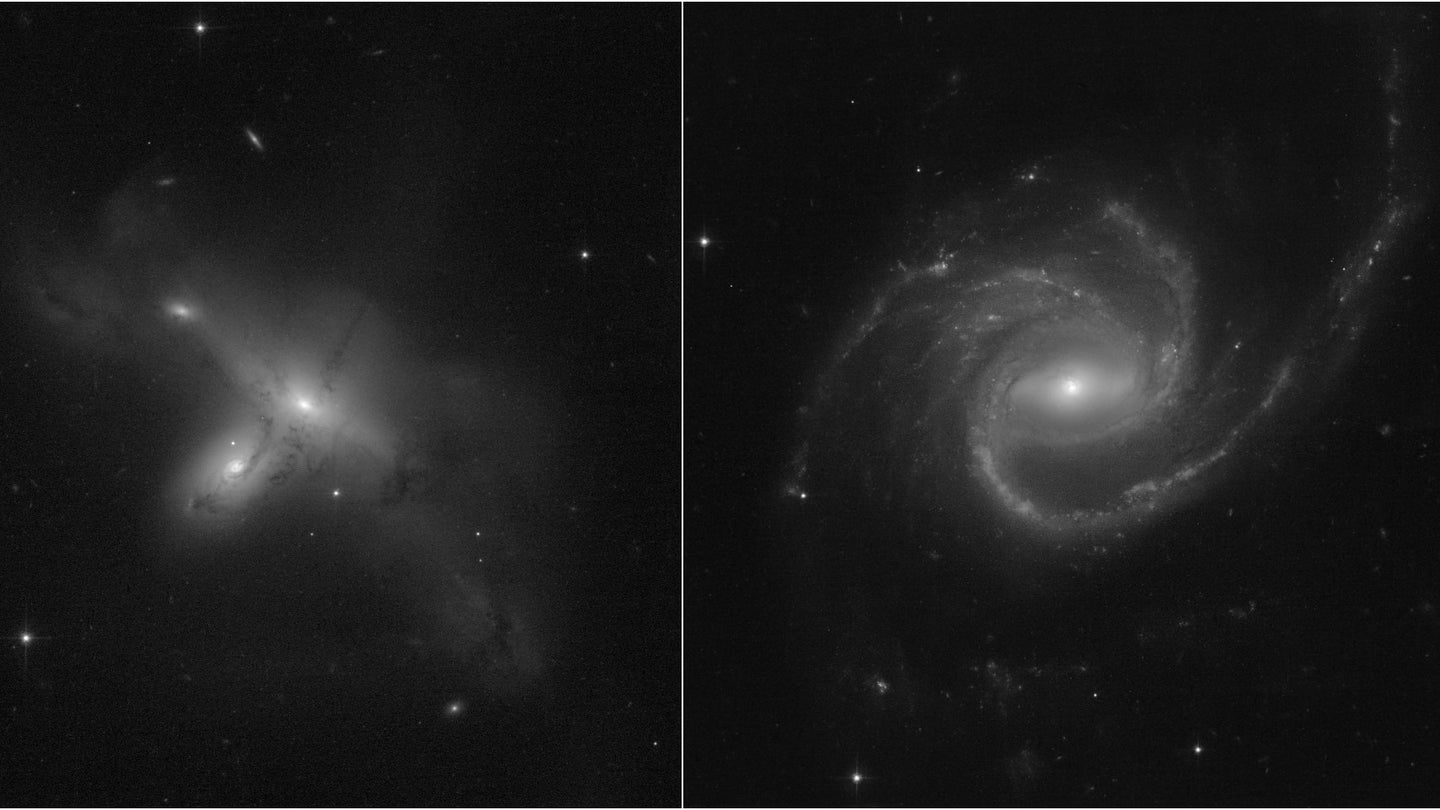 Some of Hubble's first images after getting back to work: an unusual galaxy pair (on left) and a rare three-armed galaxy (on right). Science: NASA, ESA, STScI, Julianne Dalcanton (UW) Image processing: Alyssa Pagan (STScI)
SHARE

After almost five weeks of going dark, the Hubble telescope is finally back in action as of Saturday, July 17.

Hubble halted suddenly on June 13, when its computers stopped properly communicating with each other. The malfunction placed the telescope in “safe mode,” deactivating all scientific observations and only retaining essential functions. NASA scientists, including a few who had previously worked on Hubble over the past decades, combined their expertise and rallied to find the root of the problem. They even resurfaced some of Hubble’s old, original paperwork—some documents 30 to 40 years old.

NASA engineers initially thought the error came from a degraded memory module, but that turned out to be a red herring. They then spent weeks tinkering and running diagnostic tests to pinpoint which of the other components could be responsible, eventually landing on the Power Control Unit, a piece of hardware that ensures the telescope receives a steady voltage supply.

[Related: The Hubble Space Telescope just turned 30, and it’s working better than ever]

Over the next two weeks, more than 50 people worked to plan and carry out the 15-hour operation to replace Hubble’s Power Control Unit—the team even ran everything on a high-fidelity simulator before committing to the whole affair. The procedure was complicated and unprecedented, almost like surgery in space.

“The main computer had to be turned off, and a backup safe mode computer temporarily took over the spacecraft. Several boxes also had to be powered on that were never turned on before in space, and other hardware needed their interfaces switched,” Jim Jeletic, Hubble deputy project manager at Goddard Space Flight Center, said in a statement.

The operation succeeded on July 15, and Hubble was fully operational and back on its scientific observations by July 17. In the few days since its return, Hubble has already imaged some unusual galaxies out in the cosmos, including a rare interacting galaxy pair 297 million lightyears away. It’s the first high-resolution glimpse of this sort of system. Another new Hubble image shows a large spiral galaxy that lies 490 million lightyears away. Its arms reach a whopping radius of 163,000 lightyears, three times more expansive than our Milky Way. But this galaxy is also peculiar: Most disk galaxies have an even number of spiral arms, but this one has three.

The Hubble telescope was built in the 1980s and first launched in 1990. Its original mission was to spend at least 15 years probing at the secrets of space—a goal it has far surpassed. On one hand, reliably using one instrument over the decades means that there is no shortage of resources to turn to in times of crisis like this. “That’s one of the benefits of a program that’s been running for over 30 years: the incredible amount of experience and expertise,” said Nzinga Tull, Hubble systems anomaly response manager at Goddard, in a statement.

On the other hand, Hubble was never intended to spend 31 years in action. With this malfunction, Hubble may be starting to show its age.