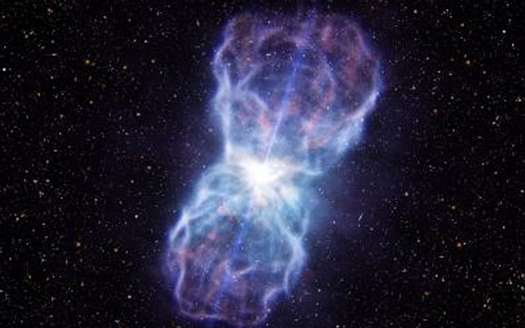 Astronomers have found a galaxy whose super-luminous nucleus–called a quasar–is burning 100 times as much energy as the entire Milky Way galaxy.

Though theory has long predicted that quasars this powerful should exist, the newly-discovered object, known as SDSS J1106+1939, is by far the most energetic ever observed. The quasar is powered by a supermassive black hole that lies at its center.

Scientists made the discovery using the X-shooter spectrograph instrument attached to ESO’s Very Large Telescope. The spectrograph split light coming from the quasar into its component wavelengths, allowing astronomers to observe the movement of material close to the quasar. The team calculated that the quasar is spewing an annual 400 suns worth of gas and dust, at a velocity of nearly 5000 miles per second.

Giant outflows like this one may be able to answer some big cosmic mysteries, like how the black hole at the center of each galaxy affects its size, and why there are so few big galaxies in the Universe.