The new prototype is the first nuclear reactor for space built in the U.S. since 1965. 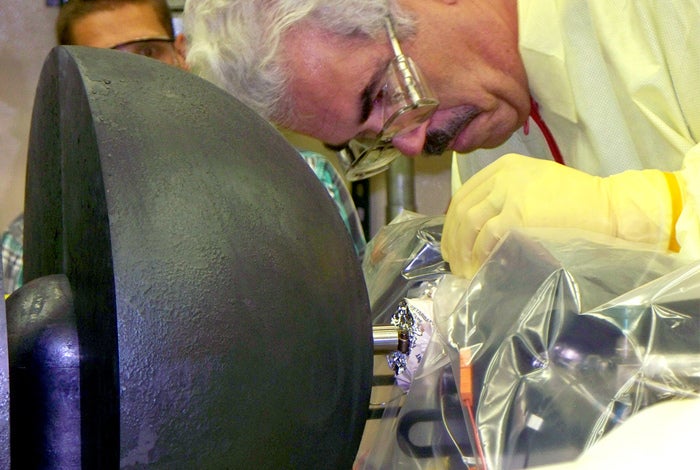 For spacecraft, you really can’t beat the efficiency and simplicity of a nuclear power supply. From the Pioneer probes to the Mars rover Curiosity, a nuclear battery allows a slow drip of electricity where solar power would be impractical or impossible, and fuel cells or other batteries would drain. But radioisotope thermoelectric generators, as these are called, give a spacecraft about a household light bulb’s worth of juice–and they need plutonium-238, an unstable and hard-to-obtain isotope.

Scientists tested a new heat-pipe-based nuclear reactor in a test called DUFF, for Demonstration Using Flattop Fissions, in an experiment near Las Vegas recently. It’s the first demonstration of a space nuclear reactor system to produce electricity in the U.S. since 1965, according to LANL.

It’s a very simple design, using heat from a uranium fission reaction and transferring it to a pair of Stirling engines. A four-inch-diameter cylinder of enriched uranium makes up the core, and heat pipes cool it down, moving this energy into the engines. These free-piston engines produced 24 watts of electricity.

A real space-based engine would have to get a lot hotter, and would be able to produce about a kilowatt of electricity, but the experiment proved the concept can work.

More efficient nuclear power supplies would help spacecraft do their work and transmit their data more quickly, according to LANL. It would also allow NASA to use less plutonium, using materials that are a lot easier to obtain.

Eventually, the reactors could be scaled up into spacecraft propulsion systems, providing a reliable and safe fuel source for long-distance travel, LANL says.