IKAROS would do well to watch its back, for the Japanese solar-sailing spacecraft may just have some competition that’s fast … Continued 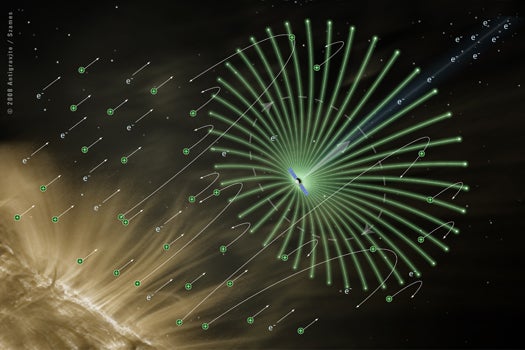 IKAROS would do well to watch its back, for the Japanese solar-sailing spacecraft may just have some competition that’s fast enough to catch up. The EU is funding a three-year project at the Finnish Meteorological Institute to build the fastest man-made device in the universe: an electric sail, or ESAIL, that researchers say could make Pluto in just five years’ time.

Like the more well-known solar sail, the ESAIL is propelled by solar radiation and therefore requires no chemical or ion propellant. But rather than actually unfurling a huge membranous sail to catch photons from the sun to provide thrust, the ESAIL repels protons.

The ESAIL consists of a bunch of thin metallic tethers that unfurl in a huge circular array around the craft. A solar-powered electron gun aboard the tiny central spacecraft keeps the tethers charged at a high positive potential. Since particles of the same charge repel one another, the protons in the solar wind push on the tethers, propelling the sail away from the sun.

Since the sail itself is extremely lightweight, it doesn’t take much – in theory anyhow, as these principles have yet to be tested in space – to get a ESAIL-powered spacecraft humming along at a respectable pace; some have estimated that after a year in flight an ESAIL could hit about 19 miles per second.

But first the team will have to make it work, a task the EU has put $2.25 million behind. If successful, they’ll have one hell of a fast spaceship. Whether it will be able to do the Kessel Run in less than 12 parsecs remains to be seen.