It has lost its parent star. 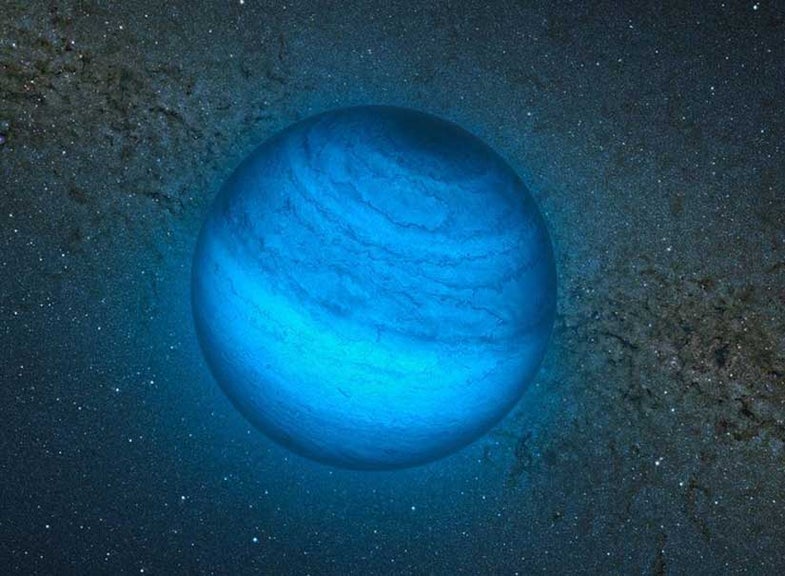 It’s lonely way out there in interplanetary space, lonelier still if you don’t have a star to call home. But this solitary life is all CFBDSIR2149 has ever known. Astronomers searching for the faint signatures of brown dwarf stars discovered this Jupiter-class giant hurtling through the cosmos with not star to orbit and nowhere in particular to be.

Discovered some 130 light-years from Earth, the planet is too dim to be viewed in the optical spectrum. But by analyzing its infrared emissions they were able to determine a few things about its chemical composition and its mass, which falls somewhere between four to seven times that of Jupiter. These kinds of starless planets aren’t unheard of, but they are relatively difficult to detect when they are out there on their own. Astronomers usually detect planets outside our solar system by either observing its transit of its star or measuring the wobble of the parent star caused by the orbiting planet’s gravitational pull.

Planets like lonely CFBDSIR2149 have no such star to draw observations from, and hence they are very difficult to spot–generally they either form far from their parent stars or are kicked out of their solar systems at a very young age. Which is a shame. A second analysis by the astronomers showed that CFBDSIR2149 has fallen in with a pack of young stars with which it is now traveling across the cosmos. No doubt that bunch is up to no good.