The universe is neither a computer nor a brain, but there are surprisingly similar laws to rule them all. 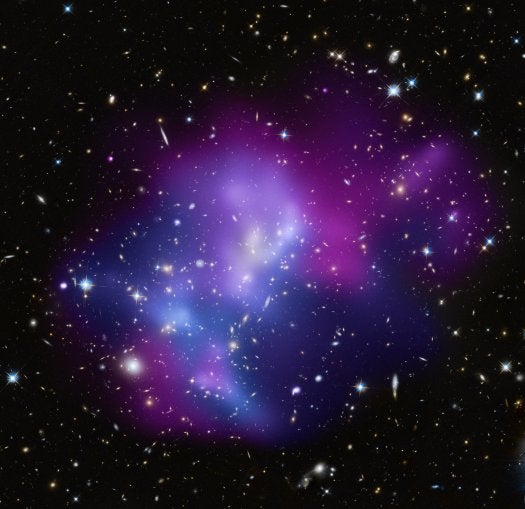 This composite image from the Chandra and Hubble space telescopes shows the massive galaxy cluster MACS J0717.5+3745 (MACS J0717, for short), where four separate galaxy clusters have been involved in a collision. The repeated collisions are caused by a 13-million-light-year-long stream of galaxies, gas, and a dark matter filament pouring into a region already full of matter. Dark matter is thought to greatly contribute to the large-scale structure of the universe. NASA/ESA/Hubble Space Telescope
SHARE

The structure of the universe is quite similar to the structure and design of other large, complex networks, like human brains and the Internet, according to a new study. This is not to say brains and universes follow some sort of master plan, though. Rather, it’s that the rules underlying the structures of such complex things can be understood in a similar way.

This is interesting because it suggests some kind of universal rule or system of laws controlling large systems. Network science is about unraveling those rules and trying to predict or control the behavior of complex networks.

“By no means do we claim that the universe is a global brain or a computer,” said Dmitri Krioukov, co-author of the new paper, which was published by the Cooperative Association for Internet Data Analysis at the San Diego Supercomputer Center (SDSC) at the University of California, San Diego. “But the discovered equivalence between the growth of the universe and complex networks strongly suggests that unexpectedly similar laws govern the dynamics of these very different complex systems.”

It’s not possible to simulate infinity, so the researchers assumed the universe is really huge–for the sake of having an input, they said it would be at least 10250 atoms of space and time (a 1 followed by 250 zeroes). That is very large. This was scaled down to a more manageable size and put into a supercomputer named Trestles. Trestles used this data to perform detailed simulations of the universe’s causal network, and computer scientists were able to do it in a day. Without parallel operations and some creative programming, this computation would have taken three or four years, according to SDSC.

The result is a graph that looks a lot like the visualizations representing other complex networks, like the Internet, social networks and biological networks, according to SDSC. “Who would have guessed that the emergence of our universe’s four-dimensional spacetime from the quantum vacuum would have anything to do with the growth of the Internet? Causality is at the heart of both, so perhaps the similarity Krioukov and his collaborators found is to be expected,” SDSC Director Michael Norman said in a statement.

This similarity in structure is probably not a coincidence, the researchers say. It might even be a step toward a new discovery of some universal rules. Maybe the rules are the same everywhere, but there are certain limiting factors–like gravity–that change the size and eventual outcomes.