The more we learn, the more we realize we don’t know. Radio astronomers at the University of Manchester in the... 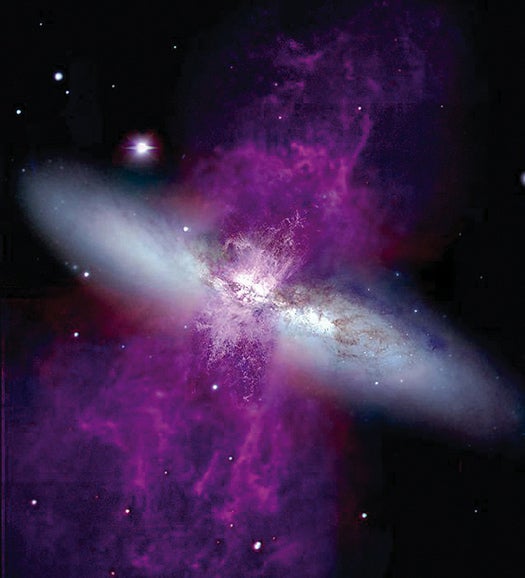 The more we learn, the more we realize we don’t know. Radio astronomers at the University of Manchester in the UK have discovered a baffling new object in a nearby galaxy that’s unlike anything we’ve ever seen in the Milky Way. It could be the first-ever detection of a micro-quasar, or a young supernova, or even an offshoot of the massive black hole that is believed to anchor M82. But the nature of the object has rendered each of those theories somewhat unlikely, leaving researchers casting about for answers.

The object appeared very suddenly last May at radio wavelengths and has persisted ever since, showing no signs of going away. It was originally thought to be a young supernova, as M82 is a known star nursery. But most of M82’s stars die quickly in massive stellar explosions — a new supernova generally occurs once every two or three decades — at which point their radio wavelengths begin a slow decay. The mystery object has shown no such signs of dimming.

It’s also been suggested that the object is related to the collapsing black hole at the center of M82, but its location is far enough away that many researchers think this unlikely. The third explanation, it seems, is equally nebulous: the object could be the first radio detection of an extragalactic “micro-quasar” jettisoning matter and radio emissions from an accretion disk around a collapsed star. But again, this theory is hamstrung by the few facts we do know about the object; if it is a micro-quasar (a phenomenon about which we know relatively little anyhow) it is much more luminous than any previous example we know of.

If it is a micro-quasar, it would be the first detected at radio wavelengths. As such, it could be an unprecedented opportunity for researchers to observe and learn. At 10 million light years away, identifying this mystery object likely won’t happen overnight. But the team is now assembling data from an array of 20 radio telescopes around the globe that should be able to confirm whether or not it is indeed a micro-quasar — or if it’s back to square one.