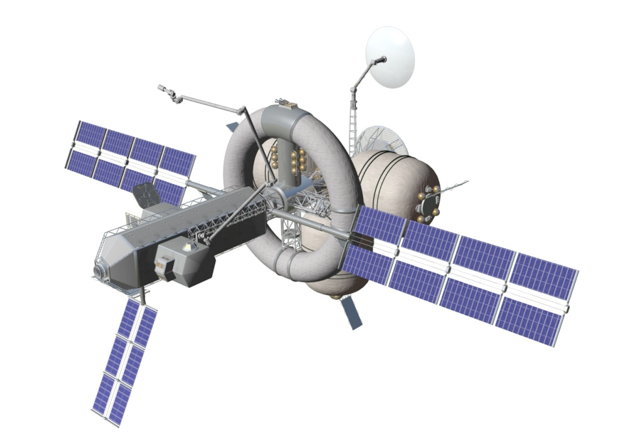 This tubular spacecraft could serve as a reusable vehicle for lunar and deep-space missions, holding a crew of six and enough supplies for a two-year expedition.

Dubbed Nautilus-X, for “Non-Atmospheric Universal Transport Intended for Lengthy United States eXploration,” this craft could be built in orbit and ready for space missions by 2020, according to a briefing by NASA’s Future In Space Operations group.

It would be assembled from expandable structures, such as the inflatable habitats proposed by Bigelow Aerospace. It would also contain a ring centrifuge to provide partial gravity, and radiation-mitigation systems that could include tanks of water or liquid hydrogen slush, reports the website HobbySpace.com.

Nautilus is a multi-mission space exploration vehicle, so it could incorporate mission-specific propulsion units, according to Edward Henderson of NASA Johnson Space Center. Theoretically, you could swap out engines and fuel depending on where you wanted to go. Such an all-purpose system would be simpler than building heavy-lift rockets for specific missions to the moon or Mars.

Henderson described the system at a briefing on NASA’s Technology Applications Assessment Team, which is studying (relatively) inexpensive, quick-turnaround technologies for space exploration. Check out the PowerPoint slides here. HobbySpace has a nice roundup of the meeting, which also included a DARPA-funded geosynchronous satellite servicing project, in-situ water recovery on the Moon, a project that would demonstrate space-based solar power beams, a solar electric propulsion vehicle, and propellant depots floating in geosynchronous orbit.

Nautilus is by far the highlight, however, with pretty specific schematics and development estimates. Construction would take at least five years and require two or three rocket launches. It would cost about $3.7 billion.

The centrifuge, which could help keep crew members healthy during a long trip, includes inflatable structures and pieces that must be launched into orbit. It would be fairly simple to test on the International Space Station — it would launch to the station on board a rocket, and if it works out, it could become living quarters for the station’s crew. 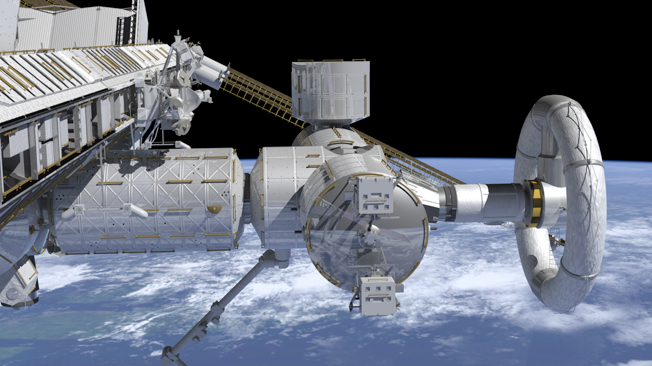 An artist’s impression of a centrifuge attached to the ISS.

These are dreamy ideas, to be sure, especially in light of federal funding roadblocks. But the use of existing technologies like Bigelow’s modules, as well as the adaptability of a multi-purpose crew carrier, means a system like Nautilus could play a role in NASA’s future.