BeerSci: Uncovering The Secrets Of Barley

Scientists sequenced the barley genome recently. Will this make for better beer? Or are the implications more nuanced? 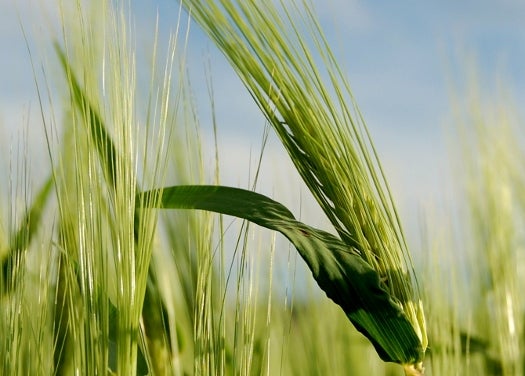 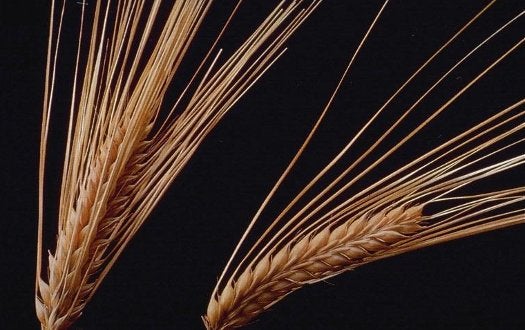 Brewers make note of which kind of barley they use: On the left, six-row barley. On the right, two-row barley.

Last month, scientists announced a big breakthrough in barley research: They had finally sequenced the entire barley genome. In response, some media outlets ran stories declaring that this will somehow result in better beer (barley being one of beer’s key ingredients). Sure, on some level, understanding the barley genome is going to yield better–or more, or cheaper–beer, especially if climate change goes down the way scientists suspect it will and crops become more difficult to grow due to substandard environmental conditions. But those media stories are missing the point: That kind of better-beer hyperbole is a bit like taking some NASA results from the Solar Dynamics Observatory and saying that the data will help you get a better tan. The implications of the research are much more complex.

Some background: Barley is a member of the tribe Triticeae along with other domesticated grains such as wheat and rye. These crops are among the earliest domesticated agricultural grain products–archeological evidence indicates that humans domesticated barley around 10,000 years ago.

What the International Barley Genome Sequencing Consortium published in the journal Nature last month was a draft–a partially complete map of all of the genes–of the barley genome. It was a remarkable feat, and it took years to overcome the technical hurdles: at 5.1 gigabases, the barley genome is 1.3 times larger than the human genome, and much of the barley genome is made up of repeating sequences, which makes it tough to figure out exactly where all of those redundant sequences go.

The purpose of the work is to, eventually, improve barley so it’s more resistant to disease and adverse conditions than current cultivars (specific varieties of barley that are specifically created to have a desirable characteristic), enrich the dietary fiber content of the plant and, yes, probably tweak the kernels so they are more efficient or better for beer production. 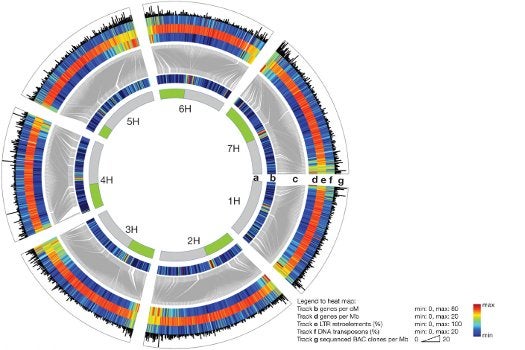 A variety of views of the barley genome. The first row, a, just shows each of the seven barley chromosomes: 1H through 7H. Rows b through g show different sets of positional data, including the locations of high-confidence genes along the physical map. tl;dr It’s a really complicated infographic.

But that’s a long way off. I spoke with Nils Stein, a researcher at the Leibniz Institute of Plant Genetics and Crop Plant Research in Germany and one of the principal investigators on the barley genome project, about the paper. Stein emphasized that what they published is only the very first draft of the genome. They have the physical map–the position of all of the individual letters–but they do not have the position of all of the genes on that map. Basically, that’s like knowing where all of the letters are in a novel, but not quite knowing how all of those letters break up into words. The members of the consortium do have some data: They were able to map the positions of 24,154 genes to the physical map, about two-thirds the number of genes (30,400) that barley is suspected to have in total.

In addition to that, they compared the genomes of different cultivars of barley. The main genome sequenced, Morex, is a six-row barley. I asked Stein why they considered Morex the best “baseline,” while all of the other cultivars they had examined were two-row barley. He explained that the USDA had done significant research on the Morex cultivar in the past–it is the one about which we know the most, and thus provided a good foundation for further research.

Why should aspiring homebrewers care? Because two-row and six-row barley behave slightly differently in the mash, which can have profound effects on brewing efficiency and characteristics of the finished beer (a complex phenomenon I’ll get into in a future column). I figured anyone nerdulent enough to want to know about genetic differences of cultivars would be curious as to which kind of barley was used in the single-nucleotide-variation study.

When consortium scientists compared the various six-row and two-row barley cultivars, they discovered that the chromosomal regions near the centromeres 1.) had many functional genes on them and 2.) did not display a great deal of variation within and, to a certain extent, between cultivars. The upshot is that only the ends of the chromosomes recombine–swap chunks of DNA–frequently. This will be something of a hurdle for future barley scientists to overcome: you can’t breed a better, more disease-resistant barley if the genes you need to transfer between cultivars during breeding just won’t recombine with each other. Stein did clarify that one could use gene modification techniques to target those difficult-to-access genes near centromeres, and he was also quick to explain that not all of barley’s genes reside in those areas–there are plenty of traits that traditional breeders can mess with. 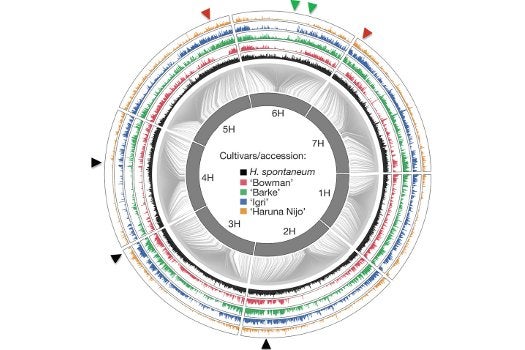 Researchers compared the Morex cultivar (labeled H. spontaneum) with four other cultivars. Note how the levels of variation dip near the center of each segment.

Going forward, Stein wants to more clearly comprehend the position of genes on the physical map and transcriptome–gene products such as protein or regulatory RNA–of barley, which will help scientists better understand how gene expression is controlled. That, in turn, would offer clues on how plant breeders can control gene expression themselves.

Stein also says that barley will make an excellent model genome for understanding related crop plants whose genomes are even more complex: Wheat, for example, is hexaploid (it has six copies of each chromosome; barley has two) and its genome is a massive 17 gigabases large. Like barley, wheat is one of the most important staple foods in the world and the crop will encounter the same environmental pressures–droughts, disease, pests, brackish water, substandard soil–as barley in the face of climate change.

So you can see that teasing out the myriad complexities of an organism’s genome and that genome’s temporal, spatial and structural organization is a hell of a task–but an important one that can’t be summed up in a 200-word news story.