If we wish to travel through time, we must be able to control it, to mold it to our own desires and specifications... 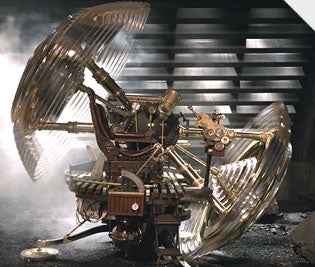 If we wish to travel through time, we must be able to control it, to mold it to our own desires and specifications. This is possible only through Einstein’s theory of relativity. Instead of imagining space as an immutable structure, part of Einstein’s genius was realizing that space and time are interlinked in a single, pliable framework called space-time. Both space and time can be distorted, sometimes dramatically. Time travel requires nothing more than exploiting those distortions to create a path through time that ends earlier-or much later-than it begins.

Here’s how it works: Imagine space-time as a taut rubber sheet. It appears to stay regular and flat, except when something heavy-say, a bowling ball-is dropped into the center. The extra weight bends the surrounding sheet, especially the part of the sheet that’s closest to the ball.

Since the space around the ball-our stand-in for a star-is distorted, other objects will be pulled in toward it. This effect is what we call gravity. But remember that the star bends not only space but time as well. This distortion is a cornerstone of all physically possible time travel scenarios. Time also becomes distorted when you travel quickly through space at speeds approaching that of light. By cleverly utilizing these two effects, physicists have devised some conceivable, though laborious, time travel scenarios, employing fantastic objects such as black holes, wormholes, and cosmic strings. See “The Physics of Time Travel” for more.