Long Theorized, Hawking Radiation Has Now Been Observed For The First Time 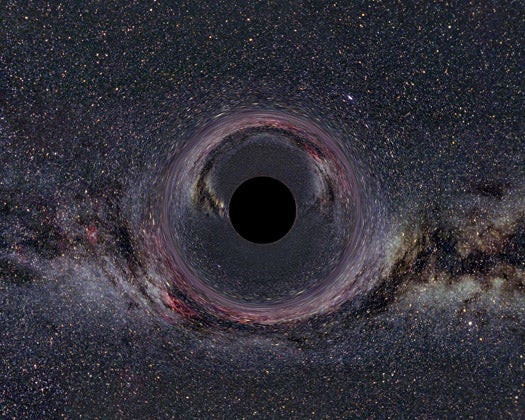 More than 30 years after Stephen Hawking predicted the existence of radiation emitted by black holes, physicists say they’ve finally observed the phenomenon for themselves, not in the heavens, but down here on Earth.

The universe is filled with particle/antiparticle pairs that form and almost immediately mutually annihilate, releasing their energy. Hawking radiation, as it’s known, occurs when these pairs form near the edge of a black hole. As the pair of particles crosses the black hole’s event horizon, one member is sucked in, while the other is set free — before they are able to annihilate each other. The observed effect is that the black hole is radiating particles, and actually losing mass.

Researchers at the University of Milan claim to have observed Hawking radiation in their lab by creating the inverse of a black hole – the aptly named white hole. Rather than all light being sucked inside, as happens with a black hole, in a white hole, light waves come to a complete halt, creating a different sort of event horizon.

Having formed this event horizon by sending an infrared laser pulse through fused silica, the researchers say they were able to rule out other phenomena and conclude that what they had observed was, in fact, Hawking radiation.

If this is true, the discovery could have huge implications for cosmology and many other fields. The only known way for black holes to evaporate is through Hawking radiation, so its effects on the eventual end of the universe could be huge.