Like a lot of suds on the top of your beer pour? Scientists have found a gene for that. 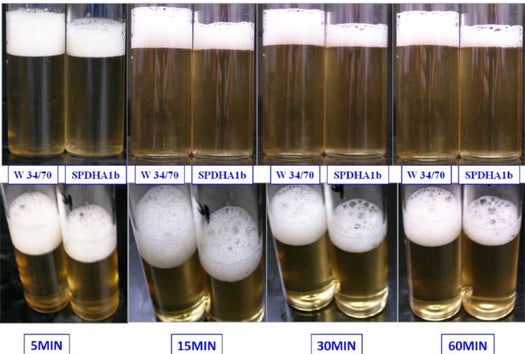 To determine the role of Cfg1p protein on beer foam stability, researchers made a strain of yeast that was lacking the gene associated with that protein. They then brewed beer with normal yeast (left test tube in each picture) and with the yeast lacking the foaming gene (right test tube in each picture). Blasco et al., Journal of Agricultural and Food Chemistry
SHARE

A couple of weeks ago, scientists from Australia and Spain published a paper in the Journal of Agricultural and Food Chemistry in which they reported finding a gene (and characterized the transcribed protein) in a particular yeast strain that made the resultant beer foamier, the first time scientists have ever done so. While knowing the identity of a particular yeast gene that promotes foaming isn’t going to be of much use to most homebrewers — unless you are a dab hand at creating recombinant yeast strains, in which case, have at it — it’s of interest to the greater brewing industry because understanding the creation and retention of a head on a glass of beer is an important quality control technique. The quality of foam on a pint is one of those things that consumers notice and subsequently use to, consciously or not, judge your beer.

So, what is beer foam? At its most basic, beer foam is a thin film of liquid, stabilized by various molecules including hop-derived organic acids and glycoproteins, around a volume of gas. Those glycoproteins–proteins with attached sugar groups–come in many forms, but today we are primarily interested in those called mannoproteins. That is, each protein chain has many mannose–a six-carbon sugar very similar to glucose–molecules attached to it. The protein part of the glycoprotein is mostly hydrophobic, while the mannose side-groups with their myriad -OH groups are hydrophilic. This dissimilarity between the two parts of the molecule is key to foam stabilization: the hydrophobic parts line the interface with the carbon dioxide gas, while the hydrophilic sugar groups hold onto a bit of the water in beer and keep the walls of the foam intact. 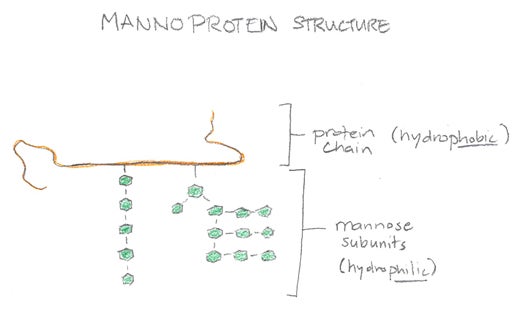 Mannoproteins are a protein — a polypeptide — onto which mannose (a sugar) molecules are attached. The protein, in orange, is hydrophobic, which means that it hates water. The mannose sidechains are hydrophilic: water-loving.

For a long time, brewing scientists thought that the primary source of those glycooproteins was malted barley. This makes sense, because one goes through two distinct processes in brewing to try to force most of that protein out of the beer: the hot break and the cold break. The hot break is kind of like when you make egg drop soup: the uncooked egg hits the hot water, the proteins in the whites denature, and the whole thing “cooks.” The cold break at the end of the boil forces other proteins to precipitate out of solution. Both sets of gunk are removed from the wort during filtering and while the beer settles in the primary and secondary fermenter. But even with all of this filtering, a lot of protein–including mannoproteins and the glutens that give celiac patients such grief–still floats in the beer. And those proteins are responsible for that froth on the top of your beer glass. 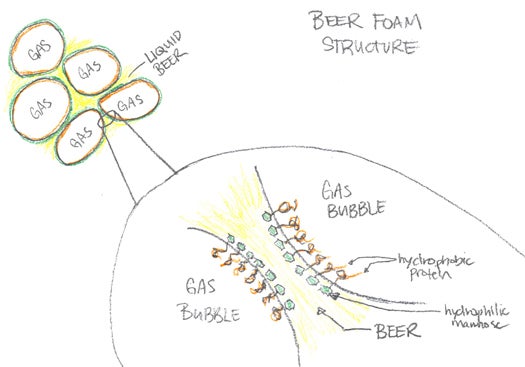 Mannoproteins stabilize the beer foam by interacting simultaneously with the gas in the bubbles and with the liquid beer. The hydrophobic parts of the mannoprotein (orange) line up along the interface between liquid and air. The hydrophilic parts (green) associate strongly with the beer to hold it in place.

Over the last few years, a series of papers has reported that some of the mannoproteins responsible for foam stability don’t come from the barley at all. They come from the yeast. Basically, as the beer ages and the yeast start to die, some of them autolyze (self-digest), and components of their cell walls–the mannoproteins–end up free-floating in the beer. Most of the studies were carried out on Saccharomyces cerevisiae ale yeast. But Blasco et al. found the gene and protein for a similarly functional mannoprotein in lager yeast, Saccharomyces pastorianus, which helps cement the claims that yeast proteins are crucial to beer foaming characteristics in all types of beer. The gene, called CFG1 (Carlsbergensis foaming gene 1), codes for Cfg1p, a 105 kiloDalton protein found in S. pastorianus cell walls that is very similar to those already found in S. cerevisiae. When the researchers deleted the CFG1 gene, the foam on the resultant beer looked pretty sorry–great news for beer drinkers who view a big foam head as a waste of space in the glass where beer could go.

But if you like lots of foam–maybe because you think it helps concentrate the hop aromas or it just feels right on the palate–you could probably replicate their results. The strain that the scientists say they used was Weihenstephan 34/70–a strain of yeast from Weihenstephan Abbey brewery, which at 972 years old claims to be the oldest continuously operating brewery in the world. You can get the Weihenstephan 34/70 in dry form from Safale as Saflager, or from Wyeast as 2124 (Bohemian lager) or White Labs as WLP830 (German lager). Happy foaming!