BeerSci: What’s The Connection Between Hops And Marijuana?

Because they sure look and smell alike. 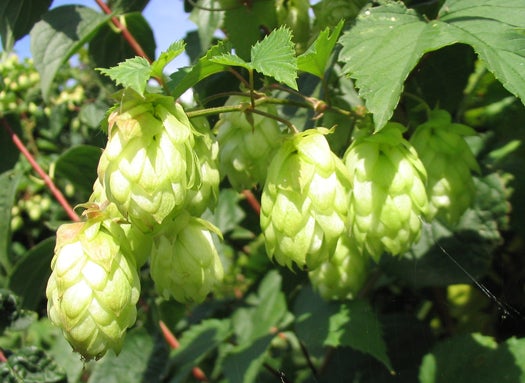 “Are hops and marijuana related?”

I’ve fielded that question many times, usually after someone has sampled an especially resinous IPA — although at least one PopSci editor asked me the same question when looking at a photo of the leaves of a hop plant.

The answer to that question is yes and no.

The fact that both Humulus lupulus (hops) and Cannabis sativa (marijuana) have similar organoleptic properties (taste and smell) could indicate a common ancestry–but it isn’t proof. Lots of plants make similar aroma molecules, known as terpenes and terpenoid compounds, including lemons (which make limonene), lavender (linalool) and conifers (pinene) — but none of them are closely related to cannabis or hops.

Terpenes are a class of organic compounds synthesized by cells. They all start with a particular base molecule, called isoprene. I won’t go into terpene biosynthesis here, but it’s important to remember that all terpenes are built up using one or more copies of isoprene. A few of the primary aroma terpenes in hops are myrcene, beta-pinene and alpha-humulene–these and similar aromatic compounds are also what give cannabis plants their characteristic smell.

Further, the major bitter compound in hops, the so-called alpha acids, aka humulone, is a terpenoid (derived from terpenes). The primary active ingredient in that dank you’re smoking, the tetrahydrocannabinoids, are also terpenoids. 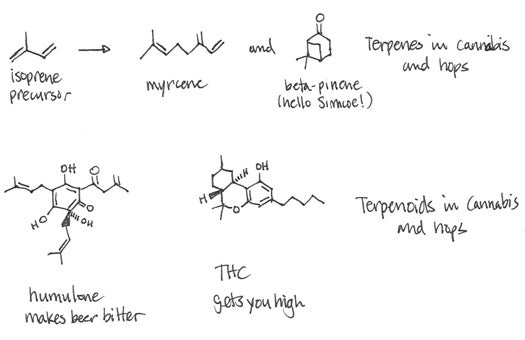 Common aroma terpenes — and precursor molecule isoprene — found in cannabis and hops on the top row. On the bottom, the terpenoids in hops that make beer bitter and make cannabis a psychoactive drug.

So, if terpenes are not exclusive to Humulus and Cannabis, how do we know they are related? The one nameless editor who noticed structural similarities in the two plants was more on the money.

Humulus and Cannabis are, in fact, two genera in the family Cannabinaceae, a taxonomic family that has endured a bit of a shakeup in recent history. In ye olden days of taxonomy, biologists would look for structural similarities between plants in order to group them. Botanically speaking, the leaves of plants in the Cannabinaceae family are generally palmately lobed and always have stipules. Additionally, they always have cystoliths (calcium carbonate crystals that sit in special organelles within the cell). Aside from “palmately lobed,” none of this means a whole lot to me, either, so I guess we will have to take the plant taxonomists’ word on it. 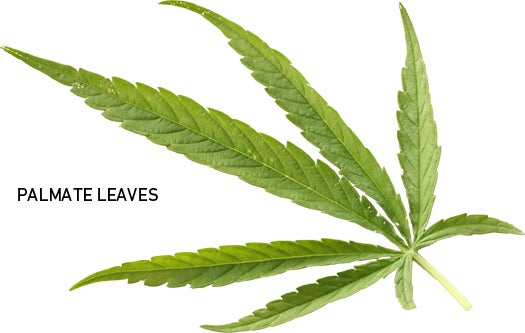 Both cannabis (above) and hops have leaves whose lobes (or veins) radiate from a common point, much like the fingers on your hand do.

Before the 1990s, all of these physical similarities put hops and cannabis into a single family, under a larger order called Urticales. And so it stayed, until molecular biologists started running the DNA through sequencers looking for similarities between genes, when they found out that the order Urticales wasn’t as special as they thought–it wasn’t even its own order. The situation became so frustrating to the flowering-plant taxonomists that in 1998 they organized the Angiosperm Phylogeny Group (like the Justice League, but with fewer secret identities) to sort the mess out. The APG published their take on the flowering-plant taxonomic system in 1998, and followed up with updates in 2003 and 2009.

(As an aside, microbiologists went through a similar problem. I am sure that most readers will remember the terms “gram positive” and “gram negative” from biology class, terms used to describe certain kinds of bacteria based on whether they could be dyed with crystal violet. That phenomenon, coupled with the shape of the bacterial cell (rod-shaped, round, or corkscrew), was the original basis for all bacterial taxonomy. In no surprise whatsoever, it turns out that shape is generally a piss-poor method to determine evolutionary relationships among bacteria. These days, microbiologists look at the sequence of the 16S ribosomal subunit to separate bacteria into different taxa.)

In 2002, a group of plant and molecular biologists in the US and UK looked at the structural characteristics, cellular organelles, latex-producing-properties (or lack thereof) and DNA sequences of a select number of genes for all of the plants originally in Urticales and related taxa. The upshot: by comparing sequences of rbcL, trnL-F, ndhF and matK DNA regions, they confirmed that Humulus and Cannabis were very closely related and belonged in a single family, Cannabinaceae. They also found that the Cannabinaceae family shares a common ancestor with other families, and thus all of those families needed to be lumped together. Confusingly, because Cannabinaceae is the older name, this bigger group is also called Cannabinaceae, under the order Rosales.

The upshot of all of this: 1) Don’t become an angiosperm taxonomist unless you love frustration, because 2) taxonomy can be a giant pain in the butt. 3) Best thing to do is bust out a bottle of homebrew.

And yes, before you ask, homebrewers have made marijuana beer. Details online are thin, because the homebrew forums actively discourage discussion of it and the pothead forums are teeth-clenchingly imprecise. All I’ve found is 1) dry your bud first, then 2) don’t add it to the boil without first soaking it in water to get the worst of the water-soluble tars out. I have no idea why people don’t try to dry-pot their beer — despite the worries I’ve read from these pot-brewers, the chances of contamination from the plant is very low, especially if you pasteurize it first. As for style, I’ve seen reports of a very dark ale recipe. Anything with a good malt backbone should be enough to dispel whatever gnarly flavors might develop. Finally, THC is alcohol soluble, so you probably want your beer to be in the 8% ABV range for maximum extraction. (Or just go the cheap and cheery route and extract it in vodka, then throw that in during bottling/kegging.)

And no, BeerSci has not tried any.