Scientists are on the hunt for exo-Earths, distant cousins of our planet that are just the right distance from their... 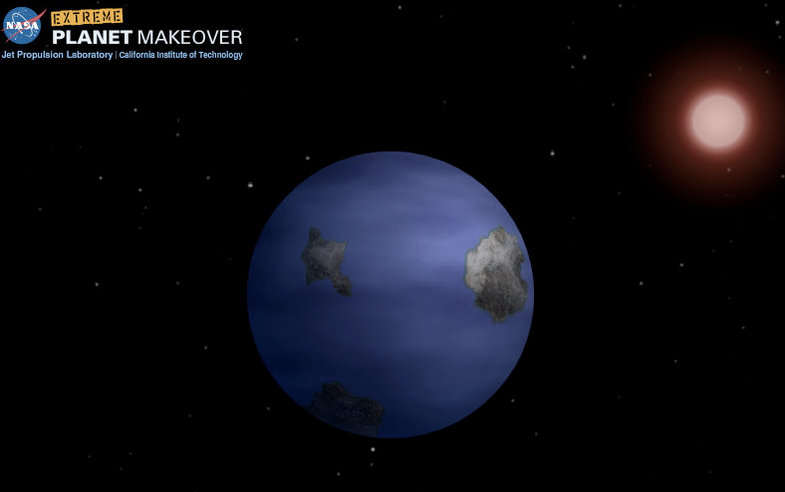 Scientists are on the hunt for exo-Earths, distant cousins of our planet that are just the right distance from their stars to harbor liquid water and other ingredients for life. But even with plenty of data and some educated guesses, no one will ever see what these faraway worlds look like, so we’re left with the creative concepts of NASA artists. NASA’s new interactive game lets you use your own imagination to build a habitable planet.

NASA’s Jet Propulsion Laboratory, home to some of the most creative digital artists in the country, has a new interactive game that lets you build an exoplanet, using pre-sets for Mars, Earth and Gliese 581d, a rocky super-Earth about 20 light-years away.

By messing with the planets’ size, age and distance to their stars, among other factors, you can learn interesting lessons about planetary science, namely why it has been so difficult to find a planet habitable for humans.

Move your planet too close, and the water boils away, leaving it a lifeless rock. Make the star too dim, and the planet will freeze over. Embiggen your world too much and its atmosphere becomes too thick, turning it into a gas giant–and so on. Most choices lead to such unappealing backup-planet types as “Hot Rock” and “Ice Ball.” When you’re done playing God, you can download a picture of your planet.

Extreme Planet Makeover was developed in conjunction with NASA’s Virtual Planetary Laboratory, whose scientists build computer models of Earth-sized planets to figure out what they might look like.