As astronomers continue mining data from the Kepler telescope, the planetary peculiarities keep on coming. We’ve already seen the smallest... 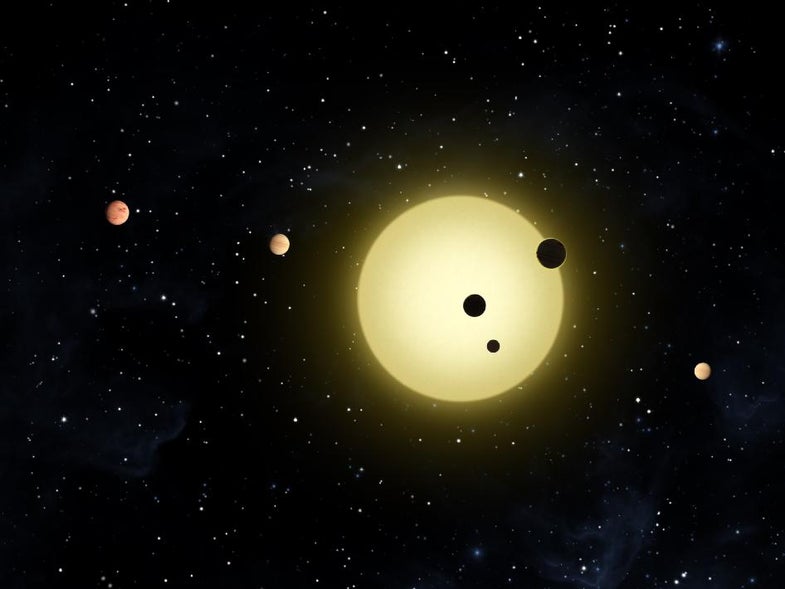 As astronomers continue mining data from the Kepler telescope, the planetary peculiarities keep on coming. We’ve already seen the smallest rocky world, 54 planets in a Goldilocks comfort zone around their stars, and even the possibility of planets sharing the same orbit. Add to that mix planetary resonance and superfast exoplanet “years.”

Last month, Kepler scientists announced a trove of 1,235 planetary candidates, at least 15 of which are definitely planets. Scientists are in the process of determining whether the rest of the objects are planets, too, or if they’re binary stars or something else. So far, the Kepler “Objects of Interest” are pretty interesting.

Take KOI 191, which involves four planets in unstable orbits. Jack Lissauer, a co-investigator for the Kepler mission at NASA’s Ames Research Center, tells International Business Times the planets are probably in resonances that keep them in their places — orbits that cross each other but don’t come very close.

This is the case for Pluto and Neptune, which are in a 3:2 resonance. For every three times Neptune orbits the sun, Pluto orbits twice, and the cycle repeats every 500 years. Their dance keeps their orbits stable, which Lissauer says might be the case for KOI 191.

Lissauer and other Kepler scientists submitted a research paper last week saying they had found planets sharing the same orbit, which would be possible if they inhabited a Trojan configuration — named for a Jovian example involving some asteroids. In such a system, involving a planet and a star, there are Lagrange points 60 degrees ahead and 60 degrees behind the planet in which a smaller body can safely orbit. But now, Lissauer says he’s skeptical of this interpretation of KOI 730, and that a resonance system could explain the shared orbits. If that’s the case, the four planets in KOI 730 would have orbits in the resonances 8:6:4:3. In other words, there are two pairs of planets, and each time the first member of the pair makes three orbits, another planet completes four, IB Times explains.

Finally, there’s KOI 500, which has five planets with orbital periods ranging from under one day to 9.5 days. If confirmed, the planets will be in some of the smallest orbits ever found, with the innermost planet staying toasty despite the star’s relatively cool temperature.

Just a few months ago, exoplanets — and especially exoplanet systems — were a rare and compelling find. Now that we know they’re a dime a dozen, their individual characteristics are becoming the most interesting aspect of exoplanet research. Stay tuned as more and more Kepler data reaches the scientific literature.