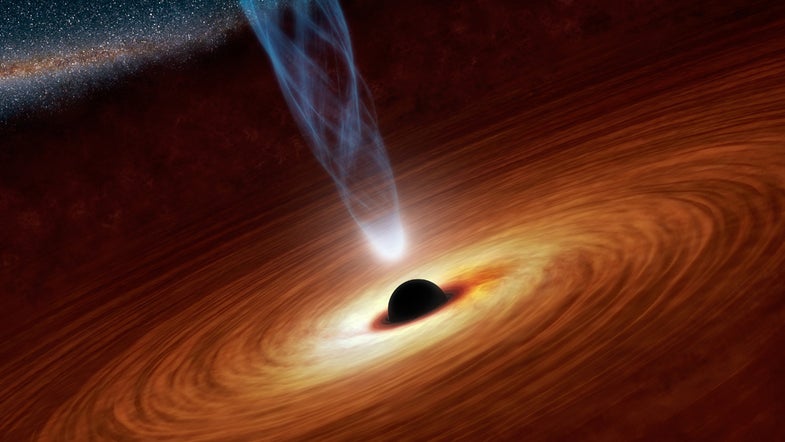 This artist's concept illustrates a supermassive black hole with millions to billions times the mass of our sun. It's surrounded by matter flowing onto the black hole in what is termed an accretion disk. Also shown is an outflowing jet of energetic particles, believed to be powered by the black hole's spin. High energy X-radiation lights up the disk, which reflects it, making the disk a source of X-rays. The reflected light enables astronomers to see how fast matter is swirling in the inner region of the disk, and ultimately to measure the black hole's spin rate. NASA/JPL-Caltech
SHARE

Nothing can escape a black hole, even light, because to wrench away from its titanic gravitational pull, you’d have to move faster than light is capable of traveling. And nothing can do that, as far as anyone knows. As matter falls into a black hole’s gaping maw, it superheats to millions of degrees, screaming a final cry of X-rays as it is torn apart. At a specific point called an event horizon, the matter disappears and is never heard from again.

A pair of X-ray telescopes recently watched some of these X-ray death gasps and were able to figure out how fast a black hole is spinning. This is “hugely important” for black hole science, according to researchers working with NASA’s Nuclear Spectroscopic Telescope Array, or NuSTAR space telescope. One particularly cool finding: The black hole is spinning almost as fast as Einstein’s theory of gravity says it possibly could. It’s spinning at almost the speed of light.

The galaxy in question is called NGC 1365, which is about twice the size of the Milky Way and located about 60 million light years away. The black hole is about 2 million times more massive than the sun. Scientists using NuSTAR and the European Space Agency’s XMM-Newton satellite wanted to measure how fast it is spinning. This is a key feature of black holes that is related to their size and the way they gobble up stars, gas and even other black holes.

The problem is that black holes are hard to study, because, you know, not even light can escape them. To measure them, you have to measure their effect on their surroundings–like the X-rays emitted by dying matter. This is hard to do because objects between us and them can get in the way, however, making the X-rays look distorted. There have been two competing models explaining why the X-rays look warped: Either gravitational distortion caused by black hole gravity, or distortion caused by intervening clouds of gas and dust.

In this new study, NuSTAR and XMM-Newton set out to determine which one is right. The telescopes carefully traced the X-rays emitted at the very, very edge of the black hole, right near the event horizon, or the point of no return. By combining their distinct viewing abilities, the two telescopes were able to see a wide range of X-ray energies, and figure out that the X-rays are not actually distorted by intervening gas clouds. They look distorted because the black hole is spinning, and its immense gravity warps spacetime as it swirls around. This information was used to tell just how fast the black hole is spinning: Just below the universal speed limit.

Along with new information about this particular black hole, this study suggests that black hole observations can remove a little bit of ambiguity. This will help astronomers continue to unravel the mysteries of these galactic monsters. A paper describing the findings is published this week in Nature.