The 'temperature-tolerant chocolate' stays solid at temperatures that would turn conventional chocolate into a gooey mess. 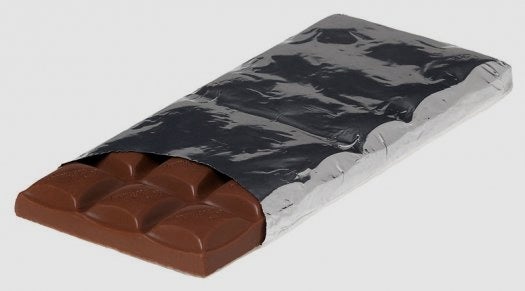 We’ve known since the advent of the cream-filled Cadbury Egg that scientists at the confectionary company like to play fast and loose with the rules of chocolatiering. But the latest development out of Cadbury’s R&D facility in Birmingham, UK, has us wondering if they’ve crossed that delicate line between genius and madness. They call it “temperature-tolerant chocolate.” But let’s call it what it is: chocolate that doesn’t melt.

At least, it doesn’t melt like regular chocolate does. The new stuff remains solid–very solid, so much so that you can reportedly press on it with a finger after exposing it to 104-degree temperature for hours and it will maintain its form, defying the scientific laws of chocolate which clearly state that standard chocolate should melt at 93 degrees.

A patent filing for the process explains how this happens. In chocolate production, there is a process called conching in which a container filled with metal beads grinds all the ingredients (cocoa butter, milk, sugar, oils, etc.) together. During this step, Cadbury has figured out a way to shear sugar particles into much smaller pieces than before, and somewhat counterintuitively (because one would think that this would create more surface area on a given volume of sugar) less fat ends up coating those sugar particles. This is because these smaller particles don’t get completely coated in fat, and parts of their surface areas remain exposed. “Such exposed sugar particle faces contribute towards a more sugar continuous system (sugar matrix),” the patent filing reads, “reducing the percentage of fat coated sugar particles which is believed to be advantageous for temperature tolerant properties.”

With its now-improved sugar matrix, Cadbury can now sell more chocolate in warmer climates, particularly in the developing world where, to quote the patent filing again, “the supply chain is ill-equipped to handle significant temperature/humidity fluctuations and where product quality is compromised.”

Seems hard to believe that product quality hasn’t already been compromised amid all of this tinkering with the material makeup of something so beloved and universally recognized as chocolate. One of the nicest things about chocolate is its natural synchronicity with the human body temperature–it stays solid until you put it in your mouth, at which point it melts magnificently (in case you’re curious, apparently the pressure of chewing breaks down this sugar matrix enough that the chocolate does soften, at least enough to be ingested and digested).

Anyhow, many of us may never know what this augmented chocolate tastes like, or whether Cadbury has taken science too far. The company only plans to distribute it in warm-weather countries that lack the supply-chain infrastructure to deliver conventional chocolate reliably to market. That means huge potential markets like India and Brazil could soon be awash in temperature-tolerant chocolate–the U.S. and Britain, much as we may want it, don’t get any.