Big Bang Recreated in a Metamaterial, Offers Evidence That Time Travel is Impossible

Metamaterials can be used to create desktop black holes and simulate multiverses; now a physicist is using them to prove... 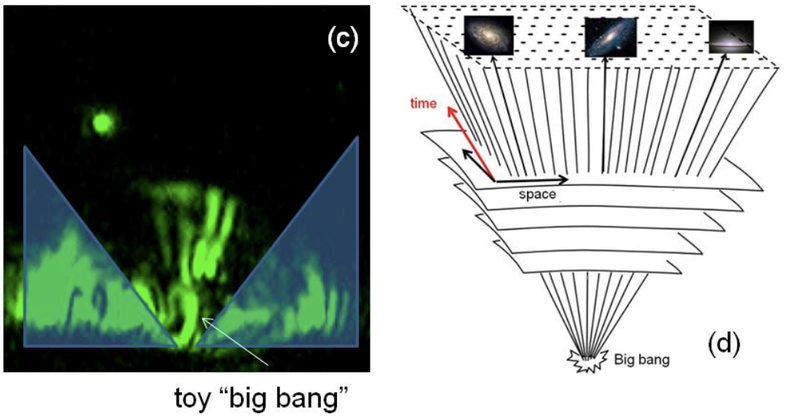 Metamaterials can be used to create desktop black holes and simulate multiverses; now a physicist is using them to prove time travel can’t happen.

In a new paper, University of Maryland professor and metamaterial theorist Igor Smolyaninov says mapping light distribution in a metamaterial can serve as a model for the flow of time. The model shows that the forward direction of time is unrelenting; you cannot curve back on time and go back to where you started. You just have to build a desktop Big Bang to prove it.

Metamaterials can help with this, because they are engineered to exhibit properties that don’t exist naturally. You can manipulate a metamaterial to make space-like dimensions appear time-like, Smolyaninov writes. The way that light moves in such a metamaterial is akin to the way that a particle moves through spacetime (click through to Tech Review’s arXiv blog for a more thorough explainer).

In such a metamaterial, the pattern of light rays spreads out — the separation of their “world lines” increases — as time goes by. And the light scatters, which is an analogue for entropy, the thermodynamic arrow of time that tells us things fall apart.

To test this theory, Smolyaninov and a colleague built a Big Bang simulator, placing plastic strips on a gold substrate. Tech Review explains that the “light rays” shining through it are actually plasmons (a clump of excited electrons in a conducting material) that propagate across the surface of the metal. The plastic strips distort their light.

On the plus side, Smolyaninov has already showed how metamaterials can help us study extra-dimensional multiverses. So even if we can’t travel back in time, maybe we could visit alternate universes, in which the past was already different.