It’s a shame about Pluto. Now that the astronomical community has downgraded the once-furthest planet from the sun to non-planet... 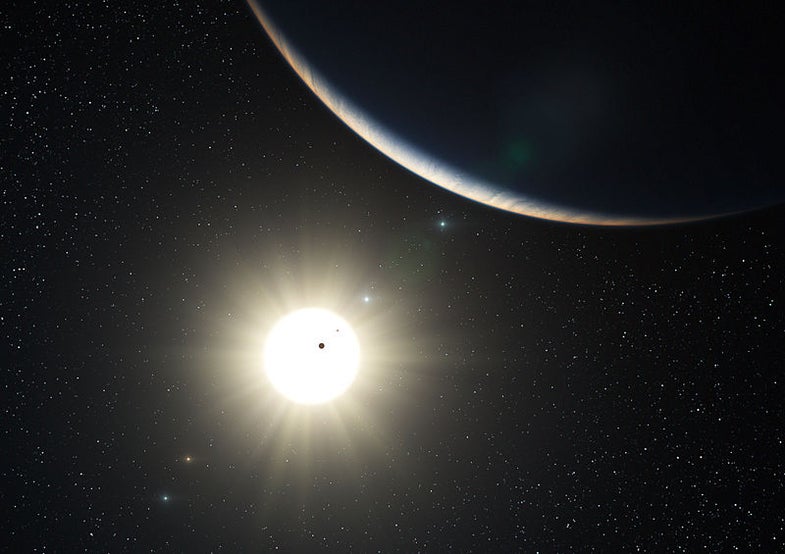 It’s a shame about Pluto. Now that the astronomical community has downgraded the once-furthest planet from the sun to non-planet status (technically it’s now referred to as a protoplanet or dwarf planet), our solar system is at risk of being unseated as the largest known planetary system in the universe. An astronomer at the University of Hertfordshire has revisited data related to nearby star HD 10180 and discovered that it very likely has nine planets, making it the most populous known solar system.

Astronomer Mikko Tuomi made the discovery by applying new kinds of statistical analysis to old data gathered when HD10180 first became a point of interest in the Hydrus constellation back in 2010. At that point the star–just 130 light years away–was thought to have five planets, all giants with masses akin to Neptune and Saturn. A sixth planet then surfaced in the data, which describe the way the star wobbles as the gravity of its planets tug on it.

By combing back through the data using different techniques for analysis, Tuomi found evidence for three more planets, all very small (ranging from 1.3 to 5.1 times the size of Earth) and all very close to the star (the closest of the new planets orbits the star in just 1.2 days, the furthest in only 68 days). That, of course, puts them way too close to the star to be considered potentially habitable. But they do put HD 10180 in a class by itself when it comes to planetary population.

This, of course, all depends on the discoveries being confirmed. Tuomi thinks that his new findings confirm the existence of the seventh planet in orbit around HD 10180, but the other two still require more evidence before they can be considered fully confirmed planets.