Inside the World’s First Manmade Batcave Built For Wild Bats

To fight deadly white nose syndrome, The Nature Conservancy has built an artificial cave, which now awaits its first tenants. 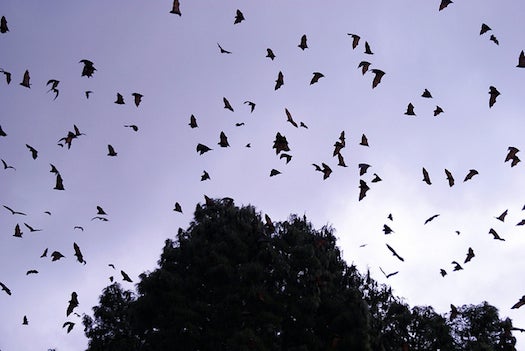 CLARKSVILLE, Tenn. — Up a crunchy gravel road not far from the Kentucky line, buried in a hillside a few steps from a huge limestone cave network, an audacious experiment is about to take place. The first-ever artificial cave for hibernating bats, built specifically to protect the animals from a debilitating fungal disease, is almost ready to welcome its first residents.

At this point in the season, the bats of Bellamy Cave are still in their summer roosting colony. When temperatures drop and fall takes over, they’ll move to a midseason staging area to acclimate their bodies, and by mid-October — depending on the weather — they’ll fly into their winter cave to sleep the cold away. The Nature Conservancy hopes they’ll pick the customized 78-foot-long, 11-foot-high concrete cave instead.

Sick of watching helplessly as hundreds of thousands of bats die from a disease known as white nose syndrome, the Conservancy’s Tennessee chapter decided to build the new cave as a sanitary hibernaculum. Made of modified road culverts and adorned with metalwork from which bats can suspend, it can be disinfected every spring. The aim is to reduce the amount of Geomyces destructans spores that can attack the bats’ wings and faces, blanketing their noses in a snowy fuzz of fungus.

“It’s too depressing to count sick bats and dead bats,” explained Gina Hancock, Tennessee director for the Conservancy. “There’s something about seeing them outside, in the winter, and dead on the ground. There’s just something heartbreaking about it.”

Tennessee has more documented caves than any other state, and it’s home to hundreds of thousands of bats, 16 species in all. About 265,000 of them, mostly gray bats, live in the Bellamy Cave network, where white nose syndrome was first documented this March. The artificial cave can hold at least 160,000 of them.

The artificial cave is outside of Clarksville, Tenn., about 20 miles south as the crow flies from the sprawling complex of Fort Campbell, Ky. The only neighbors are a few small homes with chickens in their front yards. When I pulled up, there was not a person in sight nor a sound to be heard; it was like some Stephen King plot where everyone slips through a time rip without warning. I side-stepped down the steep hill toward the woods, figuring I would stumble upon the cave, and finally I head the dim echo of a human voice. The Tennessee drawl of Cory Holliday floated up the cave entrance and into the air.

When you go into a cave and there’s no bats, it’s pretty depressing. It’s just a miserable day. It’s very motivational to do something like this.

Holliday, director of the Cave & Karst Program for The Nature Conservancy in Tennessee, stood in the bowels of the artificial cave — it doesn’t have a name yet — and pointed out its bat-friendly features. Curled fan belts and netting attached to the ceiling will provide a comfortable hibernating spot for gray bats and Indiana bats, and crevices in the wall will welcome Eastern small-footed bats. A rainwater pipe will bring in moisture to maintain the cave’s humidity levels and provide drinking water, and an air chimney will provide ventilation. It will also have surveillance cameras so humans can keep an eye on the bats without disturbing them. Two 1.5-ton air conditioning units will run for the next few weeks to drop the cave’s temperature to the required range, between 41 and 50°F, and Holliday is still working on getting the humidity levels right.

It’s built from huge concrete culvert pieces, the same structures that provide waterways under roads and highways. The Nature Conservancy designers added extra texture on the ceiling to give bats a foothold. The 17- to 20-ton sections fit together like Tinker Toys — a modular design that kept the price low and could be easily replicated elsewhere, if it works.

“We’ve got to try,” Holliday said. “When you go into a cave and there’s no bats, it’s pretty depressing. It’s just a miserable day. It’s very motivational to do something like this.”

Though the cave was simple to construct — it was built in a week in late August for $300,000 — engineering it to the bats’ specifications was a challenge, Holliday explained. Natural hibernacula contain a cold air trap, which keeps the bats’ body temperatures low enough to remain in torpor. To create a cold air trap, the ceiling has to be lower than any entrance, so cold air will sink into the cave and remain there. It has to provide air flow through two entrances, which must be at different levels, and it has to be underground. The artificial cave is buried beneath four feet of dirt, Holliday said.

Why go to all this trouble and not just sanitize the real cave instead? That would collapse the entire cave ecosystem, explained Sally Palmer, director of science for the Tennesee Conservancy. Spraying caves with fungicide to kill G. destructans would kill beneficial fungi, too, and then fungus-eating creatures would die, and so on — insects, amphibians and even fish make their homes in caves. “It would wipe out the food web,” Palmer said.

The artificial cave won’t prevent the white nose fungus from entering, but if wildlife managers can clean it every spring, the cave will be safe when the bats come back in the fall. If an infected bat can make it through the winter, it will heal throughout the summer — so keeping the caves’ spore count lower would help. 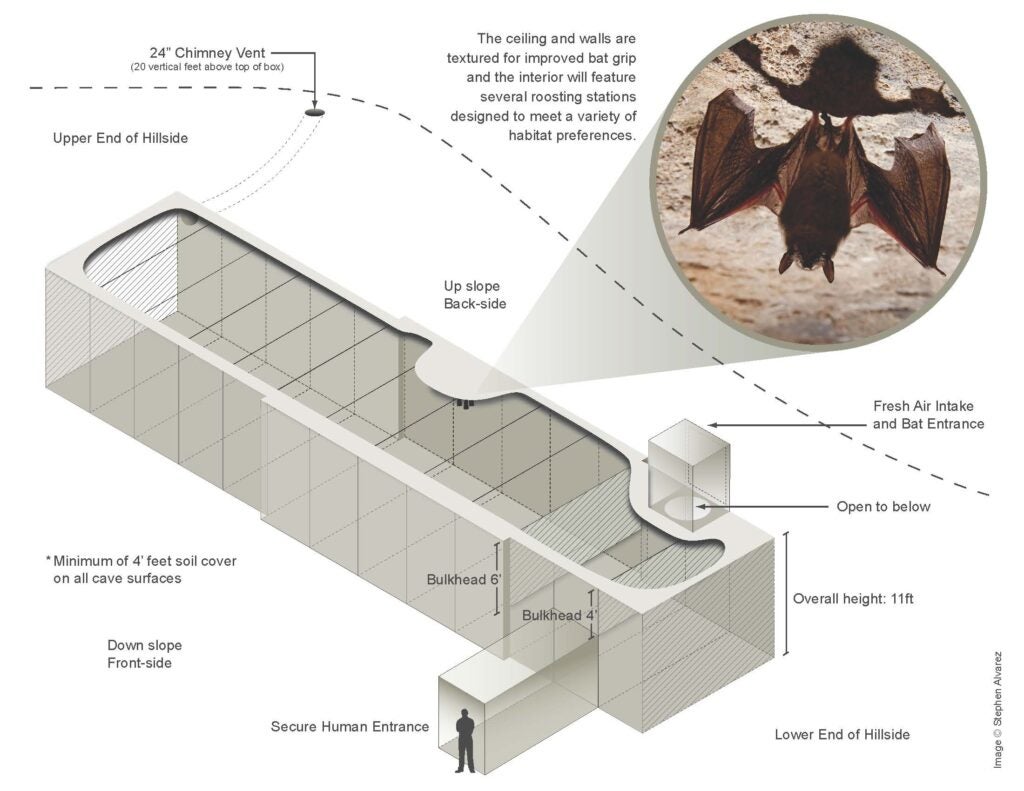 Here’s an annotated graphic of what the bat cave looks like, and what it’s designed to do. .

Half of Tennessee’s bats are susceptible to white nose syndrome, which has decimated the animals throughout the Northeast and Atlantic regions since it was discovered in 2006. About 5.5 million bats have succumbed so far in the U.S., according to the best estimates from state and federal wildlife officials. The G. destructans fungus damages the bats’ wings and causes them to wake up when they should be in torpor. This burns their fat reserves too early, and the animals either starve to death or try to leave their caves in the dead of winter in search of food, instead dying of exposure.

The disease is turning up farther west every spring, and there’s not much people can do about it other than count bats to keep tabs on them, protect cave entrances and hope for the best. The artificial cave could be a lifesaver, and wildlife officials from several state and federal agencies are watching closely to see how well it works.

“I think people were waiting for the first person to stick their neck out,” Hancock said. “We’re less risk-averse than our public partners.”

Even after all this effort, no one is sure if the bats will come in. There’s good evidence to suggest they will — bats are always seeking out different habitats — but it’s not a sure thing. If they don’t, The Nature Conservancy can still use the cave as a field laboratory, Holliday said. They might bring some bats into the cave for testing, or they might try out new fungicides.

If it does work, the artificial cave could be a model for other projects around the country, according to Hancock. She is even interested in working with the military to use abandoned bunkers, or to use artificial caves as captive breeding sites.

To entice them, The Nature Conservancy is installing ultrasonic speakers that will play bat calls common this time of year. 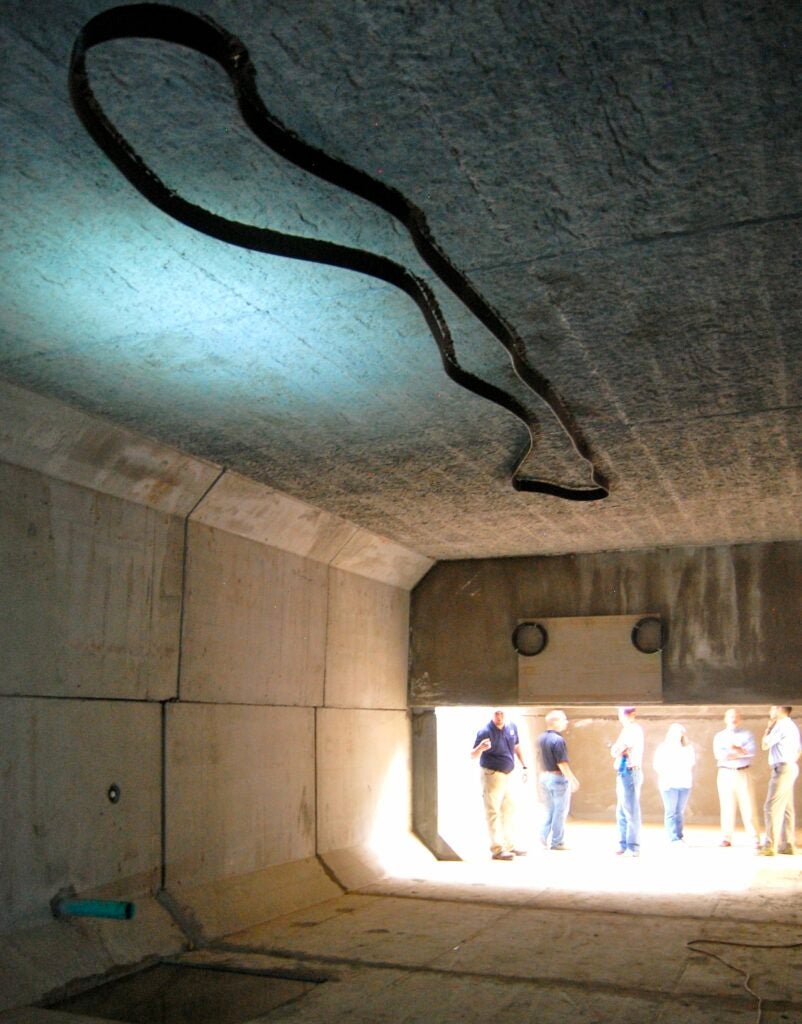 Inside the Artificial Bat Cave

The bats can hang from the curly fan belt or other ceiling attachments, including a net and a smaller metal spiral. Or they can grab directly onto the poured concrete ceiling, which was texturized specially for the cave. The metal pipe and pool of water are designed to bring rainwater into the cave, both to maintain humidity levels and to provide drinking water for the bats. 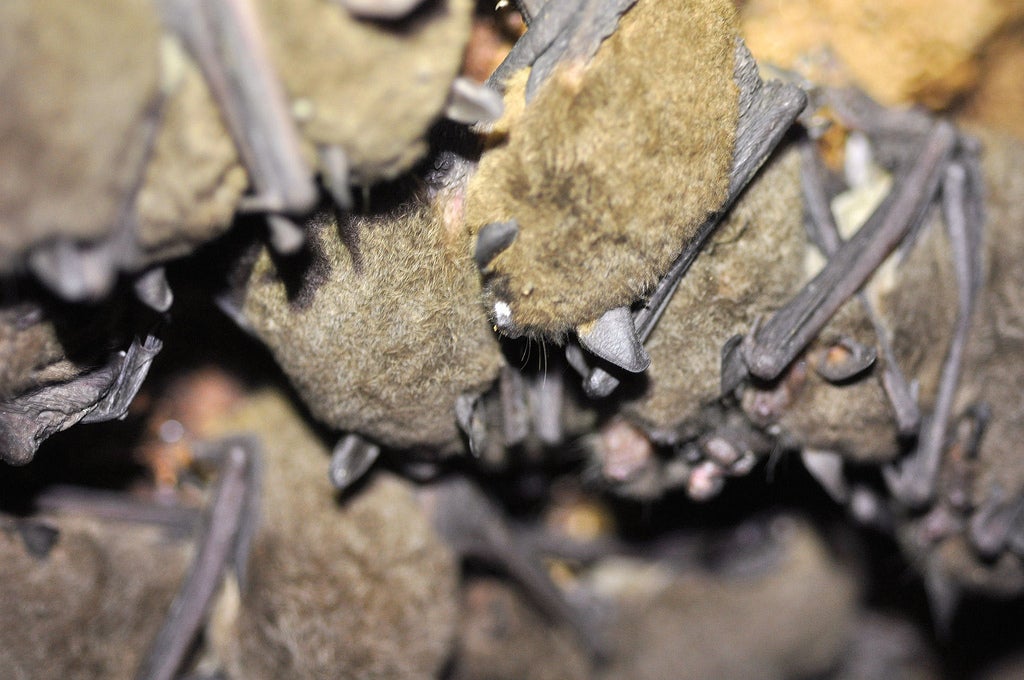 These gray bats live in Montgomery County, Tenn., where white-nose syndrome was first detected this spring. You can see some of the fungus on the face of the foreground bat. Gray bats in Montgomery County have a brand-new artificial cave where they can hibernate for the winter, if they choose to use it. 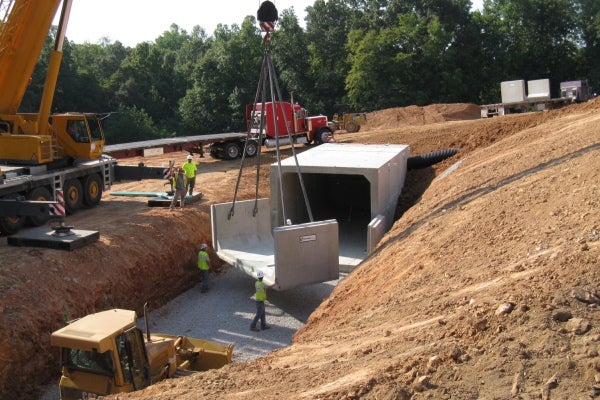 The man-made cave is composed of 28 pre-cast concrete sections, which fit together using a tongue-and-groove system. They’re modified versions of a standard concrete culvert used under roads and highways. Most of them weigh between 17 and 21 tons apiece. 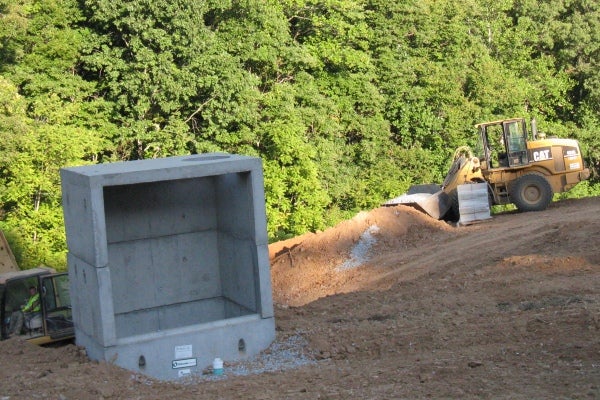 The bats will fly into the artificial cave through this entryway, which The Nature Conservancy will block with a gate so no people can fall through. In this photo, the main body of the cave is now buried under more than four feet of dirt. 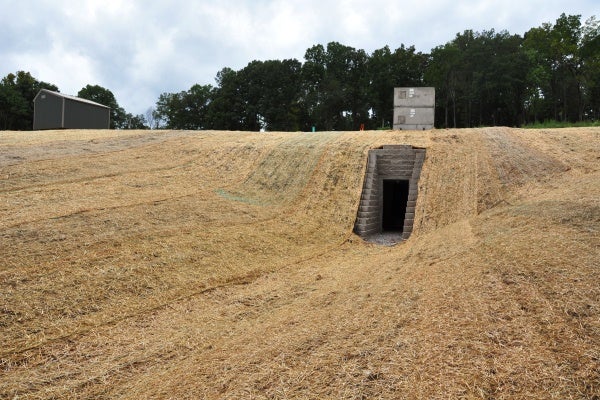 Humans will enter through this normal-sized doorway at the base of the cave. Interruptions will be uncommon, because the bat cave will also be equipped with surveillance equipment to keep an eye on the animals. The outbuilding on the left can be used as a base station for Nature Conservancy staff — there’s not a lot of other infrastructure in the area. The manmade bat cave is designed to welcome several species of bats, including the gray bat, Indiana bat and Eastern small-footed bat. The cave includes several features that might appeal to each species, like hanging nets, rigid frameworks and even a crevice wall made out of DUROCK cement board. 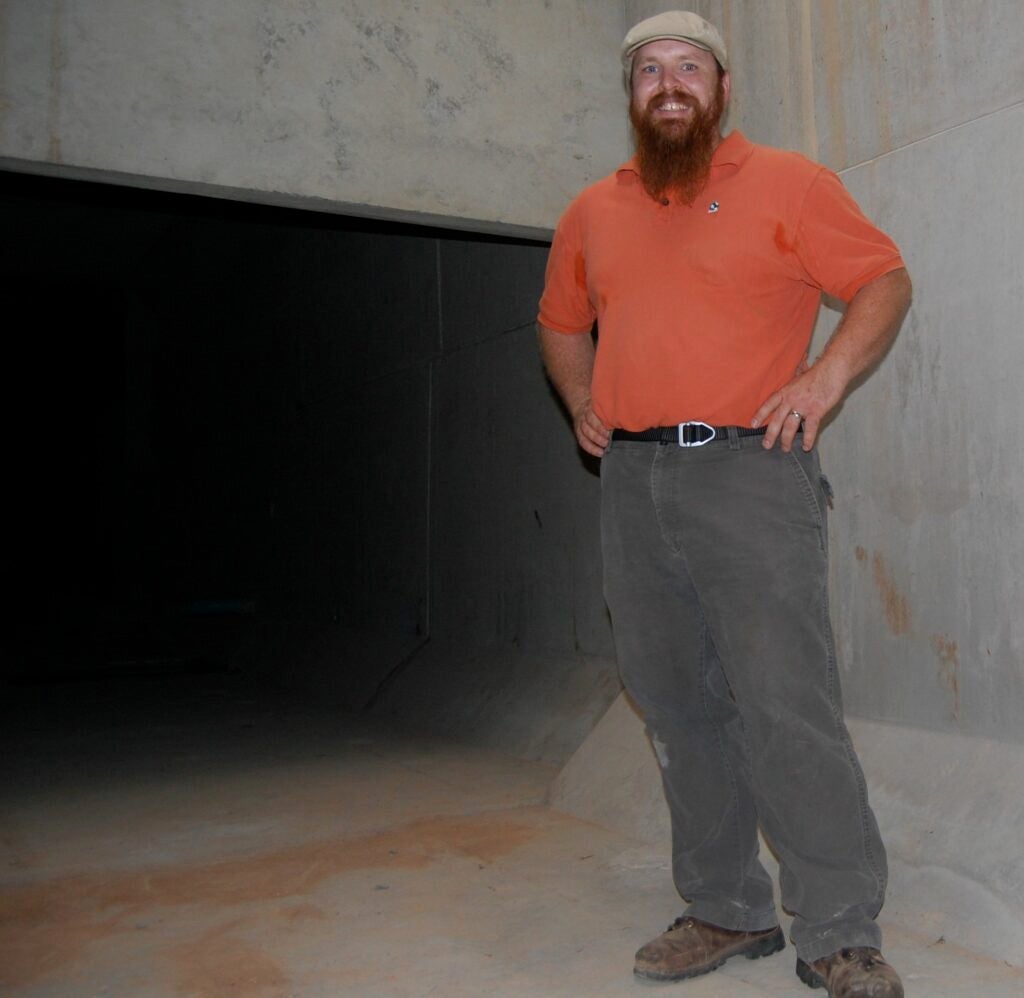 Sick of seeing bats perish by the millions, Cory Holliday, director of the Cave & Karst Program for the Conservancy in Tennessee, designed and coordinated the construction of the first-ever artificial bat cave. The goal: To give wild bats a home that can be disinfected, protecting them from the fungus that causes deadly white-nose syndrome. Biologists hope gray bats from Montgomery County, Tenn., will use it this winter, and then it can be disinfected when they leave in the spring. 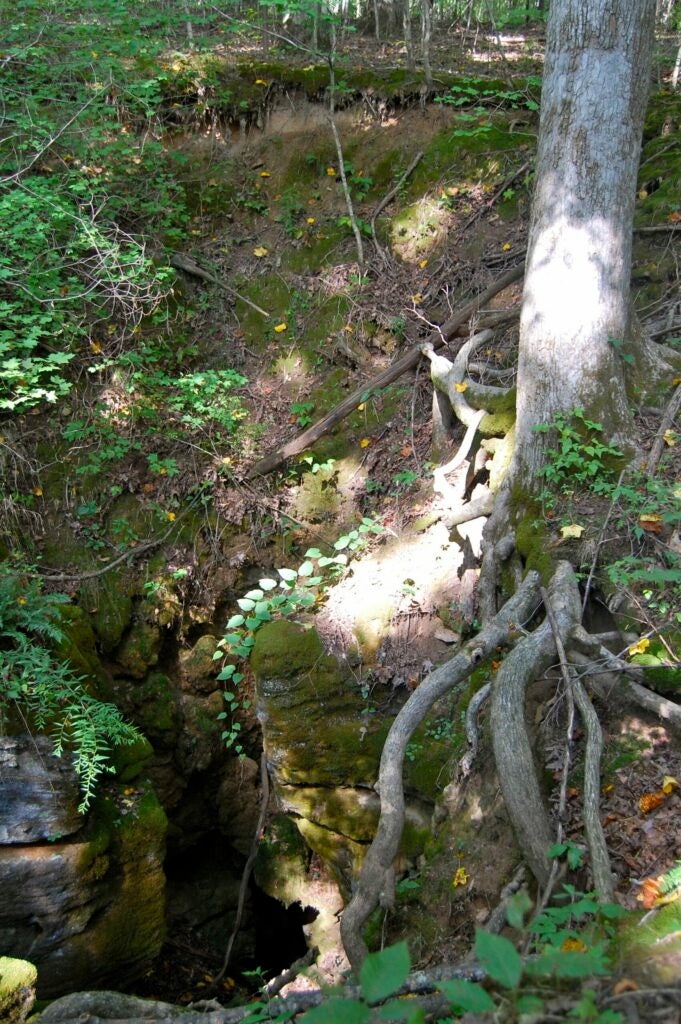 An Entrance to Bellamy Cave

The sun pokes through the trees above Bellamy Cave, the natural cave where some 160,000 Tennessee bats usually spend the winter. This cave entrance is about 100 yards from a newly built artificial cave, which The Nature Conservancy hopes the bats will choose to use instead. 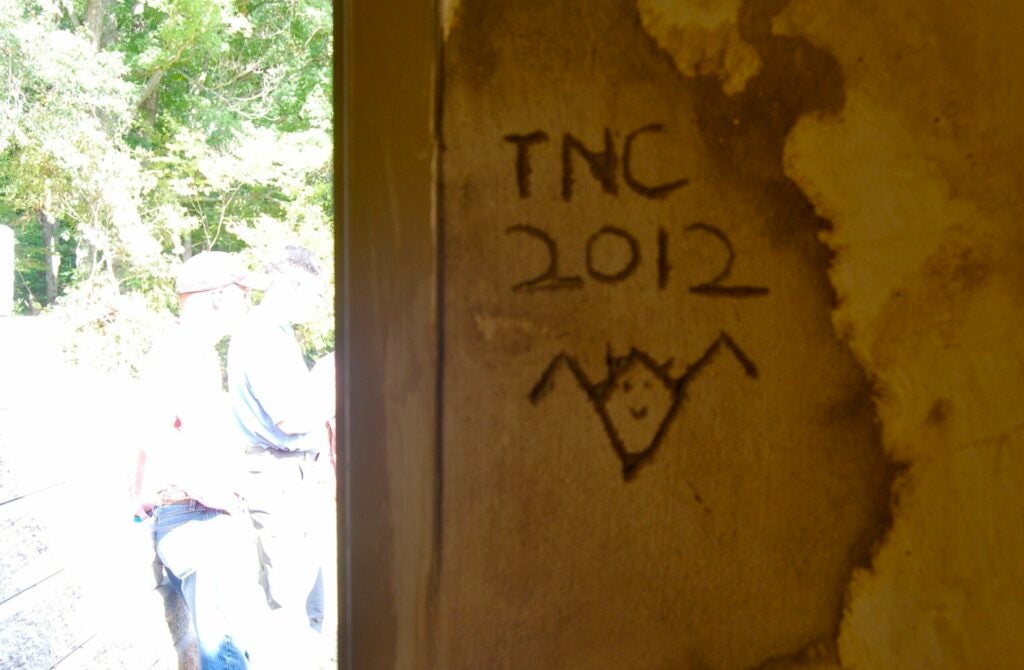 The bats will move to their fall staging area within the next few weeks, depending on when temperatures start cooling down sufficiently. After that, biologists at The Nature Conservancy, the U.S. Fish & Wildlife Service, and the Tennessee Wildlife Resources Agency hope they will move in to the artificial cave.
bats
bats dying
batsci
conservation
feature