This Mud Could Revolutionize How Scientists Study The Past

New radiocarbon measurements from the silty bottom of a Japanese lake could help scientists pinpoint when Neanderthals died out. 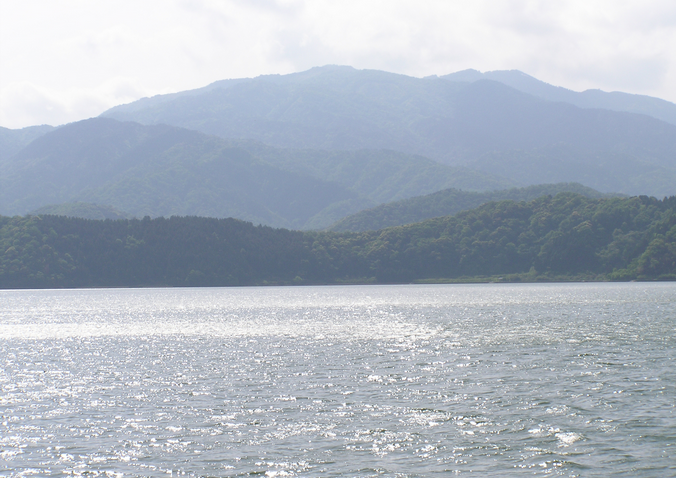 New radiocarbon measurements from the silty bottom of a Japanese lake could be one of the most helpful tools for natural historians in decades. With this new record, archaeologists could nail down the precise timing of the demise of the Neanderthal. Or anthropologists could determine exactly when humans spread into Europe. Or climate scientists could better understand the last ice age, and what climatological conditions led to the glaciers’ retreat.

Core samples from largely unperturbed Lake Suigetsu, which scientists have been trying to obtain and study for almost 20 years, refine one of our best tools for understanding the past 50,000 years on Earth, in other words. “It it is no exaggeration to say that without that ability, fields like anthropology, archaeology and paleoclimatology would not exist as we know them,” said Jesse Smith, senior editor at the journal Science, which publishes the paper today.

Carbon dating uses the predictable, unchanging decay of a radioactive isotope of carbon known as carbon-14. It forms in the atmosphere in the presence of cosmic rays, which break down nitrogen into this unstable form of carbon. But as far as life is concerned, it’s just more carbon, meaning it’s fixed in plants. Animals that eat these plants also have C-14 in their bodies.

C-14’s half-life is 5,730 years, give or take about 40 years. Using this known rate of decay, scientists can calculate how old a relic is by determining how much C-14 it still contains, relative to its stable cousin C-12. This can be used to determine the age of organic material in archaeological sites, for instance–human remains, wooden artifacts, and so on. This technique was invented in 1949, suggested by Enrico Fermi, and has been used since.

The problem is that cosmic rays and the atmosphere itself are variable, unpredictable things. This means the amount of C-14 in the atmosphere changes, so the amount incorporated into plants and animals changes, too. Calibrating this carbon record requires matching up radiocarbon data with items of a known age–like tree rings, for instance, or lakebed sediments.

“One must know how the C-14 content of the atmosphere changed in the past in order to know where to start the stop watch for any particular sample,” Smith told reporters. This new lakebed core does just that.

Once you have something older than 12,000 years ago, it’s much harder to accurately pinpoint an age, explained Christopher Bronk Ramsey, lead author of the paper and a professor at the University of Oxford. This is largely because of major climate changes after the end of the last ice age. Scientists have some samples, from marine records and cave deposits that can be cross-checked with uranium measurements, but these don’t give atmospheric C-14 levels.

The new paper, which involves teams from several countries, studies core samples that contain yearly layers of algae. These diatoms cover the lakebed every year, and are followed by a sediment layer. It’s so clear you can see it with your naked eye, as seen below. 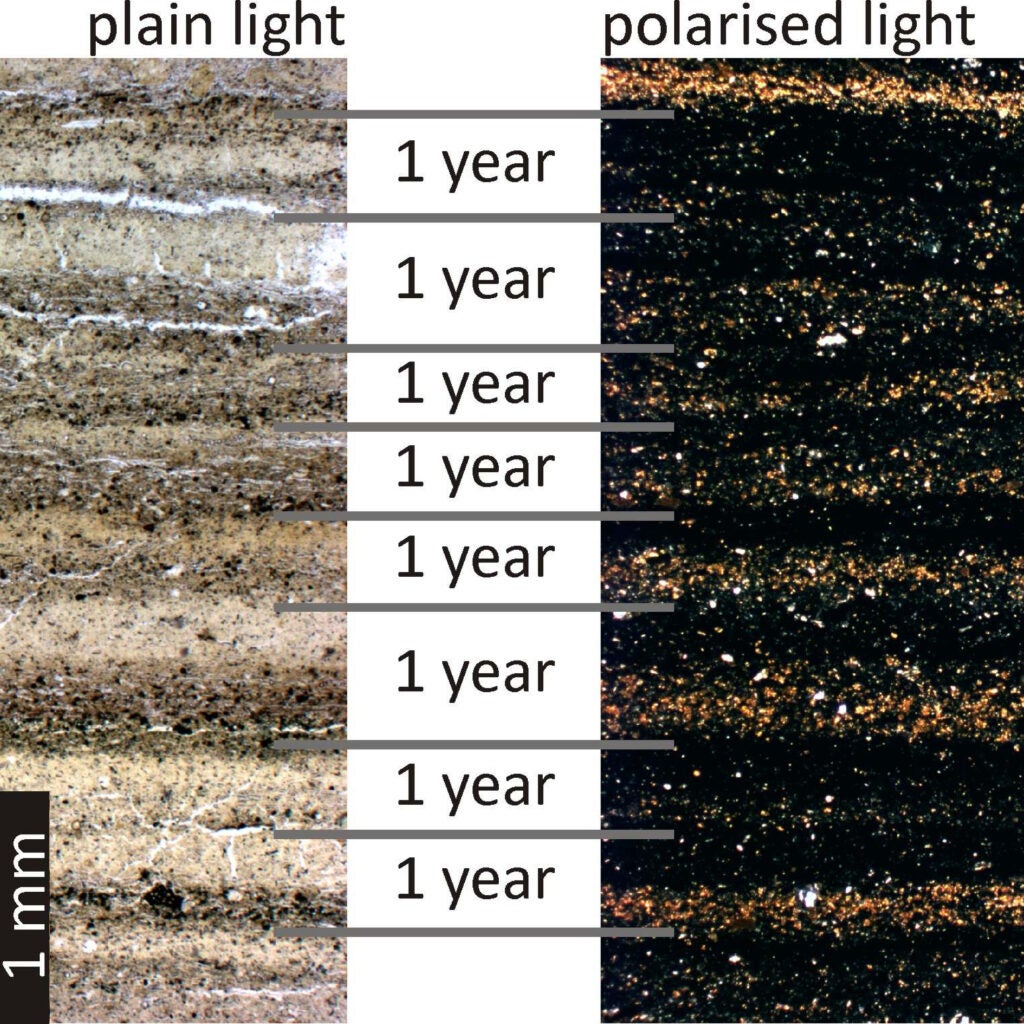 This image shows varved sediments from Lake Suigetsu in visible light and under polarized light.

The lake is very still and its bottom is anoxic, so it’s very stable, the scientists say. It was never covered by glaciers, so even during the last ice age, leaves fell from trees around the lake. Fossil remnants of these leaves helped the team refine its carbon dates.

Takeshi Nakagawa, a professor at the University of Newcastle, was first involved in sediment sampling at this lake in 1993, he told reporters in a news conference. The first scientific paper from that core sample published in 1998. But the 1993 core was not a continuous sample, with gaps between different layers–so just like other calibration techniques, it was unclear exactly how the years matched up, making it an incomplete record. After obtaining funding from the UK’s Natural Environmental Research Council, Nakagawa took another core in 2006. It’s fully continuous, with overlapping layers, dating to 52,800 years ago.

In some cases, the layers were very thin and impossible to discern with the naked eye, so Nakagawa sought help from scientists in Germany and the UK. Teams of researchers took studied the samples with a particle accelerator based at Oxford and with a hand-made core scanner made by Swedish physicists. Using X-ray fluorescence, the team identified the spectral signature of chemicals in the core and how their makeup changed, explained Henry Lamb, a professor at the University of Wales in Aberystwyth, UK. The team was able to identify seasonal layers deposited by snowmelt, volcanic ash, and more. It took several months to scan more than 40 meters of core, Lamb said.

“I always tell my students that chronology is crucial in studies of climate change, archeology, and human evolution. Now, I can tell them that Suigetsu provides a chronology that we can count on,” Lamb said.

The record won’t upend archaeology–there won’t be millenial-scale revisions in the measured ages of objects. But a swing of several hundred years, which is significant, is certainly possible. Those changes can be important when studying human responses to climate, for instance, Bronk Ramsey said. “A more accurate calibrated time-scale will allow us to answer questions in archaeology, which previously we have not had the resolution to address.” 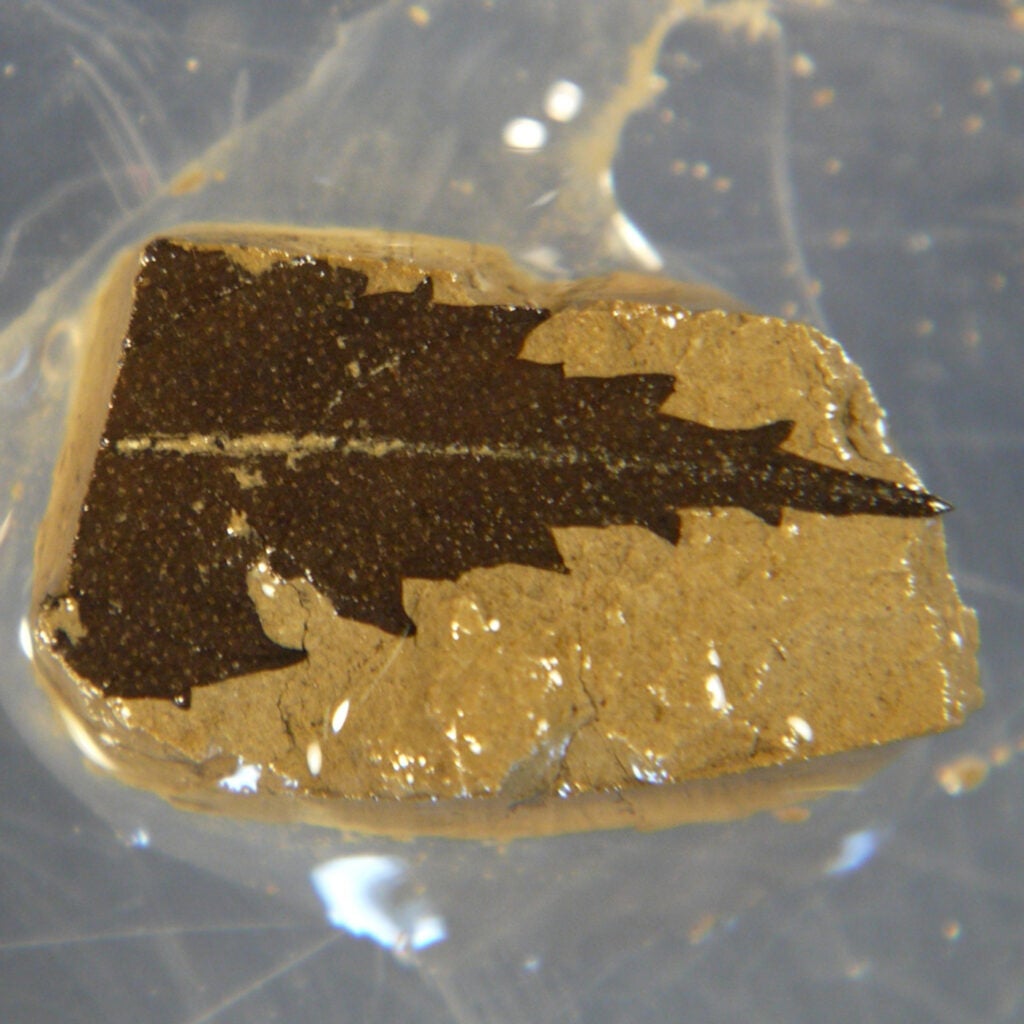