FYI: Why Don’t Spiders Get Trapped In Their Own Webs?

Find out how these arachnids avoid getting trapped in their goo. 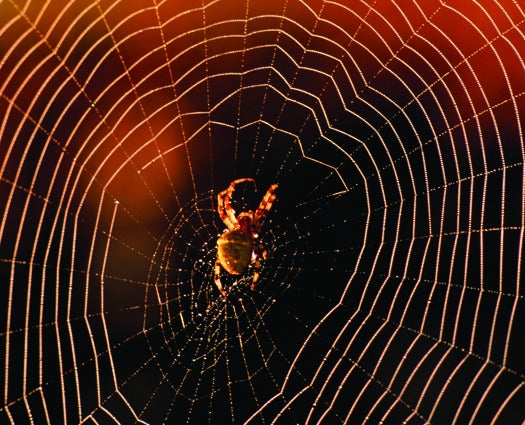 Orb-weavers, arachnids that capture their prey using sticky webs, make up more than one fourth of all known spiders. These species spin their creations with spiral crossbeams dotted with drops of viscous goo. (The webs’ radial and framing threads are left clean.) When an insect brushes against these drops—each thread can carry several dozen per millimeter—it gets stuck, and the spider rushes over to inject it with venom or cocoon it in silk. The question, of course, is how does the predator escape its own glue traps?

Naturalists have only recently worked out the mechanics of the sticky web—and of avoiding it. “It’s surprising how little attention the topic has gotten despite how many people wonder about it,” says Brent Opell, a biologist at Virginia Tech who has researched spiders’ capture threads. Opell has shown that when a bug tries to pull away from a web, the droplets divide the force across a length of stretchy silk, so that no single point bears all the strain.

As for how spiders avoid their goo, scientists have plenty of ideas but not much data. One hypothesis, that spiders simply skip over the sticky threads, has been more or less discredited. In fact, orb-weavers sweep their hind legs across the goo hundreds or thousands of times as they make their webs. They also brush their bodies against the drops while they’re subduing prey. Another, more promising theory originated in 1905, when a French naturalist named Jean-Henry Fabre noted that the orb-weavers frequently ran their legs across their mouthparts. He wondered if they might be spitting up or otherwise secreting some sort of lubricant that protected them from their own web. Fabre tried washing spider legs with solvent, and reported that many became ensnared.

There may be more to the story, though. Another study published in 2012, this one done in Costa Rica, came to a similar conclusion about the oily coating. But the Costa Rican study also used video analysis, which showed other adaptations: A spider moves its hind legs across the capture threads at an angle that minimizes the glue’s effects, and tiny barbs on the bristles of its feet, or tarsi, help keep its legs from sliding into the goo. The idea that a spider might have multiple ways of avoiding snaring itself doesn’t surprise Opell. “If it’s an important thing to the spider,” he says, “there probably are several mechanisms that have evolved to contribute to the nonsticking ability.”

All of the above applies to orb-weavers, but their webs aren’t the only ones that stick their prey. A related family of spiders, called Deinopidea, makes use of an older method that predates the evolution of viscous goo. Dry cribellar threads catch on the stout bristles of an insect’s body, or adhere to it through capillary and van der Waals forces. What tricks do Deinopidea use to escape their cribellar yarns? The arachnologists haven’t yet worked that one out.