Kevin Keel would rather not infect bats on purpose. A veterinary pathologist at the University of California at Davis, he... 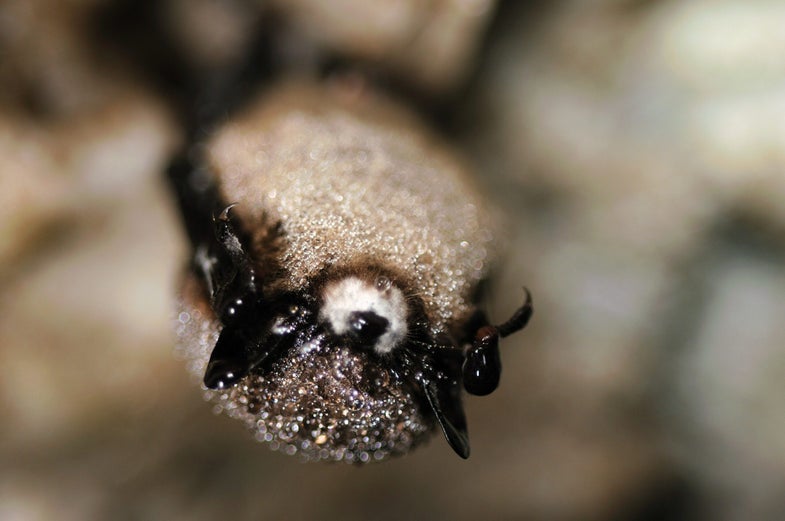 Kevin Keel would rather not infect bats on purpose. A veterinary pathologist at the University of California at Davis, he studies white nose syndrome, a disease that is decimating bat populations across the United States. To do it, he needs to take tissue samples from healthy bats and study them later in the lab.

But how to collect the samples? Biologists can catch a bat and snip a slice of wing with a hole-puncher of sorts — but this is really tricky. Keel and colleague Barbara Shock, a wildlife disease ecologist at UC Davis, needed a simpler, specialized device that any biologist can use.

They turned to the university’s 3-D printer lab for help, and its manager suggested they ask the students. The problem turned into a student engineering competition held in mid-January. During a frantic 30-hour Make-a-thon, student teams came up with designs, sketched them in computer-assisted design software, and built them on 3-D printers.

“To understand this disease, we really need to be able to do experimental infections,” Keel says. “But we’ve already lost so many bats, and it’s so difficult to work with bats in artificial hibernacula, that we were looking for another approach that would be powerful.”

White nose is caused by a fungus, Pseudogymnoascus destructans, which colonizes the bodies and wings of cave-hibernating bats. Scientists aren’t totally sure how it kills them, but one theory is that bats wake up from hibernation to groom themselves too frequently, depleting their fat reserves and starving to death. Keel studies how white nose spreads by inoculating bat skin samples, called tissue explants, with the fungus.

This means cutting a piece of wing tissue in the field, and simultaneously stretching it across some sort of adhesive membrane. This is tough work — imagine holding a tiny, squirming, bitey bat and trying to clip part of its wing without damaging it.

“A bat wing is so thin and so elastic that it’s like wet toilet paper, and you can never get it to go back into its native shape,” Keel says. “You can imagine how frustrating it is to hold the bat on the cutting board, pull the bat wing, and if you are sampling for diagnostic purposes, trying to see where the fungus is with ultraviolet light. We wanted something that would make it ultra simple that we could use with one hand, allowing someone to restrain a bat with one hand and snip a biopsy with the other hand.”

Keel and Shock pitched their problem to 60 student members of UC Davis’ Biomedical Engineering Society on Jan. 16, and the students worked around the clock to draw designs and build CAD files for each part.

“They came up with some designs that would not have occurred to us,” Shock says.

This tissue sampler can punch a small hole in a bat’s wing so scientists can preserve the tissue to study white nose syndrome.

One successful prototype, seen above, has a special medical-grade adhesive ringing one side of the part labeled “b.” When this device used to punch a small hole in a bat wing, the wing membrane is stretched over the adhesive, securing it in place. Its design allows one side of the bat tissue to be immersed in cell medium, keeping the tissue alive, while the other side is exposed to the air — and the white nose fungus.

By Sunday evening, Jan. 18, the Makeathon yielded four projects that could actually work in the field. Keel and Shock are now working with the university’s TEAM Design, Prototyping, and Fabrication Facilities to refine and then build lots of them.

Bats live in dark, inaccessible caves or high in trees; they fly; and they communicate in ultrasonic chirps that we can’t hear, so they can be among the toughest animals to study in the field. Biologists often turn to unique tools for tracking them. But the competition made it unique, Shock and Keel say. What’s more, the engineers learned about something they otherwise wouldn’t know, Shock says.

“All of these 60 participants had to learn about white nose syndrome and why bats are important,” she says.