The hundreds of millions of bats in the U.S. are in serious trouble, threatened by such hazards as wind turbines... 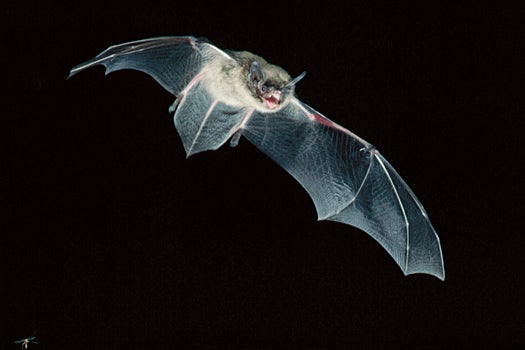 The hundreds of millions of bats in the U.S. are in serious trouble, threatened by such hazards as wind turbines and a fungal infection called white-nose syndrome, all while facing the uncertainty of a changing climate. Most bats hide in caves during the day and live in the air at night, making them notoriously difficult to study. But if scientists are going to help them, they need to be able to track them.

To that end, biologists Winifred Frick of the University of California at Santa Cruz and Tom Kunz of Boston University have teamed up with some unexpected allies: weather researchers Phillip Chilson, an atmospheric physicist at the University of Oklahoma, and radar scientist Ken Howard of the U.S. National Severe Storms Laboratory.

The U.S. National Weather Service’s 156 Nexrad Doppler radar stations gather a tremendous amount of data. They scan the country in five- to 10-minute intervals, 24 hours a day, from 0.5 degrees above the horizon to 19.5 degrees. And in doing so, they detect much more than weather. Anything in the air bounces a signal back—insects, birds, wind turbines, low-flying planes, forest-fire smoke, falling meteors, debris from NASA disasters, and bats. Radar scientists call the signal from flying animals bioclutter. “From a meteorological standpoint, it’s noise,” Howard says. “It contaminates all our algorithms. It misleads people. We have examples that look like severe storms, but it’s actually bats coming out of the ground.” 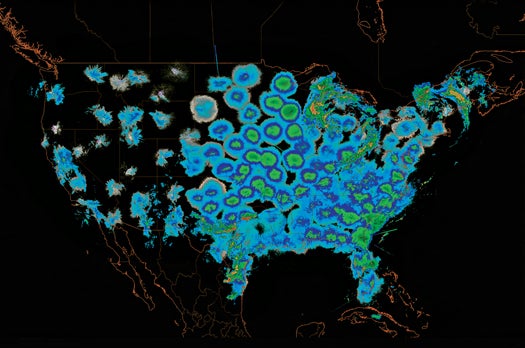 Radar picks up both weather patterns and flying animals. The National Oceanic and Atmospheric Administration uses special algorithms to filter the raw signal, pictured here, to produce a weather map (pictured below).

The weather-radar images shown on TV broadcasts have mostly been scrubbed of such clutter. But unscrubbed maps are far more complex. Clear, cloudless nights are filled with flocks of animals on the wing, which appear on radar maps as a thick cloud of fuzzy green dots, similar to raindrops. If a cloud of bat-size objects appears at dusk at the location of a known bat cave, they’re probably bats, which means that the Weather Service’s 20-year-old, 1.2-petabyte raw radar archive is also an archive of two decades of bats in flight.

The Nexrad archive has already generated several new observations and even a new field of science: aeroecology, a term Kunz coined last year. Frick has noticed that in a dry year (when insects are less abundant), Brazilian free-tailed bats in a certain Texas cave emerged from their daytime slumber earlier in the evening to get a head start on mealtime. During a wet year, they slept in. Using the archive, Frick also spotted insects pooled along a storm front, where winds shepherded them together. On several nights, the bats gathered to feed on the wind-formed buffet line—clear evidence that weather influences foraging activities. She says she wants to study the entire two-decade archive, including looking at whether the free-tailed bats are starting to spend the winter in Texas rather than heading farther south, which would be an indication that a warming climate is changing migration patterns.

Eventually, the scientists aim to use the data to count population numbers at each cave. The algorithms that determine the identity of objects in the sky are not yet nuanced enough for a census. But they could be improved, helping both meteorologists and biologists better determine, for example, what’s a cloud, what’s a bat-cloud and what’s an insect-cloud. (Bioclutter still sometimes contaminates weather-only maps, looking like a storm.) 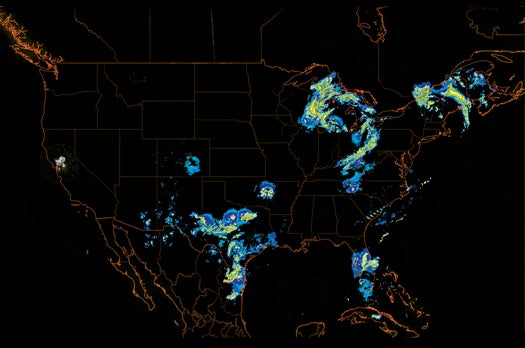 The colors represent radar reflectivity, ranging from grey (lowest reflectivity) to blue, green, yellow, and red (highest reflectivity). In the raw image (the bubbly map of America above) produced on September 30th at 11 p.m. ET, the blue and green are most likely migrating birds, flying at night when winds are calmer.

Radar scientists are working to make the archive more useful for researchers. One of their goals is to produce animal-only maps and animal counts, much as they produce weather maps and rainfall counts today. In order to accurately screen for various life-forms, though, the scientists need to know more about how individual animals appear on radar. Last summer, Chilson and Frick scanned live bat swarms in west Texas with a mobile radar device (designed for tornado chasing) while also using infrared cameras to identify individuals. Chilson even put a dead bat in an anechoic chamber to precisely map its radar signature.

Howard says that the animal-tracking project could also help biologists studying insects and birds, particularly those observing nocturnal airborne behavior. The aerosphere is a habitat just like the land or the ocean, “but we never stop to look at it,” he says. “Most of these things happen at night. There’s a whole richness of life that’s going on that is not visible, unless you are a biologist with night-vision glasses—or if you are using radars.”