This Robat is designed to work like a real fruit-bat wing. 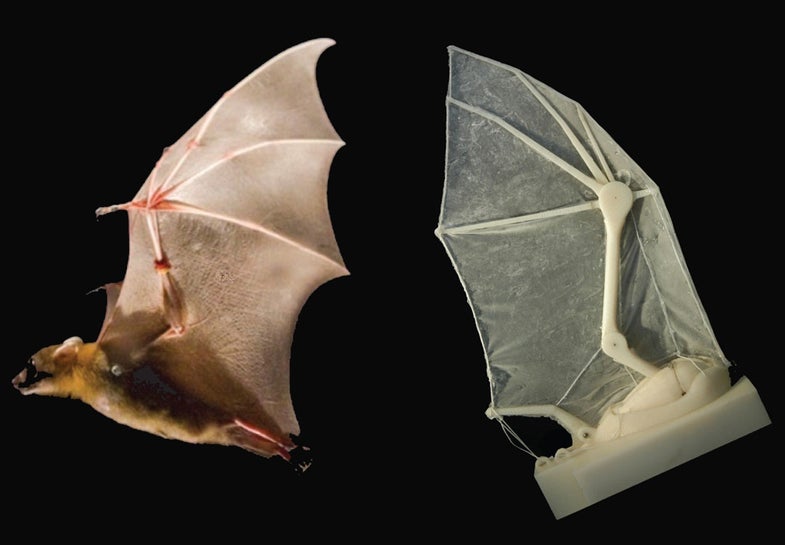 A new 3-D printed robotic bat wing can emulate the flapping motion of a real bat, helping biologists simulate how the mammals fly and helping aerodynamics researchers study new flapping-wing aircraft. In the process of building and modifying the robotic wing, researchers at Brown University stumbled upon some structural fixes that provide insight into how bat bodies evolved for flight.

Bat wings are incredibly complex mechanisms, producing lift and thrust to help the flying mammals quickly chase their insect prey, fly long distances, and nimbly move through dense clouds of their compatriots. A bat’s wings span almost its entire body, supported by two arm bones and five finger-like digits covered in an elastic skin that can stretch up to 400 percent of its original size. Small aircraft based on bat designs could be efficient little flapping drones, but researchers would need to understand how bats work.

Studying real animals poses a bit of a challenge, however, explains Joseph Bahlman, a graduate student at Brown who led the project. “We can’t ask a bat to flap at a frequency of eight hertz then raise it to nine hertz so we can see what difference that makes,” Bahlman said. “They don’t really cooperate that way.”

Instead, Bahlman and his team printed plastic bat bones and stretched a silicone elastomer “wing membrane” over it. The bones are connected to cables, which serve as tendons, and these are activated by built-in servo motors. The team could put the wing in a wind tunnel and test a bunch of parameters, like wing flap-frequency, related energy requirements, lift and drag, and so on. It’s based on the wing of a lesser dog-faced fruit bat.

Flapping wing aircraft (and animals) generate lift by flapping down and by folding their wings back a bit; think of hunching your shoulders forward and back, or rotating your wrist. Some of the downstroke lift is wiped out by the drag created on the upstroke. To avoid this, birds and bats fold their wings in a bit on the upstroke. By using the robot, Bahlman and colleagues found that wing folding increases net lift by almost 50 percent–a useful insight into how flapping-wing flight works.

But this research might be even more interesting for its insights into bat biology. During wing tests, a groove joint on the wing’s “elbow” kept breaking, for instance. Bahlman eventually wrapped it in some steel cable to keep it intact, just like ligaments holding joints together in real animals. The team also realized that real bats have a large set of muscles right at the elbow joint, and this may have evolved to prevent the elbow from bending to a breaking point, according to the researchers.

Then in further tests, the membrane started ripping on its leading edge. Bahlman reinforced that, too, using elastic threads. According to a Brown news release, the fix ended up resembling the tendons and musculature that reinforce real bat wings.

This underscores the importance of those wing structures–and could help explain why bats are so badly harmed by a debilitating fungus called Geomyces destructans, which coats their faces and wings. The fungus causes a deadly disease known as white-nose syndrome, and one of its characteristic symptoms is a badly infected and damaged wing membrane, preventing the bats from flying.

The robotic bat wing will help answer further questions about bat flight especially after the team starts tweaking its composition, according to Brown. The researchers want to change some materials to study bone flexibility, weight and other characteristics. Meanwhile, their initial research appears in the journal Bioinspiration and Biomimetics.