Can Technology Help Biologists Save Bats from Extinction? 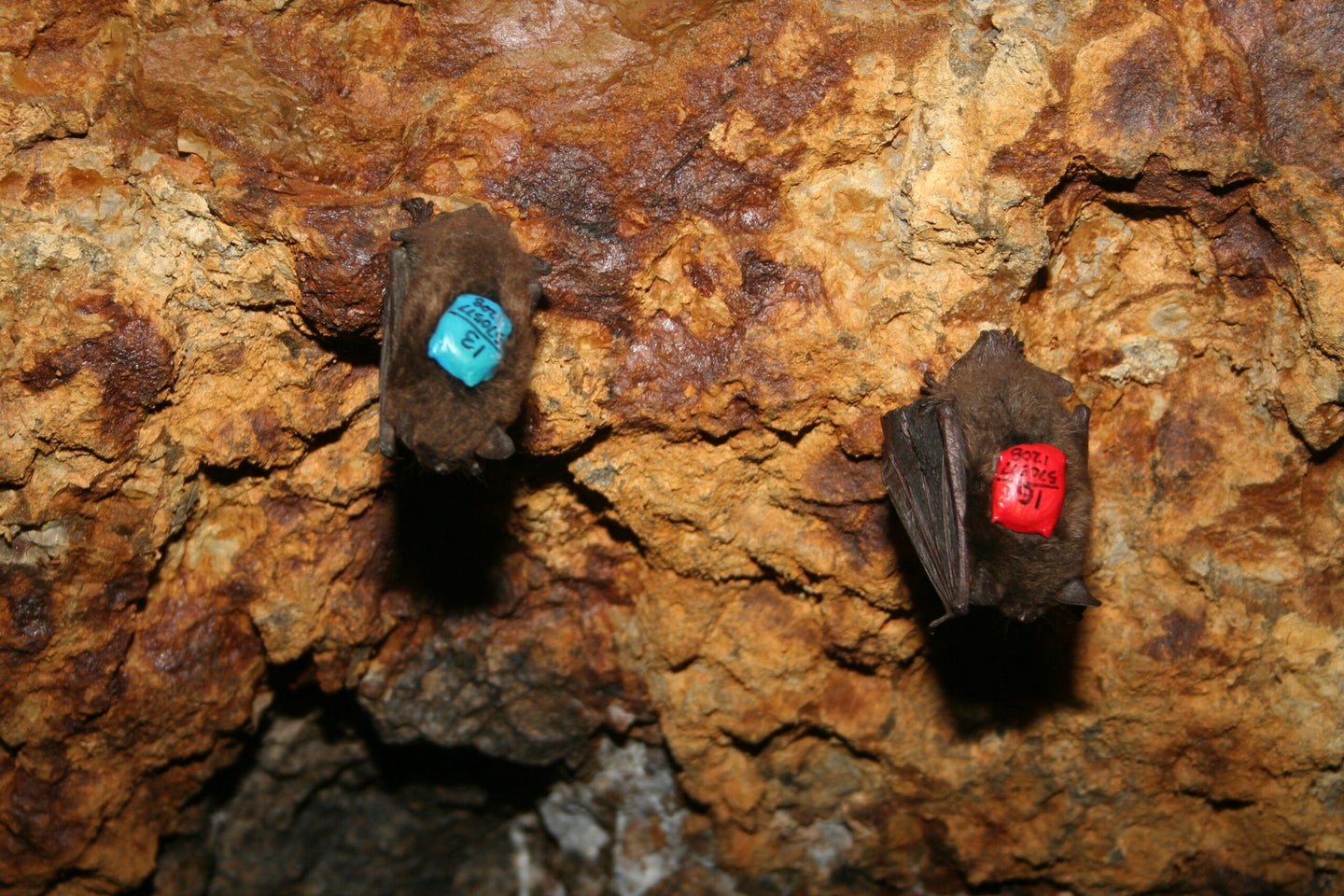 These little brown bats are outfitted with M&M-sized; data loggers that track their body temperature. Bats with white-nose syndrome wake up frequently when they should be in torpor; this burns fat reserves and leads to their death. US Fish & Wildlife Service
SHARE

DENVER — Gerald Carter walked over to Dave Dalton’s table and paused, listening to a discussion about infrared light. He set down his backpack full of video and audio equipment and smiled. “I love this lamp. I left it running for three months,” he said, eyeing a round black object. He has three hard drives’ worth of vampire bat videos, all illuminated by the special infrared lamp Dalton sells. It’s a fondness only bat researchers could appreciate.

Any wildlife biologist will tell you it’s difficult to study wild, free-ranging animals in their natural habitats. You have to find them first, then catch them, examine them, attach radio transmitters or tags to them, and let them go. Now try that when your subject is silent, nocturnal and all but invisible.

Advanced technology is intrinsic in the study of bats — for the most part, we can neither see nor hear them, so biologists use a suite of special microphones, cameras and telemetry equipment to uncover their secrets.

“You need special equipment to get into their world. To get even the most basic information, you need really advanced technology,” said Carter, a PhD candidate at the University of Maryland.

Carter studies cooperation and social behavior among vampire bats, and he uses equipment that costs nearly as much as tuition. One of his ultrasonic microphones is worth $10,000 — he’s borrowing it so he didn’t have to buy it.

“If I was studying birds, I could just go to Radio Shack and get a digital recorder,” he said.

Vendors like Dalton offer the latest infrared lights and cameras; high-speed video; ultrasonic microphones; and special processing software that allows researchers to better see and hear bats. At the North American Society for Bat Research annual conference this week, biologists are buying technology like tiny radio transmitters — the smallest one on the market weighs just 0.006 ounces — and learning how to shoot and edit video to improve their research and communicate with the public. Carter has even used high-speed cameras to watch vampire bats running on a treadmill. Software called Sonobat can capture bat calls, slow them down and turn them into digital images, which biologists can use to tell different species apart.

Even the Army is involved, at least tangentially — technology initially developed to track missiles is now being used to track bats. The Army Corps of Engineers worked with the US Fish & Wildlife Service to set up thermal infrared cameras that can track the heat signatures of individual bats, said Tony Elliott, a staff scientist with the Missouri Department of Conservation. The cameras can help researchers monitor bats flying in and out of caves.

All this advanced tech will help bat biologists in the battle against white-nose syndrome, which is killing hundreds of thousands of bats throughout North America.

Passive acoustic monitoring equipment can inform biologists when bats behave abnormally, such as using echolocation in the middle of the day or during the height of winter. Michael Schirmacher, a biologist with Bat Conservation International, said most bat researchers have special Anabat II acoustic detectors sitting in storage over the winter, but they can easily be used to monitor white-nose in the cold months. Last winter, he placed detectors in infected caves throughout Pennsylvania and was able to verify abnormal activity without ever setting foot in a hibernacula. That’s important because many biologists believe humans can carry white-nose fungus on their clothing or equipment, unwittingly infecting bat caves.

Researchers also use lasers to monitor cave emergences and infrared cameras to watch bats grooming themselves — until, as grad student Sarah Brownlee found out, a wayward rabbit chews through the cables.

There are some low-tech solutions, too. Thomas Kunz, a biologist at Boston University, advocates using scrap wood to build roost modules, basically little nests where lactating bats can hang out. Bats cluster together to keep warm, and when they’re dying by the hundreds of thousands, maternity colonies will have less ambient heat to help the few survivors. Artificial roost crevices can help, Kunz said.

Bat biologists are frequently asked how they can help save bats from white-nose, and Kunz said bat houses and roost modules are one easy answer. Then again, electrical engineers with a penchant for designing cameras could pitch in, too.