Looking for bats in all the wrong places

Biologists are on a quest to find where bats hibernate when there are no caves nearby. 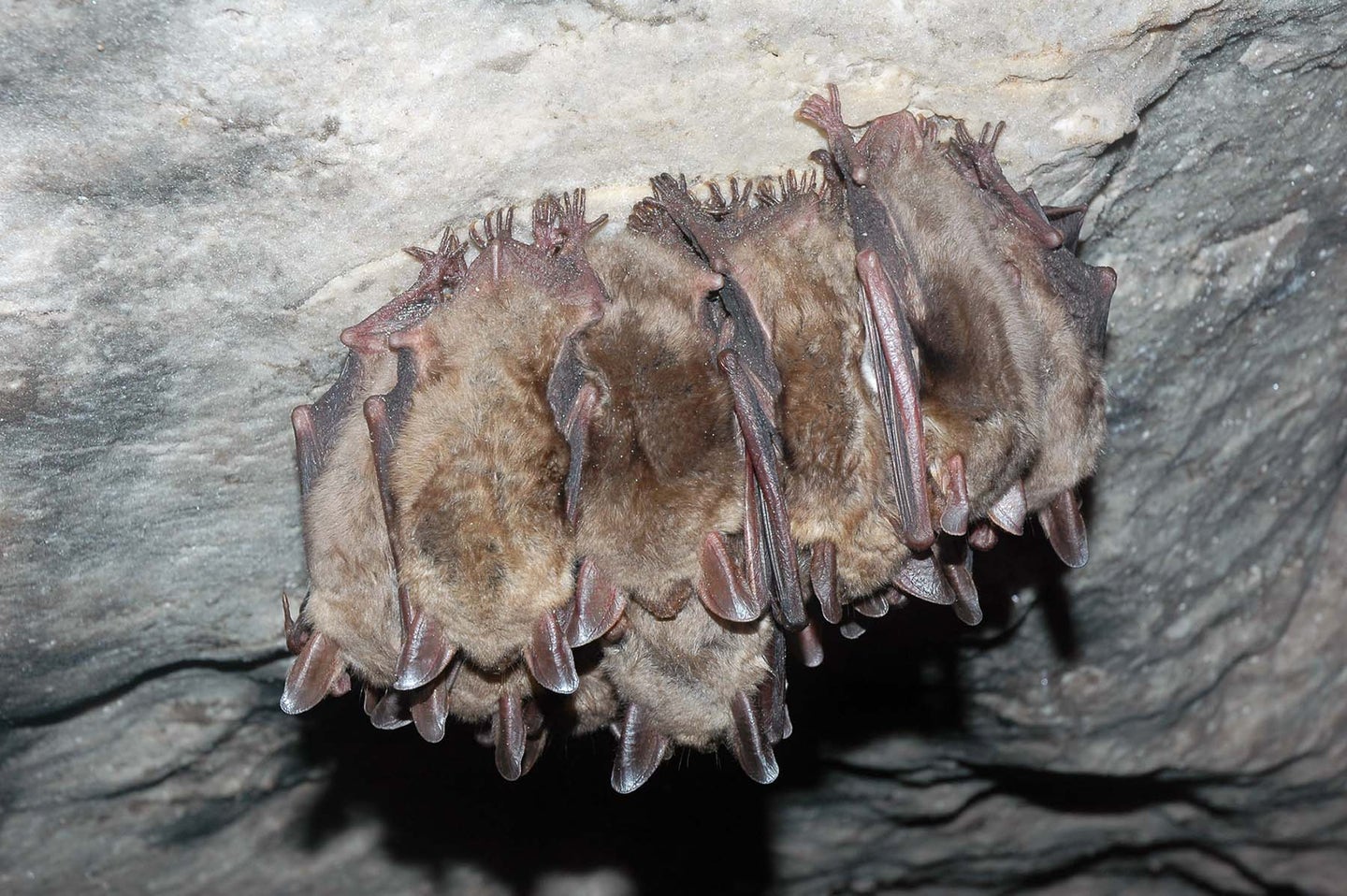 We may think that bats only reside in caves like this one, but that's not correct. Depositphotos
SHARE

There are at least three things that those of us with a passing knowledge of bats know to be true. Bats are nocturnal. They have weak eyesight and thus navigate their dark world using echolocation. And they live in caves. But the truth is more complex. Some bats do fly during the day. Some bats, like fruit bats, have perfectly fine vision. And not all bats live in caves.

Here in the United States, many bats on the East coast do live in typical underground caverns, but there are plenty of places where bats have alternative housing options. “As you get further west they don’t have many traditional caves and mines. Like in Nebraska they don’t have very many,” says Catherine Hibbard, a public affairs specialist with the U.S. Fish and Wildlife Service. But while those states lack caves, they do have bats.

“They have some mines in Washington State,” adds Hibbard, “but the bats, especially little brown bats and Yuma bats don’t seem to be using them. We really don’t know where they might be hibernating.”

Which raises the question: where are these bats hiding out?

The question has taken on new urgency since the emergence of white-nose syndrome, a fungal infection that has wiped out more than 6 million bats in the United States a result of the introduction of the fungus, Pseudogymnoascus destructans, in the early 2000s.

The bats that Hibbard mentioned are species that are particularly susceptible to the disease and whose populations have been decimated by its introduction. A decade ago the little brown bat was the most common bat in the country, numbering in the millions. But 2015 research by the United States Geological Services says that in the Eastern United States, where the disease has run rampant, bat populations could decrease to less than 100,000 animals. Knowing more about where bats are and how they use their environment might be key to tracking the disease’s spread and sustaining their populations.

“Last year was the first year that they confirmed white-nose syndrome in Rhode Island. It wasn’t that we didn’t think white-nose syndrome was there,” says Hibbard. “But Rhode Island doesn’t have caves or mines, and it took a while for them to track down where these bats might be.” It turns out that those bats were hanging out in culverts.

For their long winter naps, bats need a warm, moist, dark, and quiet place to hibernate. Often, that’s a cave, but other places, like culverts, offer a suitably bat-cozy environment to snuggle in for a few months.

Researchers are now working to find out these other bat hangouts. The hope is that by finding where bats are located, the biologists may find places that are refuge from Pseudogymnoascus destructans, the fungus that causes white-nose syndrome. At the same time, according to Hibbard, we don’t know that much about bats, and this could provide crucial information into bat behavior.

“We’ve been doing acoustic monitoring in the fall around the areas where we’ve been detecting white nose syndrome, to try and pinpoint these habitats where bats might have higher activities, so around talus slopes and cliffs which might suggest that they are using these features in the winter either to roost or foraging areas,” says Abigail Tobin, white-nose syndrome coordinator for the Washington Department of Fish and Wildlife.

If you look at the map of where white-nose syndrome has spread, Washington State stands out as anomaly. Before 2016 the farthest west the disease had spread was in Oklahoma. But that year, for reasons nobody yet understand, it suddenly jumped to Washington. Like on the east coast of the United States, it wasn’t until the emergence of the disease that researchers began to heavily study their bat populations. What we do know is that there are noticeable differences in bat behaviors. The biggest is the fact that while in the eastern part of the US bats can hibernate in groups reaching thousands, in the West the bats that are susceptible to white-nose, such as the Myotis bat, tend to roost in populations of one or two and generally not in caves.

“They’re dispersed across the landscape and are using a variety of habitat to survive,” says Tobin.

Biologists like Tobin are using acoustic monitoring to get a sense of where the bats are. But to understand specific use—is this location used for hibernating, or just roosting—more detailed research is required. Some of this research, like tagging bats, hasn’t yet been done—in part because it’s really hard, and often involves heading into landscapes that are far more friendly to animals that fly than animals that walk. One of the few places where some of that work has been done is in Maine.

“We suspected as biologists that bats stayed in other environments besides caves,” says Bruce Connery a biologist in Maine’s Acadia National Park. “But because that’s really hard to find we had never been able to check that out.”

Because mid-coastal Maine, where Acadia is located, doesn’t have very many caves, the thought for a long time was that the bats did a kind of long distance commute. In spring, went the reasoning, they would travel 200, 300, 400 miles to Maine from caves in New York, Vermont or Western Massachusetts and then conduct a return trip in the fall as temperatures dipped. But around 2010, as bat research ramped up because of white-nose syndrome, Connery and his team of researchers realized that they were still finding bats late into October and that the bats would show up really early in the spring. This would have meant that the bats were traveling those large distances on nights when the temperatures in interior New England were way below zero—and the insects’ the bats depend upon for food would have been in short supply. This didn’t make sense, so Connery and his colleagues started looking closer to home for places the bats could be hibernating.

Acoustic monitoring—that is setting up audio recorders designed to listen out for bat calls—helped lead them to a geological formation known as talus slopes.

“New England was covered with glaciers 10,000 or so years ago,” says Connery. “As they left they put different pressures on the land and those rocks crumbled off the side and they fell into these heaps off the side at the toe or at the base of the slopes.”

Those slopes aren’t solid rock, however. While the faces contain openings that are relatively small by human standards, they can lead to gaps large enough to fit everything from a single bat to dozens of bats. By tracking the bats to these slopes, they were able to set up nets to track the bats and affix transmitters on them to see where the bats were traveling. Technological advances helped as well. Before 2010, the batteries needed to power the trackers were too heavy to affix onto a bat. But by 2010 they had shrunk enough in size to make this kind of tracking feasible.

These days, Connery and his colleague strongly believe that talus slopes don’t just serve as roost sites for bats in the summer, but because they’re often warm and have an internal moisture – not unlike caves – bats use them through the winter. The tracking data showed that some bats do stick around through the Maine winters.

“Bats play an important role in our ecological services,” says Tobin. “They are great for pest control they eat tons of mosquitoes and moths that damage agriculture, there are several seeds that are pollinators that help to disperse seeds. Without them you’ll lose that key role in our environment. We’ll probably start seeing cascading effects from that if we lose a key part of your bat population.”