A new study is the first to identify a molecular basis for cat coat patterns. Could cat stripes be an immune defense mechanism? 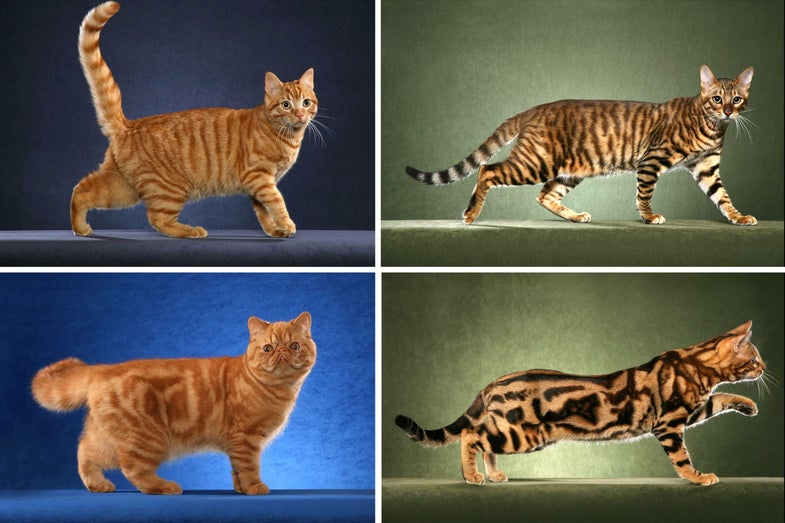 Anyone who’s ever seen a cat knows how distinct he or she looks compared to every other cat–stripes and whorls cover their coats in seemingly endless variation. It turns out that one gene is responsible for regulating these patterns, and it’s true for all of the domestic cat’s larger cousins. Different mutations on a shared gene produce the blotchy patterns of pet tabbies as well as the stripes on a rare type of wild cheetahs. What’s more, one geneticist thinks there could be an immunological reason for all these unique designs.

Cat coat genetics are complex and confusing, in part because phenotypes–the way cats look–are defined differently among various registries and associations. Stephen J. O’Brien, a scientist in the Laboratory of Genomic Diversity at Maryland’s Frederick National Laboratory for Cancer Research, said researchers wanted to pinpoint the genetic basis for this wide array of cat patterns.

“The same phenomena are seen in the rest of the cat family, too. There are 37 species in felidae — from clouded leopards, black panthers, cheetahs and so forth. There’s a little bit of an evolutionary dance where these different forms are coming out,” O’Brien said. “Nobody is really sure why there is so much variation.”

Previous research suggested there were three main determinants for the color of a cat — whether it’s solid-colored black or tawny, striped/tabby, or spotted, which is very rare in American cats. If a cat is not solid-colored, then it’s spotted or striped. The genetic sequence that codes for this is called the Tabby locus, or the Tabby gene.

Scientists led by Christopher B. Kaelin at the HudsonAlpha Institute for Biotechnology in Alabama re-sequenced this genetic region and found striped and “blotched” tabby cats carried three genes in the same region, two of which didn’t cause any interesting substitutions. But a mutation in a third, called Taqpep for Transmembrane Aminopeptidase Q, causes the blotched patterns. That can be seen in the bottom two cats in the image above.

“This gene in housecats was clearly responsible for this characteristic, which had three separate independent mutations in the history of cats,” said O’Brien, a coauthor.

The team wanted to compare this marbling in wild cats. There’s a cheetah phenotype called the king cheetah, in which the animal has bold stripes along its back, rather than just spots. They obtained blood samples from a king cheetah named Kgosi, who lives in a cheetah preserve in northern California. Turns out he also had a mutation on the Taqpep gene. Originally, this cat was described as a distinct species, but today’s new cat paper, published in Science, shows it’s genetically not.

To get a further handle on the genetics, the team then studied fetal domestic cats and cheetahs growing in the womb. They found that one gene, called Edn3, controls the color in the patterns. By studying the same gene in mice, the team was able to come up with a model for how Edn3 and Taqpep cause the colors and markings of cats, and why they remain the same even as the cat grows. 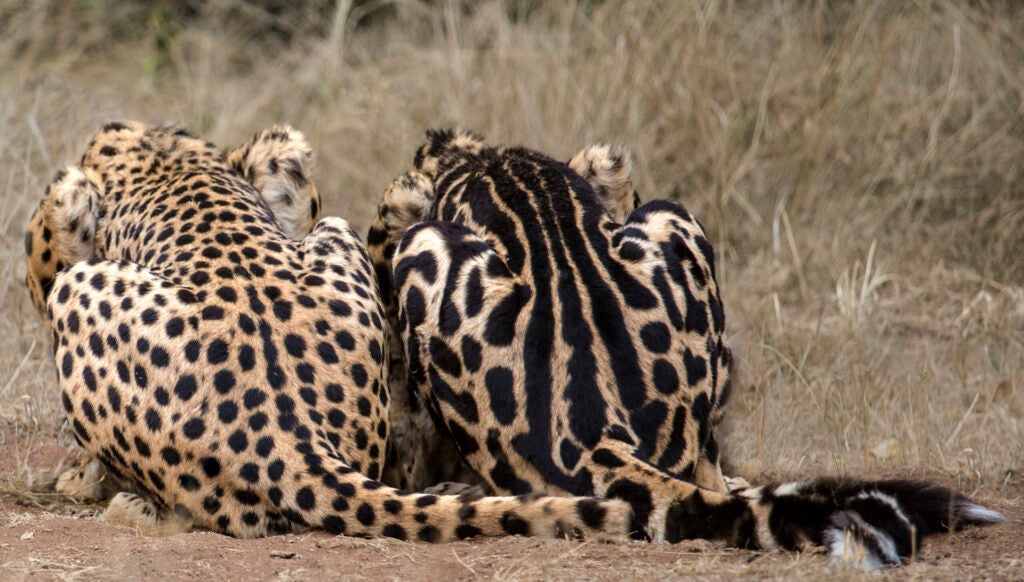 O’Brien — who lives on a Maryland farm with several outdoor cats of various colors and patterns — at first wanted to call the gene tabulin, after tabby cats, but was unsuccessful. Now that’s just the name for the protein that the gene codes for. “The human genomics people didn’t want to name a human gene after a cat,” he said with a laugh.

There’s clearly some evolutionary reason for all this variation, but no one is sure what it is. A common explanation is camouflage, in which mottled patterns make a cat more difficult to see in the bush or in twilight. O’Brien has another theory, which he admits is provocative: It’s about viruses. Both Edn3 and Taqpep are membrane-spanning proteins, which interact with the outside portion of cells, he explained.

“[Such proteins] are well-known to be involved in immune defenses, and to be co-opted by viruses. There is always this pressure of viruses finding a new receptor, and there’s a mutation that the animal survives,” he said. He believes coat pattern proteins are a target for viruses, and cats are different colors and patterns because the proteins have evolved mutations to resist the invaders, with no other effects on the cat’s health or characteristics.

While O’Brien admits there’s no evidence for this, at least not yet, there are well-known connections between immune response and surface proteins, some of which are involved in color. Immune-deficient rodents, developed for testing in laboratories, are albino white, for instance. And the rare mutation in the CCR5 gene in humans — coding for a protein that, while not involved in color, is present on the surface of immune cells — confers immunity to HIV.

“There are functions associated with these things that we are just beginning to appreciate and understand better,” he said. “This will probably stimulate more research into the function of this gene in humans and other model systems.”