This Weird Hairy Thing Is A Freaking Bat Tongue 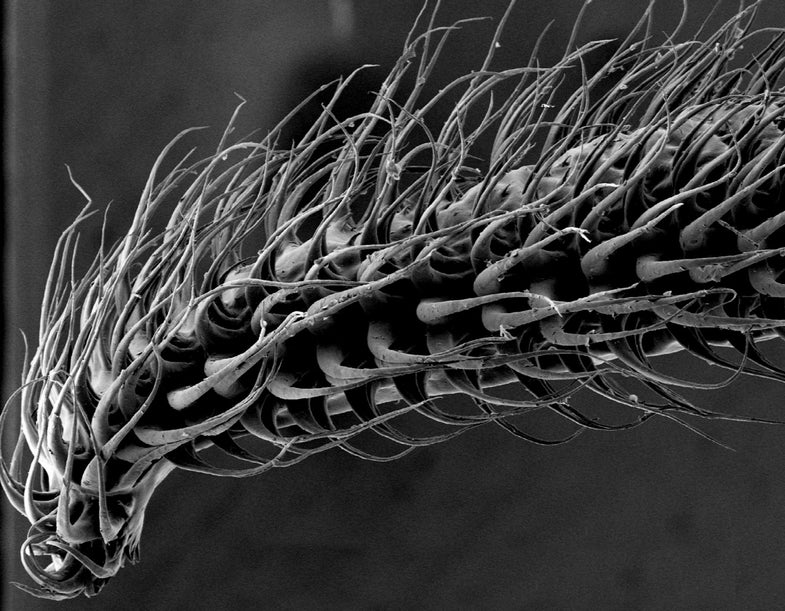 Nectar-feeding bats have the highest metabolism among mammals, burning half their body fat every day, and therefore they must eat pretty much all the time. To sip their food efficiently, the bats have evolved special tongue-hairs that help them grab as much sweet nectar as they can with every lick. This finding, made possible with high-speed video, could lead to potential new designs for medical equipment.

The bat tongues work like a mammal penis, engorging with blood to become stiff.The bat in this case is Glossophaga soricina, or Pallas’s long-tongued bat, which lives in Central and South America. Biologists already knew it had a hairy tongue, but they thought these fibers were passive, just hanging out when the tongue is lolling around, explained Cally J. Harper, the lead researcher on this new study. She found they’re active, engorging with blood and changing their orientation to serve as little nectar-scoops.

“When we get cold, the hair on our arms sticks straight up–it’s sort of like that, except that hair erection is powered by muscle, and in this case it’s powered by blood vessels,” Harper told Popular Science.

Another analogy: The bat tongues work like a mammal penis, engorging with blood to become stiff. Only much, much faster.

Harper used a Phantom v10 high-speed camera to film the bats feeding at 500 frames per second. Slowed down, the video clearly shows the tongue fibers–they’re called papillae–stretching out perpendicular to the rest of the muscle. It happens whether or not the bats actually stick their tongues in the nectar, which shows it’s not a passive response to surface tension. This is a hydraulic process–the same process that makes a starfish leg move, and the same process that makes the penis erect in mammals.

“When we were first thinking about this, we were like, ‘there’s no way that these tongues could be hydraulic.’ Most structures that are hydraulic tend to be slow,” Harper said. “The limbs in starfish, the penis erection mechanism in mammals, is really slow, but this happened in 40 milliseconds.”

She and her colleagues at Brown University tested it on tongues excised from dead bats. They injected the tongues with saline as a proxy for blood, and found as the tongue flicks out, it grows thinner as it elongates. As those muscles contract and increase the tongue’s length, they squeeze blood (or saline) into the tips of the papillae: A hydraulic process. “It’s a two-for-one,” Harper explains.

Plenty of other mammals use powerful tongues to force liquid into their mouths–high-speed video of dogs and cats show their curled tongues forcing columns of liquid upward. But when our pets drink, lots of liquid falls back into the bowl (or onto the floor). Not so for the bats, Harper said. Nectar droplets are caught among the papillae, and much more liquid gets into the bats’ mouths. This is an evolutionary advantage that can explain why such a complex structure would exist in only a couple species. The Pallas bat’s closest relative also has the tongue hairs, she added.

Hummingbirds also have unique tongue structures to help them obtain the maximum amount of nectar possible. It stands to reason that nectar-feeding bats, which have a similar metabolism, would also have some tongue tricks.

Harper–who defends her graduate thesis tomorrow–was interested in how mammal tongues work during feeding, and decided to focus on the bats because of the unusual hairs. But now she wants to turn the finding into potential new medical devices. A device that can hydraulically change its shape and structure could be useful for a whole host of surgical procedures, she explained.

“Technology modeled after these tongues could be especially useful for keeping blood vessels open during surgery, or keeping portions of the intestine open,” she said. “In some of the technology that’s out there for angioplasty and gastric surgery, the tools are made of these metal, rigid materials. I think it would be really great if we could make a medical tool that was soft and flexible, and could possibly minimize damage to blood vessels.”

Harper’s paper is published this week in the Proceedings of the National Academy of Sciences.