Furry Racism At The Pound: Why Is It Harder For Black Cats To Find Homes?

A Berkeley study searches for the link between cat color and cat personality. 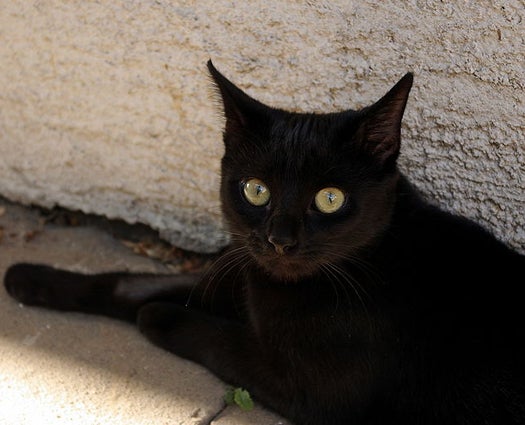 Are people spooked by black cats? Darker felines sure seem to get the short end of the stick when it comes to adoption. Black cats stay in shelters longer and are more likely to be euthanized than their lighter-colored counterparts. Researchers at University of California at Berkeley conducted a study to find a link between cat color and people’s perception of cat personality. The findings were surprising: People do judge feline personalities by color, but don’t assess black cats negatively relative to other cats.

Orange and bi-colored cats are rated high in friendliness, tri-colored cats are high in intolerance, and white cats are high in aloofness. However, the researchers concluded that black cats weren’t rated significantly higher or lower in any trait than other color groups. Effectively, people perceive these cats as having neutral personalities compared to other cats. So why the cold shoulder at the adoption agency?

Mikel Delgado, lead author of the study, said in a press release, “Previous research supports the existence of ‘black cat syndrome,’ where black and brown cats are less likely to be adopted than cats of other colors.” She adds, “We were interested in whether people’s perceptions of the interaction between personality and coat color might play a part.”

Superstitions might be one reason why black cats are the last to get adopted, especially around Halloween. But Berkeley researchers offer another conclusion: While 94.7 percent of respondents said that personality influences their decision to adopt, personality may be less important to potential adopters than they think. After all, assessing the personality of a cat based on its coat isn’t a foolproof method.

If it all comes down to looks, it may be that subconsciously, people don’t think black cats are pretty enough. The researchers suggest that if shelters had empirically reviewed tools to assess cat personality, they could better match them to potential owners and try to work around their color biases.