But it's a real, brand-new monkey, discovered in the Democratic Republic of the Congo--only the second new monkey species in the past 28 years. Meet the lesula. 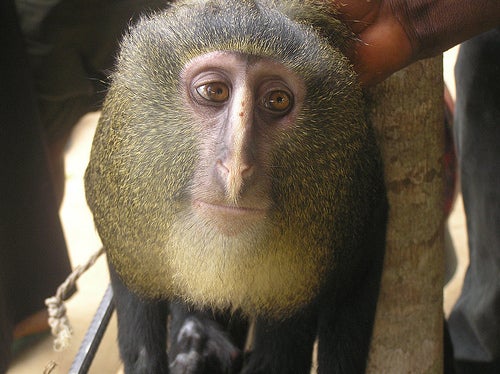 In the Democratic Republic of the Congo, scientists have discovered a new species of monkey–only the second in the last 28 years. The lesula is a guenon, a genus of Old World monkeys found exclusively in sub-Saharan Africa, and while guenons are very common, the lesula was unknown to western science until a chance meeting in 2007. A scientific team happened to find one being kept as a pet, leashed to a fencepost. It was known quite well to hunters of the area, but the scientists had never seen it before, hence discovery. Like the other guenons, it’s a smallish, forest-dwelling monkey, preyed upon by leopards, humans, and chimpanzees.

What we love about this story, aside from a new monkey, is that there are still fairly large mammals (and terrifyingly large spiders) we’ve yet to document–who knows what else is out there? [via CNN]