Scientists Read Monkeys’ Minds, See What They’re Planning to Do Before They Do it

Neurologists working with monkeys at Washington University in St. Louis to decode brain activity have stumbled upon a rather surprising... 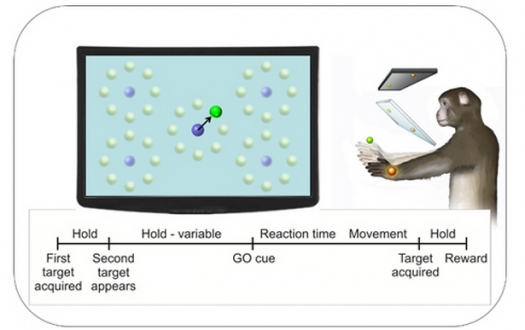 Neurologists working with monkeys at Washington University in St. Louis to decode brain activity have stumbled upon a rather surprising result. While working to demonstrate that multiple parameters can be seen in the firing rate of a single neuron (and that certain parameters are embedded in neurons only if they are needed to solve the immediate task), they also found that they could read their monkeys’ minds.

This isn’t exactly ESP, but it is really interesting. The researchers came to find out that by analyzing the activity of large populations of neurons, they could discover what actions the monkeys were planning before they made a single motor movement. By monitoring neural activity, the researchers could essentially see what the monkey was thinking about doing next.

This discovery occurred largely because the two monkeys involved in the experiment had already demonstrated very different cognitive styles. One is a bit hyperactive, eager to begin and complete each task even before being given the signal to begin. The other is more methodical, waiting for the entire breadth of the task to be revealed before making a motion.

The tasks involved were so-called “center-out tasks” in which a monkey or some other subject must place a hand at the center of a field (a tabletop or some surface) and then move it from this center location to another location placed in the area around the center. To plan this movement, the brain needs to know simply where its hand is located (at the center), where the target locations is (somewhere on the surface away from center), and the velocity vector the hand will follow (what path the hand will take to move from starting place to target). These can all be measured in the neural activity of the brain.

When the path between center and target locations is unimpeded, this is relatively straightforward in terms of neural activity. But when the the researchers introduced obstacles that would pop up between the center and the target like whack-a-moles, the neural activity of the two monkeys began to show interesting differences.

In other words, the two monkeys showed completely different strategies for reaching the target–strategies that the researchers could see unfolding in the neural activities of their brains beforehand. They could see what the monkeys were planning before they did it–which is pretty amazing from a neuroscience standpoint.