One cave’s losing battle against a deadly bat fungus

Ghosts of bats past. 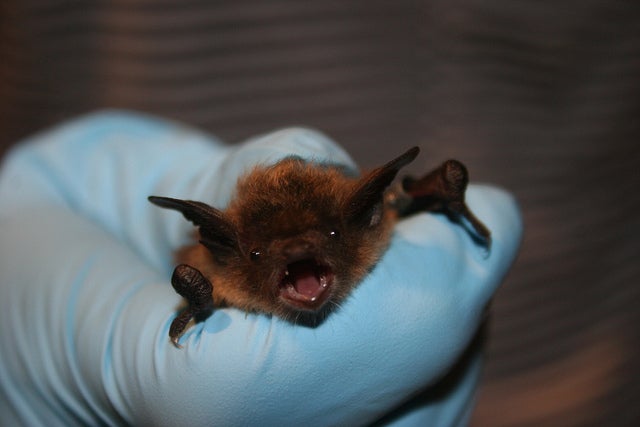 I’m somewhere around 40 stories down when it hits me just how much we’ve lost. I am inching through tight cavern rocks on my stomach, hitting my (thankfully helmeted) head each time I give into instinct and attempt to look up. The cave ceiling is very close to the cave floor. The spelunkers winnowing their bodies through these sinuous crevices are likely the only vertebrates in this cave system. But just a decade ago, it was home to thousands of bats.

They’re all gone now, apart from five long-eared bats that flit in occasionally. The other bats—mostly little brown bats—were wiped out by a fungus, Pseudogymnoascus destructans. We can’t see the fungus that causes white-nose syndrome lining the rocky walls, but we have it on good authority that wading through the Pennsylvanian cave’s muck has left us covered in the stuff.

I take a deep breath and wonder if Pseudogymnoascus destructans is inside me, innocuously mixing with the bacteria, viruses, bacteriophages and other fungi that form my lung’s microbiome. Unlike the bats, I can take it. The fungus doesn’t seem to affect humans. It’s around then that I realize this cavernous world has become liminal, a place of transition between the old world—where you could see bats darken the sky at sunset as they fled—and this new world, where some species of bats have been wiped out entirely.

As far as anyone can figure, it was cavers who brought Pseudogymnoascus destructans to the United States. They inadvertently introduced the pathogen to a cave in Eastern New York State sometime in the early 2000s, though the first documented case was in the winter of 2006.

White-nose syndrome is now in 31 states and five Canadian provinces, moving south and east and petering out towards the Midwest. This year, though, it popped up in the Texas panhandle, and for reasons nobody understands managed to leapfrog into Washington. It could be that bats living between the outbreaks aren’t getting sick, or it could be that nobody is finding them. Only time will tell.

Pseudogymnoascus destructans kills insidiously. Of the 47 bat species that call the United States home, more than half hibernate to survive the winter, when the insects that they depend on for food become scarce. Hibernation allows the bats to enter a deep slumber and live off of their fat stores. Many, including the little brown bat, huddle together in the warm areas of caves. But this pattern of behavior only hastens white-nose syndrome’s spread. The habitual huddling for warmth allows the pathogen to pass from bat to bat, and provides the perfect temperature for the fungus to grow. As Pseudogymnoascus destructans spreads across a bat’s body, it wakes up, either to clean the fungus off or because it’s having trouble staying warm. Every time a bat wakes during winter hibernation, however, its body stores dwindle, leading to dehydration, starvation, and usually death.

Nine American bat species are confirmed to have white-nose syndrome. For reasons that aren’t clear, some bats don’t get sick from the fungus. The bats that do get sick include the Big Brown bat, the Eastern Small-footed bat, the endangered Gray bat, the endangered Indiana bat, the threatened Northern Long-eared bat, the Yuma bat, the Southeastern bat, and the Tri-colored bat. But the decimation of the little brown bat seems especially heart wrenching.

There’s the fact that little brown bats are adorable. As their name suggests, they are little, with a maximum body height of around four inches and a peak weight of roughly half an ounce. They fit in the palm of your hand. And little brown bats are ubiquitous—or at least they used to be. Before white-nose syndrome, they were the most common bat in North America. Their deaths visibly loosen the bonds that keep our ecosystem together.

While bats in other parts of the world dabble with fruit and blood, bats in the United States are insectivorous—they eat bugs. There isn’t much data to back up a frequently stated claim that bats can eat 1,000 mosquitoes an hour, but they do seem to help keep the number of nuisance insects in check. Studies suggest that the mere presence of bats seems to cut down on the number of mosquitoes. At the same time, bats chow down on a number of agricultural pests like corn ear moths, and spotted cucumber beetles. And because bats flit from plant to plant as they collect insects, they also spread pollen, which means they pollinate our crops alongside bees and butterflies. As these bats die off, we lose the services they provide to the ecosystem; the ways they help farmers.

To humans, bats can seem like elusive creatures. Our eyes don’t see as well in the dark, making the nocturnal animal difficult to spot during the times they’re most active. The window in which we can most easily see bats is narrow—in the fading light of sunset when they depart their domiciles and in the dwindling darkness around sunrise as they return. So for many, the fact that white-nose syndrome has killed more than 6 million bats in the Northeast and Canada alone is all too easy to ignore.

The deaths weren’t the fault of those first cavers—not exactly. Nobody knew that a fungus powerful enough to wipe out a cave’s worth of bats was at play. And it took a while for people to catch on, with the fungi meanwhile leaping from commercial cave to commercial cave, carried by unwitting visitors. Even protected caves weren’t safe: once the disease started spreading, the bats brought the fungus in on their fur.

“The season of 2009-2010 is when we started getting ready for this,” says Lisa Hall, the director of case studies at Laurel Caverns Geological Park (where I’m currently mucking about in Hopwood, Pennsylvania). That year, when they’d had their highest bat count—some 2,500 bats of six different species—researchers at the Pennsylvania Game Commission told them that the disease had begun migrating out of New York State, and they should start to be concerned about white-nose syndrome.

“The owner David Kale, when we had our first talk and we realized this was coming, I will never forget the look he gave me,” says Hall. “Just kind of a look of hopelessness. Our bats were going to die.”

But they had to try. They stopped most of the tours into the deeper portions of the caves where the bats tended to congregate—the portions I crawled through and contemplated.

“That was a surprise to everybody, because Laurel Caverns have been open for a long, long time,” says Hall.

For the tours to the shallower parts of the caves, they placed a pad with a bleach solution for visitors to shuffle through, in effect disinfecting their shoes to emphasize the protection of the bats. They handed out pamphlets explaining how to properly sanitize caving equipment. The state Game Commission even erected nets over the mouth of the cave after the bats entered for hibernating season. Because white-nose syndrome rouses infected bats from sleep, they were afraid that sick bats from other caves might wake up and fly over.

But all of these efforts were like trying to patch a leaky raft with bubble gum; they’ll work, but only to a point. The most visited caves were the first ones to take ill.

“But the fact that Laurel Caverns didn’t get it first, the fact that it went to some natural caves south of us here and then worked its way up here, is some evidence that maybe what we did worked a little bit,” says Greg Turner, a mammalogist with the Pennsylvania Game Commission. It’s possible they successfully kept humans from tracking the pathogen in on their clothes, he says. “But it was inevitable that it was going to come via the bats.”

And white-nose syndrome did come. In 2009, they counted 2,500 bats; in 2011, they counted 25. In 2012, they counted five. If we had shimmied through the cavern in 2009, the year before white-nose made its way here, we would have seen bats throughout our expedition. But the only signs of life these days are humans, along with the fungi and bacteria that shimmer in the light of our headlamps. You can’t disinfect a cave, so Pseudogymnoascus destructans is here to stay.

The news isn’t all bleak. Increasingly, the bats that have survived infection seem to be adjusting their behaviors to put up a bit of a fight. Turner says that some of them appear to be picking hibernation locations that are in the cooler range of their comfort zone—the fungus doesn’t grow as well in colder temperatures.

There’s hope that the bats in places where the pathogen has taken hold might learn to adapt, but researchers are also working hard to curb its spread. It’s work that we will chronicle this week—the fourth annual Bat week—as we dive deep into the life of the world’s only flying mammal.