Daily Infographic: If Everyone Lived Like An American, How Many Earths Would We Need?

Hint: It's a good thing not everyone lives like an American. 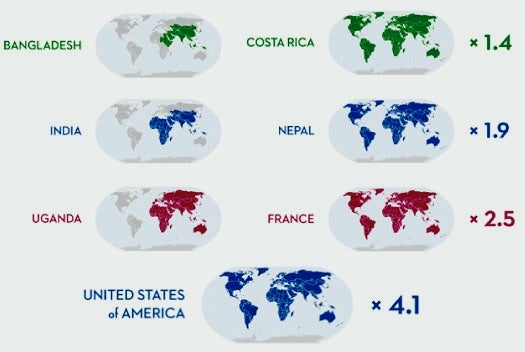 While those numbers do sound impressive, it can be hard to know what to make of them. OK, so we eat 10 billion animals and throw out 16 billion disposable diapers every year. So what?

Today’s infographic, by blogger and journalist Tim De Chant, gives the issue some meaningful context by asking, and then answering, the question, “what if everyone in the world lived like us?”

To make the graphic, De Chant started with the Global Footprint Network’s 2011 estimates of the average “ecological footprint” of people from several countries. (The footprint is a calculation of how much land it takes to provide the average person with everything they consume, including food, goods, and energy, for one year. It incorporates the more familiar “carbon footprint” in the form of the amount of land needed to offset the total greenhouse gas emissions caused by the average individual.) Next, he multiplied the footprint by the total population of the world (about 7 billion) to figure out the total amount of land needed.

Assuming we were able to use all the land on the planet–with the exception of Antarctica– here’s how much of Earth(s) we would need if we all lived like people in Bangladesh (or India. Or France. Or, yes, the U.S):