Racing to Save Bats From Catastrophic Extinction, Biologists Turn to New Tools

What would the United States look like without bats? As winter approaches, biologists seek new methods and technologies to help control a potentially devastating ecological disaster 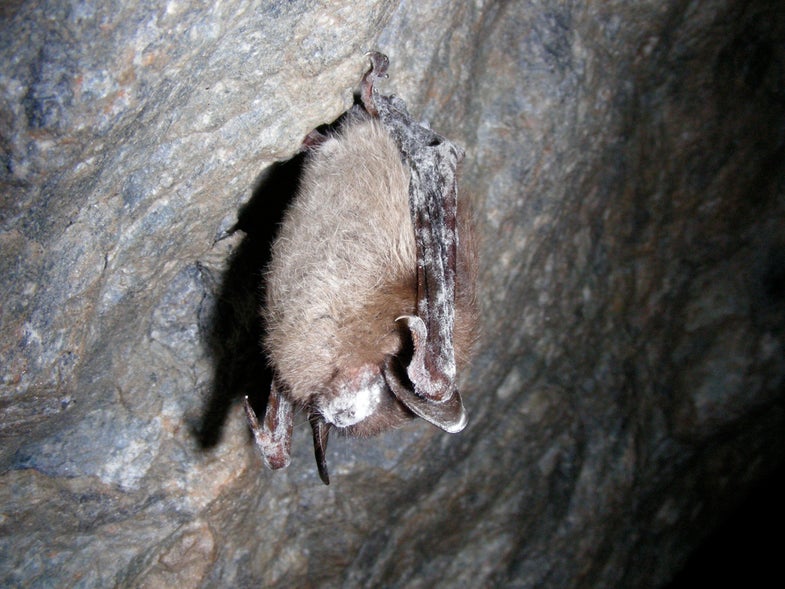 Tom Kunz has been studying bats throughout New England for more than four decades. In annual treks to remote caves, he and other researchers from Boston University capture bats, banding them to track their migration patterns and movement over the years. During trips to bat hibernacula—the bats’ winter hideouts—he grew accustomed to cave walls covered in huddled masses of bats, tens of thousands strong. Aeolus Cave in Vermont, the largest bat hibernaculum in the northeast, has long been a winter home for more than 100,000 bats. Kunz regards them fondly, like old friends. What he sees today brings him to tears.

Two years ago, a new, potent fungus was found rampaging through New York, Vermont and Pennsylvania, wiping out entire colonies of bats Kunz had studied since the Johnson administration. He and a group of graduate students visited Aeolus in January 2009 and were appalled at what they saw: Tracks in the snow made by crawling, starved bats; birds eviscerating bat carcasses outside the cave entrance; bats frozen into ice stalagmites, having died while trying to climb to higher ground; and a cave carpeted in bat bones.

“You couldn’t step on the cave floor the last two winters without walking on dead bats. It was just horrible,” Kunz said. “I’m not an emotional person, but I was in tears when I saw this … it’s just devastating. It’s unprecedented in the annals of science.”

As cold weather approaches, researchers are bracing for countless more animals to succumb to white-nose syndrome. Meanwhile, biologists are using laser cave-gates, infrared cameras, temperature-sensitive radio transmitters, genetic testing—even artificial caves to follow the bats and the fungus. They’re hoping technology can lead them to clues about how the fungus evolved, why it is harder on certain bat species than on others, and maybe, how to stop it.

“With our traditional methods, we’re stumped, so we are trying to figure out what we can do. We really look to technology to help us answer some of these questions,” said DeeAnn Reeder, a biologist at Bucknell University.

Since 2006, about a million bats in the northeastern United States have died during hibernation. The culprit is white-nose syndrome (WNS), caused by a fungus called Geomyces destructans that biologists believe arrived from Europe. The bats awaken every few days, burning their precious fat reserves; ultimately, they freeze, starve to death or are picked off by opportunistic predators. 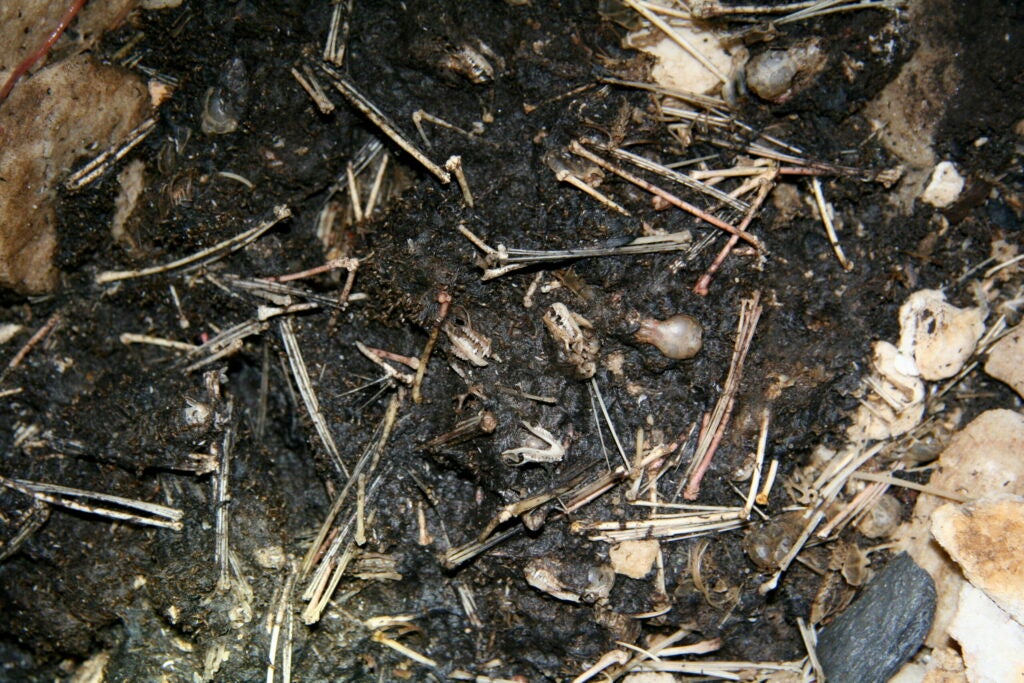 A study published in the journal Science in August suggested things will get even more dire for the little brown bat, the most common bat species. In the worst-case scenario, the study points to a regional extinction of 99 percent in 16 years. It’s a grim picture, said Winifred Frick, lead author of that study and a postdoctoral researcher at the University of California-Santa Cruz.

“These weren’t like slowly declining and this thing is starting to get them. They were doing fine,” she said.

Bats are highly social, hibernating in close quarters over winter and traveling over long distances to mate. G. destructans likely spreads from bat to bat, but researchers think humans could spread it, too; earlier this month, the US Fish & Wildlife Service closed caves in national parks and abandoned mines throughout the West, hoping to prevent unwitting spelunkers from spreading the fungus. The FWS also awarded $1.6 million to study the disease.

At an annual bat conference later this month in Denver, biologists will discuss efforts to prevent the fungus’ spread into the western US and Mexico, where bats are key pollinators and insect predators.

A little brown bat will eat at least half its body weight in insects every night from April to October, Kunz said. When a female bat is nursing her pup — bats give birth to one pup per year — she will eat her entire body weight every night. Multiplied by a few million bats, that’s several metric tons of insects removed from the air throughout North America.

In 2008, Kunz and a dozen collaborators studied the economic impact of 1.2 million Brazilian free-tailed bats in an 8-county region of Texas. They found that if the bats died out, farmers would have to spend $750,000 to $1.2 million on pesticides every summer to protect their cotton crops.

“Without bats, people are going to end up using more pesticides, there will be more water and soil contamination, more human contamination,” Kunz said.

Rick Adams, a biology professor at the University of Northern Colorado, is preparing for the worst if WNS hits the western US. Affected colonies have an 80 to 100 percent mortality rate within two years, he noted.

“If it gets into the West, it’s really going to accelerate even further and affect so many more species of bats,” he said. “Ecologically, it would be an Armageddon type of scenario.”

To track white-nose bats’ errant behavior, Reeder and her colleagues at Bucknell glue bright dots onto bats’ backs. The iButton data loggers are about the size of an M&M; to make them even smaller, Reeder and her team rip them open, cut down the circuit board and swap for lighter batteries.

“Half of what we do is really high tech, and half of it is duct tape and jury rigged,” she said. 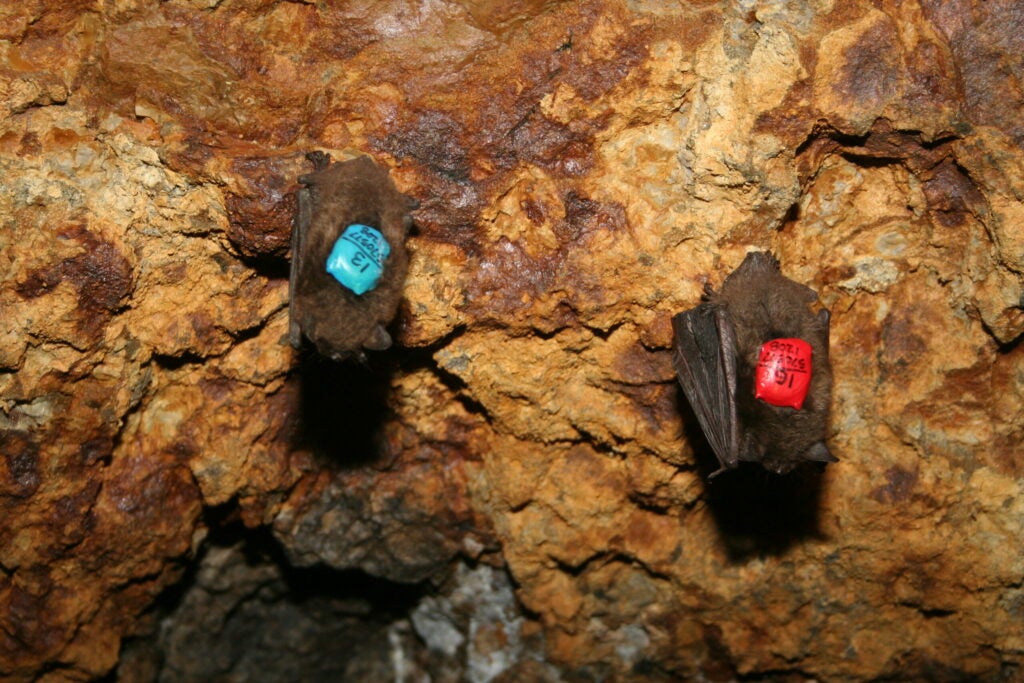 These little brown bats are outfitted with M&M-sized; data loggers that track their body temperature. Bats with white-nose syndrome wake up frequently when they should be in torpor; this burns fat reserves and leads to their death.

The devices can record 32,000 temperatures, providing a detailed profile of a bat’s winter activities. They should be in a state of torpor, arousing no more than every couple weeks. But the iButtons show that sick bats wake up every couple days, Reeder said.

They also don’t respond normally to touch, suggesting something is wrong with their sensory systems. Reeder uses a paintbrush to tickle bats and monitor their body temperature to gauge their reactions.

She also uses artificial caves—she describes them as glorified refrigerators—to compare healthy and sick bats’ behavior and study the pathogen in a controlled environment. She has biologists in the field right now collecting bats and bringing them to her lab to hibernate in the artificial cave. She hopes to gather 500 bats through mid-November, she said.

Reeder has also been shocked by the losses of bats throughout Pennsylvania, her home turf. One of her heavily-studied sites, the Shindle Iron Mine, normally has more than 1,000 bats. Now it has six.

Kunz uses thermal cameras and closed-circuit televisions to count bats; he has worked with a visual algorithm system that can track each bat as a pixel on the screen, providing an accurate count.

Others are using an infrared laser “beam-break” system to track the bats. It involves pairs of lasers on either side of a cave entrance, said Mylea Bayless, conservationist with the Austin, Tex.-based group Bat Conservation International. Bats will break the beams as they enter and exit, and researchers can tell the direction of their movement by the way they break the beams. Biologists in Wisconsin developed the system to track bat populations, but it’s also an effective way to watch for telltale signs of WNS.

“Bats flying around in January in Wisconisn is not normal. If we see peaks of activity during times of the year or times of day we consider to be abnormal, that can trigger an alert for a biologist to go check it out,” Bayless said.

This summer, conservationists installed four systems at endangered bat sites in Kentucky and southern Indiana. There are plans to install more in Tennessee, Illinois and Missouri, but they’re expensive, Bayless said.

Along with tracking ill bats, biologists are looking for ways to help survivors. Kunz is presenting a paper at the Denver conference on providing artificial roost spaces in buildings, especially in areas where bat populations have been decimated by WNS.

“When that happens, you don’t have this warm body of bats clustered together, which facilitates growth of their young,” he said.

Roost modules provide enclosed spaces where small numbers of bats can cozy up with each other, ensuring conditions are warm enough for pups to grow and mothers to produce milk.
Backyard bat boxes can also help, he said.

But much more work is needed to understand exactly what’s happening and what biologists should do. The FWS grants provide some help, but biologists say they need more funding, for genetic testing to determine resistance; field tests to pinpoint the fungus before it is evident; and research for possible anti-fungal treatments. Mycologists said in September they had concocted a treatment for white-nose fungus, but bat biologists remain skeptical.

Adams believes bat losses will spur people to action simply because of the aftershocks.

“This is one of those situations where humans are definitely going to see the effects of it. It’s like your health; you don’t think about it or notice it until it’s gone,” he said. “Bats pull tremendous numbers of insects out of the air every night and we don’t thank them for that often enough. When they disappear, people are really going to start noticing.”