This probiotic is going to bat against a horrifying fungal plague

It’s one promising tool to fend off the fungus that causes white-nose syndrome. 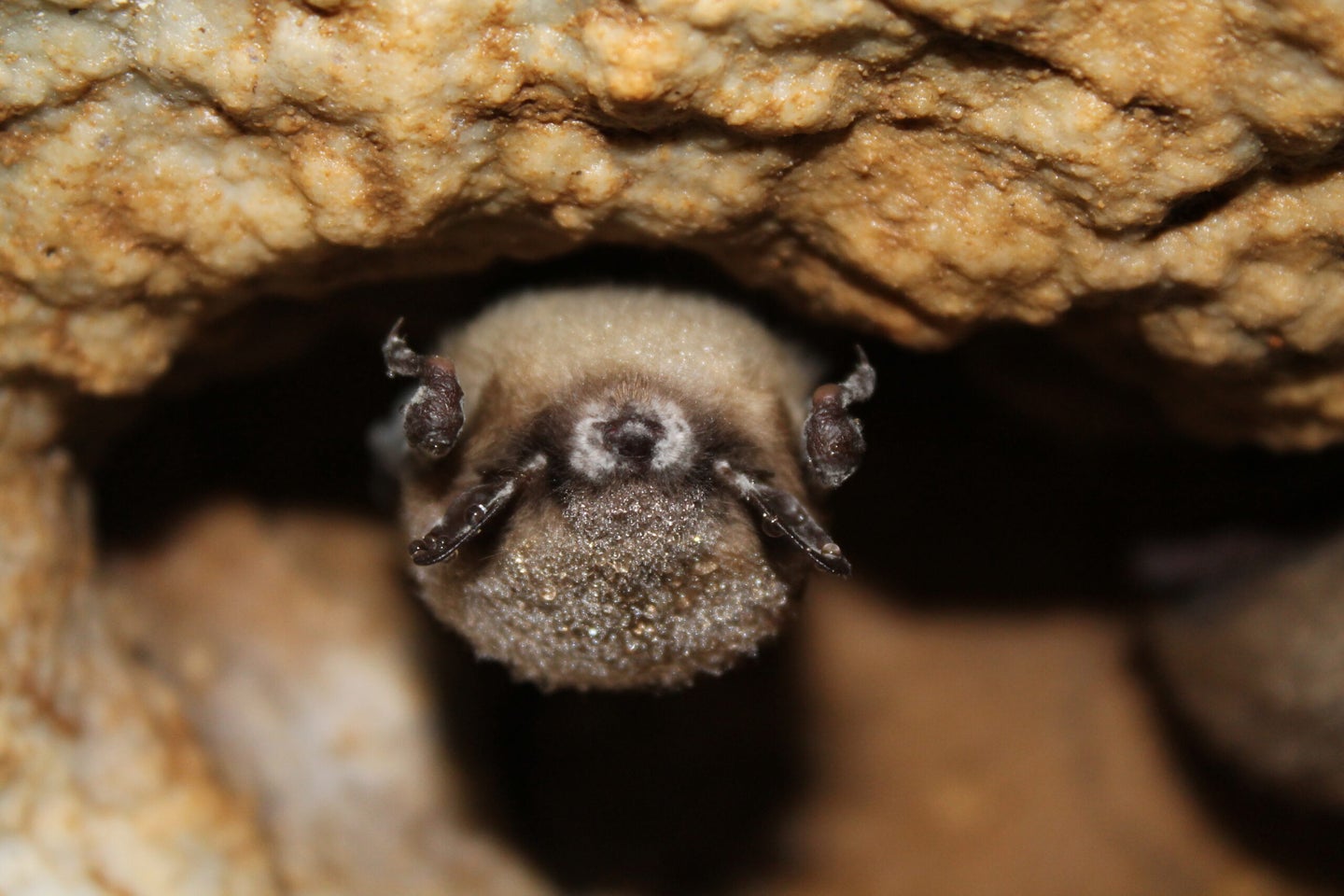 Since it was first observed in 2006, white-nose syndrome—a fungal disease spread by the aptly named Pseudogymnoascus destructans—has ravaged bats across the United States and Canada, threatening to wipe out several species. Biologists have found infected bats in 33 states and seven Canadian provinces, but potential treatments are still in their early stages.

A bacterium could prove to be a hero for these animals. On Monday, scientists reported that bats sprayed with the probiotic microbe Pseudomonas fluorescens before hibernating are more likely to survive the winter and beat the infection. “There’s a number of treatments [for white-nose syndrome] that are being worked on currently,” says Joseph Hoyt, research scientist at Virginia Tech and lead author of the study, which was published in the journal Scientific Reports. “This is the first one that is shown to be effective in a field study.”

The fungus takes advantage of the flying mammals during their winter hibernation, when they roost in caves and wait out the cold by living on stored fat. The pathogen thrives in the cool and moist conditions of caves. While the bats try to snooze, it grows into a visible, fuzzy mold on their faces. The infection irritates the bats, causing them to wake up and burn through stored fat. The hungry, sick animals will often leave their shelter in the dead of winter, after which they starve or succumb to the cold.

Scientists are trying to save these bats by finding ways to slow fungal growth, allowing the creatures to make it through the winter. In previous work, Hoyt found that bats that were seemingly resistant to the fungus naturally carried the Psuedomonas microbe. So, he wanted to see if inoculating at-risk individuals with this organism could boost their survival.

In fall 2015, Hoyt and his team started a field test of the probiotic, using 89 little brown bats that roost in an abandoned mining tunnel in Wisconsin. They weighed the bats to assess how much fat they’d stored and outfitted them with tracking chips. The scientists sprayed some of the bats with a probiotic solution and left others dry—a control. They placed half of the bats, including probiotic and control, in cages, and left others to fly about freely.

Among the probiotic-treated free-flying bats, 46.2 percent left the cave after March 8, roughly the date when it was warm enough for them to survive and there were plenty of insects to feed on. That survival rate is five times greater than the control bats, 8.5 percent of which died in the cave.

The caged bats didn’t fare so well. There was no difference in survival between treated and control bats. Only a single bat (uninoculated) survived the winter. Hoyt thinks this is because the fungus-laiden bats frequently disrupted healthier neighbors in the cages. So even bats with less fungus struggled to survive because they were constantly getting woken up and burning through their fat reserves . “That means we didn’t actually test the efficacy of our treatment,” says Hoyt. “We included [the cage experiment] because … our window to work with bats is so limited. We need to be learning as much as possible from each other as we can.”

The results of the study are encouraging, says Jonathan Reichard, national white-nose syndrome assistant coordinator for the U.S. Fish and Wildlife Service. “Everyone I talk to is eager to have this kind of information,” he says. “This improved survival [finding] is a really positive step.”

Reichard still has his concerns. Scientists will need to figure out how to scale up the probiotic treatment to protect more bats, he says. In the experiment, researchers sprayed each bat individually with a spray bottle. And using live organisms is inherently risky. In the study, the team had previously swabbed the bats of the mining tunnel and found that P. flourescens was already present on some; that way, they weren’t introducing a totally new bug. “The whole problem we’re dealing with is because a fungus is moving around the country,” says Reichard. “We need to be especially cautious to make sure those [probiotic] microbes are not going to cause more harm than good.” But the scientific community seems more optimistic than ever now that some bats can be saved from this puffy white scourge.

Scientists in other parts of the country are looking for beneficial microbes already present on local colonies of bats. By isolating local strains of the helpful bacteria, researchers can avoid introducing new organisms, which can sometimes have unintended negative consequences. The goal would be location- and species- tailored probiotics for sick bats, says Reichard.

Still, more than half of the treated, free-flying bats in Hoyt’s experiment died, meaning the Pseudomonas fluorescens probiotic is far from a miracle cure. Hoyt notes it may be possible to modify the dose or combine it with other treatments. Scientists are testing other options, including a vaccine, which a recent study found effective in captive bats. It may also be possible to use an antifungal agent to clean the caves prior to winter, enhancing the bats’ odds. “I think it will take a lot more than just this [probiotic], there’s no silver bullet,” says Hoyt. Still, he adds, “this definitely is one more tool that we have to try to reduce disease impacts.”