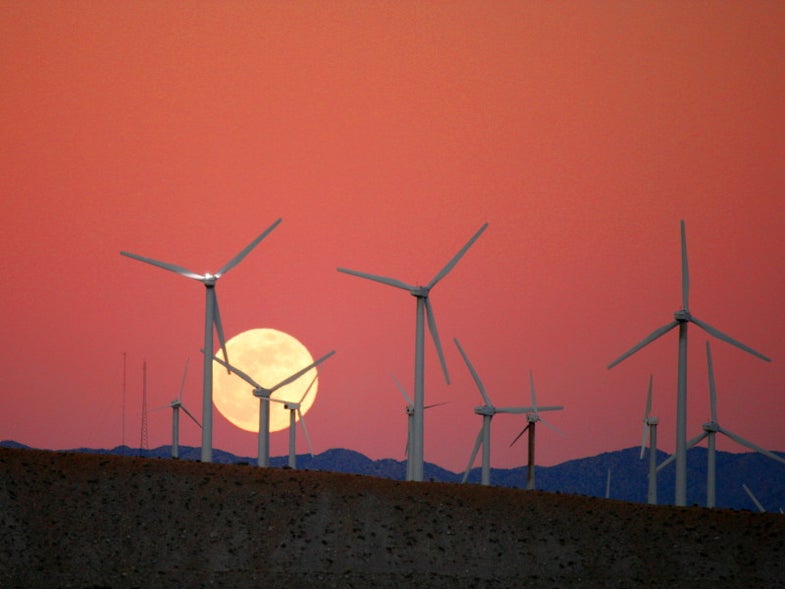 DENVER — Bad news for bats: Mother Nature is not the only thing wiping them out. Anthropogenic climate change and renewable energy technology are also wreaking havoc on bat populations throughout North America. Biologists are looking for ways to protect bats not only from a devastating fungus, but from wind turbines and global warming.

Warmer temperatures and drought brought on by climate change could disrupt migration and mating patterns, researchers said this week at the North American Society for Bat Research annual conference. Rick Adams, a biology professor from the University of Northern Colorado, published a paper in August that showed bat reproduction declines when conditions mimic climate change. Examining 15 years of data from bats along Colorado’s Front Range, he found as temperatures rise, the proportion of reproductive female bats goes down. A colleague at UNC, Mark Hayes, hypothesized that the same will hold for drier conditions.

A warmer climate could hold some unexpected benefits for white-nose syndrome — researchers think bats that are commonly found in the southeastern United States, like the tricolor bat, could move farther north and replace the little brown bat, which is being decimated by white-nose. What’s more, the fungus grows best in cold conditions, so if mid-Atlantic and northern caves get warmer because of climate change, it could spread more slowly or even die out. But Hayes’ study found warming climates will ultimately kill off bats, too.

Ironically, one method to ameliorate climate change could make matters even worse for bats. Wind turbines, favored for their carbon dioxide-free power generation, are deadly for bats, especially tree-roosting species that migrate over long distances. One study from the Blue Sky Green Field Energy Center in Wisconsin found for every megawatt of wind energy generated, 22 bats die every year.

Unlike birds, which often perish at wind farms when they collide with the turbines, bats die in blade vortices. Rotating turbine blades create negative pressure pockets, and when the bats fly through them, their lungs explode.

“Some wind sites are killing hundreds to thousands of bats in a single fall migration season,” said Paul Cryan, a research biologist with the US Geological Survey. One wind farm in New York is estimated to kill more hoary bats every year than have ever been collected for scientific studies, he said.

Some scientists have proposed turning off wind turbines during peak migration periods, and others have proposed unconventional solutions like painting turbines darker colors to baffle the bats. But a new study to be published Monday in the journal Frontiers in Ecology and the Environment says there could be a simple fix: Reducing the cut-in speed, or the wind speed at which wind turbines switch on.

Most wind turbines in the US are programmed to begin rotating and producing power once wind speed has reached about 8 to 9 mph, according to the Ecological Society of America. Ed Arnett, a biologist with Bat Conservation International, says raising that speed to 11 mph can reduce bat fatalities from 43 to percent up to 93 percent. Even better, the annual energy loss was less than 1 percent.

Wind turbines will still kill bats — during two summers of study at a Pennsylvania wind farm, Arnett sometimes found fresh carcasses even when turbines turned on less frequently. But when they turn on at higher wind speeds, they will not kill as many. For the most part, bats don’t fly when it’s too windy.

“Rarely do you see such a win-win result in a study,” Arnett said. “There is a simple, relatively cost-effective solution here that could save thousands of bats. This is good news for conservation and for wind energy development.”

Researchers still don’t know why bats are attracted to wind turbines, however. Some hypothesize that they mistake them for trees, which explains why 75 percent of bat deaths are among tree-roosting species. Most bat deaths at wind turbines happen in early fall, which is mating season; the “tall tree hypothesis” suggests that bats think wind turbine towers are attractive mating sites. “Tall things are mistaken for singles bars,” said Craig Willis, a biologist at the University of Manitoba.

To study this, Willis and Cryan examined the mating readiness of bats killed by wind turbines in New York, Manitoba and Alberta, and found most male bats were ready to reproduce. The researchers couldn’t find evidence that the bats were copulating at the wind farm, but their genitalia indicated it was the right time of year, Cryan said.

“It’s easy to come up with these hypotheses, but this is one I hope we can disprove,” he said. “If you are selectively causing the death of the reproductive class, you are in trouble from a conservation standpoint.”

Bats are a keystone species — disruptions to their reproductive patterns and populations will have cascading effects throughout entire ecosystems. Protecting them from wind turbines is just one more thing for conservationists to worry about.