How Crows Recognize Individual Humans, Warn Others, and Are Basically Smarter Than You

Also, crows are scared of Dick Cheney. Told you they were smart 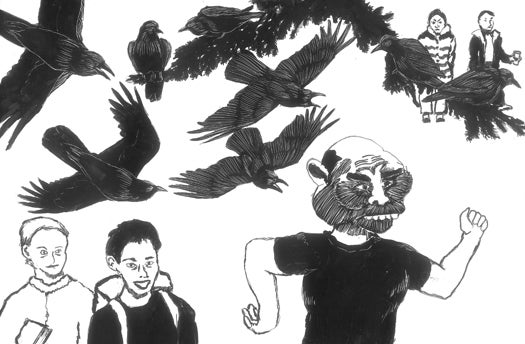 The corvid family–a widespread group of birds made up most prominently of crows, ravens, and magpies–are no ordinary birds, with a brain-to-body-weight ratio and cognitive abilities equal to apes and dolphins. This excerpt, from the great new book Gifts of the Crow: How Perception, Emotion, and Thought Allow Smart Birds to Behave Like Humans_, by John M. Marzluff and Tony Angell, details an experiment in which students and faculty at the University of Washington tried to discover if crows can recognize individual humans–and what they’d do with that information._

A couple of days before Valentine’s Day 2006, students and professor donned grotesque masks—bold, heavily browed, reddish-orange cavemen—and captured seven crows on the University of Washington’s campus. They tagged the ensnared crows with standard plastic and metal bracelets like those we had fit onto Light Blue, Dark Blue’s legs and released them after only a few minutes. On Valentine’s Day John slipped into his Dick Cheney face and strolled across campus looking for crows to record their reactions. He found nine birds, and while one seemed a bit anxious and flew off calling, the others basically ignored him. The students were more reactive, as being Dick Cheney on a liberal college campus wasn’t easy, but from the crows’ perspectives Dick was just an average Joe.

The local crows screamed, dove, and followed anyone wearing a mask of Scott.Two days later, John left the Cheney mask in the lab and morphed once again into the caveman. He stepped outside his office building at 11:07, eager to learn whether the crows would remember the face of the man who had captured them earlier in the week. At 11:15, he found a crow near the student union building and began to approach. Immediately the bird flew into a tree and gave a series of harsh calls, flicked its tail, and stared directly down at him. This scolding behavior, identical to how these rowdy birds typically address their natural predators, quickly attracted a second bird. The pair now cautiously eyed John and issued a real tongue lashing. The first scolding bird was unbanded—John had never even handled this aggressive beast. But the second bird wore bands, signaling that it had personally met the caveman a few days earlier. This bird had good reason to scold—the caveman was a proven threat. But the first bird could have known only secondhand about the dangerous caveman. Perhaps she had seen us catch and band her colleague. John continued his walk and in total encountered thirty-one crows, three of whom scolded him.

The first run of the experiment was a success. At least three birds recognized and harassed the dangerous caveman. In contrast, none responded to the caveman prior to trapping, and none responded to the “control” face of Dick Cheney, who had never directly participated in trapping. We repeated these initial tests with similar results over the next year. We even recruited other students to run the tests for us. We wanted to make sure it wasn’t just our imagination or perhaps the way we approached the crows that made them scold the caveman and ignore the vice president. We set the students loose on campus with masks and notebooks. Their results confirmed ours in every aspect: the crows scolded the caveman, not Cheney; many of the scolding birds were unbanded; and it was the face that triggered the ire of the crows.

We have continued and expanded our initial investigations. In addition to the caveman on campus, we have now confirmed other crows’ abilities to discriminate dangerous from neutral faces in four new settings. And we have done so using masks molded from our friends’ faces—ordinary men and women faces much less distinct than the caveman’s. In downtown Seattle for example, our friend Scott’s face was used during trapping. As with our campus experiment, the local crows screamed, dove, and followed anyone wearing his mask while ignoring those wearing any of the other five masks. In rural Maltby, Vivian was the trapper. There she was scolded while Scott and the others were more or less ignored.

When encountering a single face, crows do occasionally scold a person who is not dangerous. It seems safer to cry wolf occasionally rather than ignore a real threat. But when we presented the crows with a choice, their ability to distinguish among people was uncanny. In this experiment two of us approached a crow while we each wore a different mask, one dangerous and the other neutral. As we neared the crow, we diverged in opposite directions for a while, then reconvened, and diverged again. As we paraded back and forth, invariably the crow lit out after the dangerous person, following him and letting the other masked, but harmless, person strut unscathed.

Crows may remember our facial features or perhaps have a simple signal—maybe a special call—for dangerous people in general, though the latter seems not to be the case. We recorded the voices of crows as they screamed at us and at hawks and raccoons and found no obvious differences in the calls to people generally or to dangerous people specifically. We know from other studies that corvid alarm calls indicate the caller’s identity and often the degree of threat posed but not the specific identity of a predator. Siberian jays, for instance, adjust their alarm calls to encode the hunting behavior of hawks—moving versus perching versus attacking. Crows may do something similar; the intensity, duration, and pace of scolding indicate the degree of danger a predator poses. But this adjustment of scolding occurs whether in response to a hawk, coon, or caveman.

Gifts of the Crow is available now.