Video: What We Saw at the World Science Festival’s Innovation Square

A robot petting zoo, complete with a flying robo-bird, plus the world's lightest material and an algorithmic dance-off 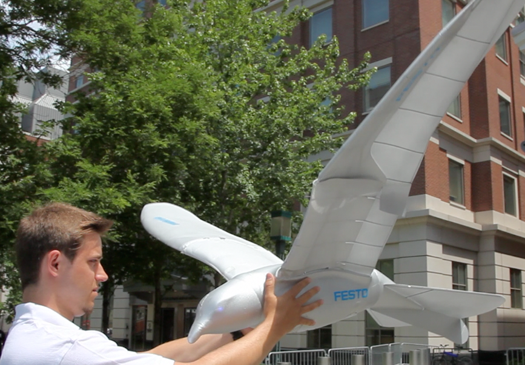 MetroTech Plaza in Brooklyn was packed with science and technology enthusiasts on Saturday, eager to see the sights of the World Science Festival’s Innovation Square. The day-long collection of exhibits, performances, lectures and games was designed to be a “technophile’s adventureland,” and didn’t disappoint. We stopped by to check out the robot petting zoo, see some robots play soccer, and enjoy computer-based dance choreography.

Festo Smartbird: The engineers at Festo’s Bionic Leaning Network are well-known for their interest in artificially replicating animals (and weird things that propel themselves by flipping inside out), but they’ve truly outdone themselves with the Smartbird. Inspired by herring gulls, the Smartbird can take off, fly and land by itself, mimicking the behavior of real birds to an uncanny degree. Due to the breezy day at Innovation Square, the bird was launched by hand and controlled via a ZigBee radio, though the result was just as stunning. For all its sophisticated machinery and two-meter wingspan, the Smartbird weighs less than a pound, limiting the amount of flapping it needs to do to stay aloft. Festo has developed many other artificial animals, including flying penguins, elephant trunks and jellyfish (next). Check out video of the bird:

Festo AquaJelly: Not wanting to limit themselves to sky-borne robotic animals, Festo also showed off their convincing jellyfish replica, AquaJelly. Consisting of a translucent hemisphere, a watertight body and eight tentacles used for propulsion, AquaJelly is even capable of swarm behavior when grouped with its fellow sea robots. In order to detect other jellyfish, it is fitted with eleven infrared diodes, visible inside its dome. It can sense when another AquaJelly is approaching it to within 80 centimeters, and will make space for the intruder. Video:

Robot Soccer Gods: The thinking behind RoboCup, an annual soccer tournament for robots, is that if a robot cannot play a simple game of soccer then it probably won’t be useful for the more complex tasks we expect from humanoid machines of the future. As Virginia Tech engineer Dennis Hong (whom we’ve profiled in the past) explained at Innovation Square, robot soccer forces engineers to up their game when it comes to independent robot mobility and autonomous thinking within teams. The ultimate “goal” is to build a team capable of defeating a human soccer team by 2050.

Though Hong’s players can’t yet take on Ronaldo or Zidane, they remain the top robot soccer gods in the world. Virginia Tech’s CHARLI-2 and DARwIn-OP won the Adult Size and Kid Size class titles respectively at last year’s RoboCup in Istanbul, bringing the title to the United States for the first time in a decade dominated by the Japanese and German teams. The robots collected their fair share of accolades throughout the day, especially the unfathomably cute DARwIn-OP (taking a spill below).

CCNY’s City-ALIEN: The robotics lab at the City College of New York introduced Innovation Square visitors to City-ALIEN, an urban navigator with a cost-effective solution to traditional mobile robots. Instead of using a laser rangefinder method of mobility, used by most intelligent ground vehicles, the City-ALIEN finds its way using two mirrors and a camera. The camera is placed under the silver dome that makes up the body of the robot, and points up at a smaller mirror, allowing it to see two reflections that together create depth perception. Indeed, City-ALIEN used this shiny set-up to curiously explore its surroundings at Innovation Square, hesitating when faced with obstacles such as the crowd of onlookers surrounding it.

Artificial Intellidance: Computer science and dance may seem like an odd couple, but that’s part of the fun of Artificial Intellidance. Created by choreographer Caitlin Trainor and Columbia University computer scientist Apoorv Agarwal, the performance encapsulates machine learning through movement. That “machine” is an algorithm the artists referred to as a “perceptron”–it’s a predictive algorithm that specifically decides whether information falls into one of two categories.

The narrative of the performance follows the perceptron attempting to categorize the motion of her surrounding dancers, as a dialog explaining the process is played in the background. Slowly, she learns to distinguish the motions of ballet from modern dance, resulting in a climactic celebration of her success with both in Artificial Intellidance’s inventive collision of art and science.

World’s Lightest Material: Nano-architect Alan Jacobsen demonstrated the extraordinary properties of the “microlattice,” the world’s lightest solid material. Developed at HRL Laboratories, the microlattice is just 0.9 milligrams per cubic centimeter, or about 100 times lighter than Styrofoam. The most dramatic demonstration of the metal’s low weight resulted from Jacobsen dropping a sample from a height. It took ample time floating to the table, behaving more like a piece of dandelion fluff than a solid structure. According to Jacobsen, the material has many commercial applications though his booth focused mainly on better padding and sportswear.