Perhaps no creature packs a more intimidating punch — especially relative to its size — than the peacock mantis shrimp.... 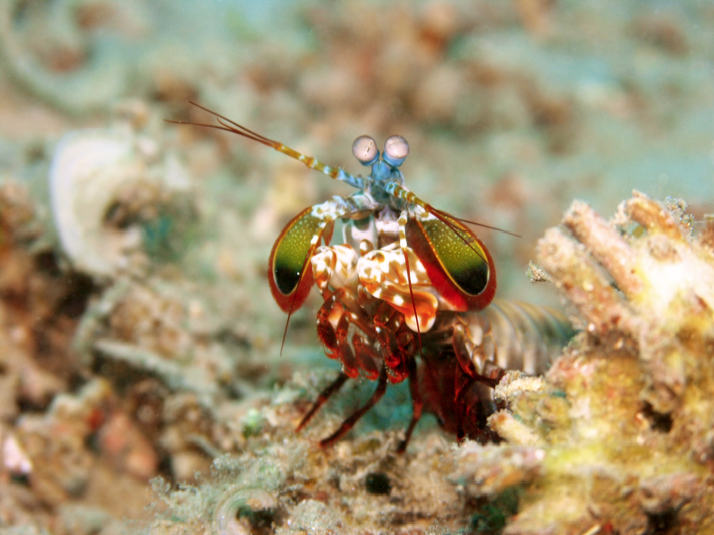 Perhaps no creature packs a more intimidating punch — especially relative to its size — than the peacock mantis shrimp. It feasts on snails, crabs and other mollusks and crustaceans by smashing through their shells with its front hammer-like claws, delivering 500 Newtons of force. This is powerful enough to punch through aquarium glass.

But how can the crustaceans (which are neither shrimp nor mantis but just look like them) survive with their claws intact? Turns out they’ve evolved a three-pronged structure that is stronger and tougher than any synthetic material. The claws contain multiple structures that each guard against catastrophic breakage, scientists led by James Weaver at Harvard University say. Mimicking this structure could lead to better body armor for humans.

The beautiful mantis shrimp seen above resembles a “heavily armored caterpillar,” in the scientists’ words, but it’s a special creature in many ways, with well-known complex compound eyes that allow it to see from ultraviolet to infrared. It’s a highly aggressive little creature, as you can see in the video below or in any number of YouTube posts.

Even when their claws are damaged after raining down blow after blow, the animals are unbroken. Weaver and colleagues examined the claws at the nanoscale to determine the structures that accomplish this. There are three areas, which each contain different mineral compositions and capabilities, the researchers say.

The claw folds up into a club when the animal is about to throw a punch. The whole appendage itself is very thick, up to five times as thick as the adjacent appendages, according to the researchers. The impact zone, the outer part of the claw, contains the mineral hydroxyapatite, a thin material that is also found in vertebrates’ bones and teeth. It’s only 50 to 70 nanometers thick. Normally, such a thin layer would fracture easily — but it’s backed by a supportive matrix of chitosan, which disperses the impact and prevents any crack from spreading. And the third region, which runs along the sides of the claw, is even less stiff, helping disperse the blow even further.

Designers of armor could use models of these materials to improve impact resistance, according to K. Elizabeth Tanner of the University of Glasgow, who wrote a companion article about the mantis shrimp, which is published today in Science. Existing composite materials using ceramic, fiberglass, Teflon and rubber don’t perform as well as the shrimp’s natural materials, she writes.

Weaver and colleagues say it could also improve in non-combat-related materials.

“The structural lessons gained from the study of this multiphase biological composite could … provide important design insights into the fabrication of tough ceramic/organic hybrid materials in structural applications where components are subjected to intense repetitive loading,” they write.