Clearing the muck from an oil spill is tough enough without having to worry about collateral damage, but designer Hsu... 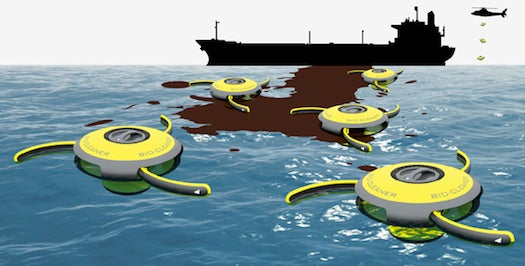 Clearing the muck from an oil spill is tough enough without having to worry about collateral damage, but designer Hsu Sean is looking to create a Roomba-like Bio-Cleaner drone that degrades oil while keeping animals out of harm’s way.

An overview on Yanko Design shows how, after a spill, several of the drones could be dropped from helicopters above the ocean and into the water, where they could maneuver into a formation around the spill and use stored oil-hungry bacteria to clean house. An acoustic wave device installed in each drone would keep fish and other wildlife away from the danger/cleanup zone. If completed, the drones would also act autonomously while on a mission, staying powered by using ocean waves and hopefully not coordinating an autonomous paratrooping pseudo-Roomba uprising.

It may be just a wish-upon-a-star dream that we’ll ever see one of these in action, but it’s at least good to see oil spills given a creative solution (read: probably impossible robot-based solution; incidentally, it’s not the first time we’ve seen one of those). The drones are still in the concept phase right now, and there’s no telling exactly when Hsu Sean’s design will be manufactured, if ever. A lot of it – like the specifics of the bacteria and the water-based engine – seems destined to wind up mired in concept limbo.

The closest thing you’ll ever get might be throwing your Roomba into the ocean from a helicopter, which probably isn’t going to do all that much for the environment but could at least keep a few dolphins from needing to sweep the house this week.