Too Much Monkey Business Leads to Monkey Vasectomies

A rhesus macaque awaits a vasectomy at a wildlife rescue facility in Himachal Pradesh, India. The state’s estimated 319,000 monkeys... 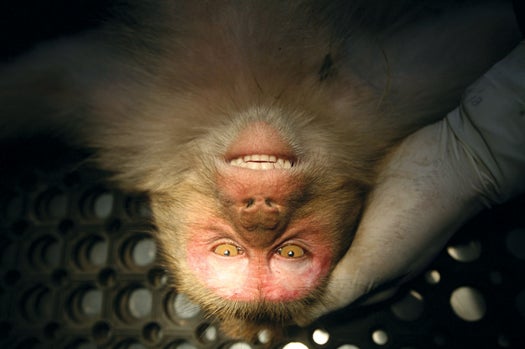 A veterinarian places a monkey on the table for sterilization inside an operation theatre at a monkey rescue centre run by forest and wildlife department Tutikandi in the northern Indian hill town of Shimla November 14, 2011. The Himachal Pradesh state government is offering a reward of 500 Indian Rupees ($9.50) for every monkey caught by a member of the public in an effort to control their numbers. Monkeys are increasingly seen as a nuisance in places like the capital Shimla, where they harass people and other animals on the roads and rifle through garbage bins looking for food. Monkeys caught are taken to one of four sterilization centres, where they are neutered before being released back into the same area they were trapped in. There were at least 317,000 monkeys in Himachal Pradesh according to the most recent survey of the primates, which was conducted in 2004-05. Picture taken November 14, 2011. REUTERS/Mukesh Gupta (INDIA - Tags: ANIMALS SOCIETY HEALTH). © Mukesh Gupta / Reuters
SHARE

A rhesus macaque awaits a vasectomy at a wildlife rescue facility in Himachal Pradesh, India. The state’s estimated 319,000 monkeys frequently ransack garbage cans and harass citizens. Last year, the state government announced a bounty of 500 rupees ($9.50) to anyone who captured and transported a monkey to a sterilization center, and program administrators estimate that they will neuter 200,000 monkeys, at 25 sterilization centers statewide, by June.

Sterilization initiatives for troublemaking monkeys aren’t unprecedented. In 2002, Hong Kong began a similar program, but the city’s conservation department soon discovered that the local macaques were difficult to catch—the animals learned to elude traps and decoys. Still, veterinary staffers were able to sterilize more than 1,500 monkeys, and nuisance calls about them dropped from a peak of 1,400 in 2006 to fewer than 200 in recent years.