How Birds Learn To Sing

By playing back altered versions of the Bengalese finches' songs through these tiny earphones, scientists found that birds improve their singing by making small adjustments rather than large ones 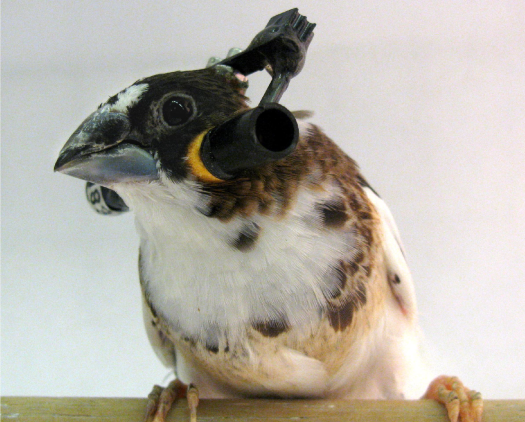 Birds learn to sing in much the same way humans learn to talk: by listening to, and then imitating, the vocal sounds of their elders. Of course, those sounds rarely come out right the first time, but a fledgling’s sense of hearing can tell her just how off the mark she is. If a note is too low, she’ll know to whistle it higher next time, and that feedback helps birds (and us) learn how to communicate.

It sounds simple, but the details of how a bird interprets an auditory signal that she herself has produced then uses it to correct her melody aren’t totally clear. In fact, a recent study shows that some mistakes in vocalization are simply too big to rectify.

For the study, scientists at Emory University and the University of California, San Francisco altered the auditory feedback of six male Bengalese finches by playing back, in real-time, an altered version of the birds’ own sounds.

During several two-week experiments, the scientists used audio processing equipment to shift the pitch of the finches’ vocal sounds by a set amount. In some of the experiments, the scientists shifted the pitch down by just a fraction of a tone–if the birds sang a C, for example, the tiny headphones over their ears would play back a tone halfway between a C and a C flat. See if you can hear the difference between the 2-second clip below and its slightly altered version:

Now, shifted up one half semitone:

In other experiments, the pitch-shift was much larger, so that the birds might sing a C and hear, through its auditory feedback, a B:
The original again:

Surprisingly, the researchers found that the finches made larger adjustments to their singing when they listened to slightly altered versions of themselves than when the pitch shift was large: 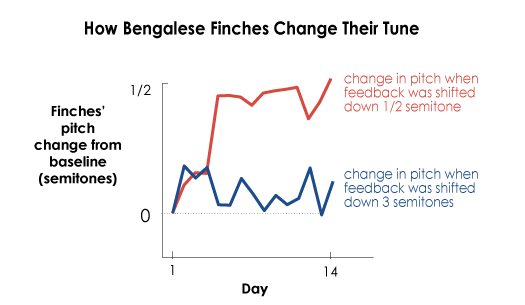 How Bengalese Finches Change Their Tune

As the chart shows, when the finches heard their singing downshifted by just 1/2 semitone, they up-shifted their voices by almost the same amount to correct for the imposed error. But when the alteration was much greater, the birds made little adjustment to their singing.

In addition, the researchers detected a mathematical relationship between the birds’ songs and their ability to correct for errors: The more the musical range of the altered songs overlapped the range of the finches’ original tunes, the more the birds adjusted their singing to compensate for the shift:

When Finches Can Adjust Their Songs

But when the researchers altered the pitch so much that there was no overlap between the ranges of the original and processed songs, the birds did not learn to adjust their own tunes: 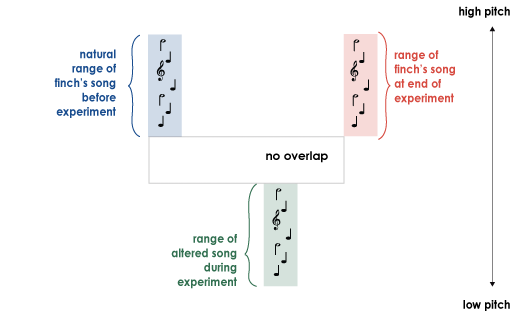 When Finches Cannot Adjust Their Songs

The upshot is the more minor the mistake, the better a bird is at correcting it. Thus birds can fine-tune their vocal instruments until they become the superb singers we know them to be. Whether humans exhibit the same kind of learning pattern–correcting subtle speaking errors with aplomb but balking at more grievous ones–is unclear. But when it comes to singing, if there’s no overlap between the song you are trying to sing and the notes that are coming out of your mouth, you’re probably better off sitting it out at the karaoke bar.