FYI: What’s the Hottest the Earth Has Ever Gotten?

Hot enough to boil oceans and vaporize rock. The highest terrestrial temperatures occurred more than four billion years ago, when... 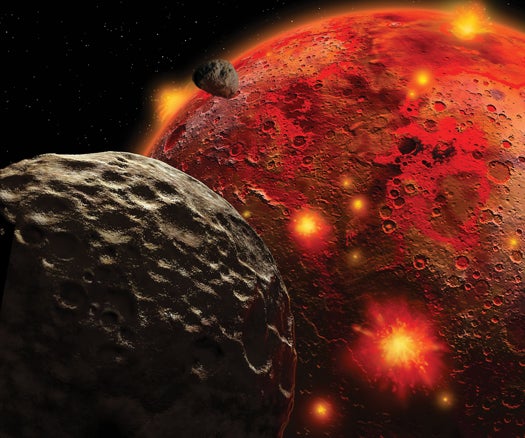 Hot enough to boil oceans and vaporize rock. The highest terrestrial temperatures occurred more than four billion years ago, when a Mars-size proto-planet smashed into the Earth. (The debris from this collision formed our moon.) Within a millennium, the surface air temperature had dropped from a high of about 3,700°F down to 3,000°. Then the planet went into a period of slower cooling that lasted a few tens of millions of years. As the atmosphere thickened with heat-trapping water clouds and carbon dioxide and a shell of solid rock formed around the Earth’s core, conditions stabilized at 440°.

The warmest weather we’ve had in recent times—since mammals diverged from the tree of life—came about 55 million years ago, during a period known as the Paleocene-Eocene Thermal Maximum. In just a few thousand years, global surface temperatures increased by 5° to 10°, with parts of North America experiencing a tropical climate and spring-like average temperatures in the Arctic.

Ask Us Anything
Climate Change