The Cooper Cooler can chill a Coke or Budweiser in one minute. It's the fastest on the market, but the college lab that invented it isn't done innovating yet 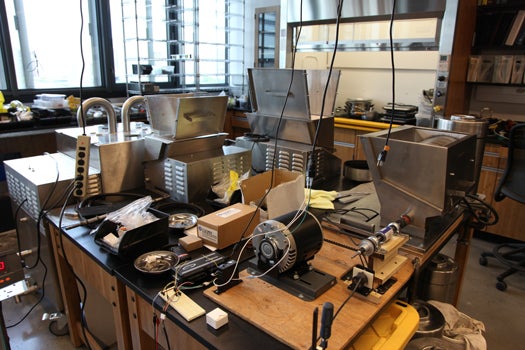 The Energy and Design Research Lab at The Cooper Union, an arts and engineering college in New York City, is probably best known for the Cooper Cooler, which in 1992 became the fastest machine to chill beer, wine, and other beverages: three minutes, from room temperature to frosty cold. It’s every college student’s dream. And that makes sense, because as it turns out, it was created by students.

Two decades later, the lab’s breakout success has positioned it at the center of innovation in a small but important commercial sector—how to make things very cold, very quickly. So what comes next?

The lab is in the engineering wing of the Cooper Union, known also for excellence in architecture and art. Inside, there’s visible evidence of all three disciplines: Each step on the stairs looks like it’s a different length, and the elevator is lined with medieval chain maille. As I make my way upstairs, Greg Loibl, the lab’s head and Michael Gutierrez, manager of R&D, explain that they just moved all of their equipment into a new room. There’s plenty of wire and tubing scattered around. A fridge stands in the corner next to tanks of water, predictably. On the tables are some of their latest projects and, in one corner, the Cooper Cooler.

That’s the lab’s icy heart, and it always has been, right from the beginning–before they even had their own lab. In 1992, Loibl, completing his master’s thesis in chemical engineering, built a prototype instant-cooler that chilled a can from room temperature to 40°F in three minutes–with a few more fixes it cut that to a single minute, at least twice as fast as anything else on the market. In 1996 he founded a company, Revolutionary Cooling Systems, with his co-advisors on the project, Irv Brazinsky and George Sidebotham. This month, the group moved into its own private lab. 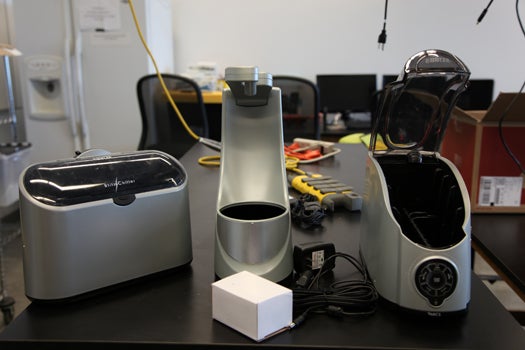 The cooler is a boxy but impressive appliance. Stick water, ice, and a too-warm beverage in, and it spins the drink while it pours cool water over the top. One minute later, the machine beeps and the drink is frosty-cold. I took a hangover-cure-in-a-can–a sort of milky vitamin cocktail named Mercy–and, as promised, got it back nice and chilled. It was messier chilling a bottle of vodka; the shape wasn’t so conducive to cooling. Still, it went down from room temperature to something much more consumable. It was a neat process, and some other people seem to think so, too: Loibl has worked with domestic beer companies like Coors to make customized versions for use in bars and stores.

The cooler was the breakthrough, but it’s been a steady stream of students that have made the Cooler the no-contest fastest cooling appliance on the market. The Cooper Union is one of the top small schools in country, so if the engineering students are diverting their attention to it, it’s going to be good.

But there’s plenty in the lab besides the cooler, and the students work on all of it. They’re usually writing theses on developing products, and if that means tweaking the Cooper Cooler, so be it, even though there are plenty of other projects they can choose from. Now they’re even starting to make their way into the commercial sector: the team has developed a stock-chilling mechanism that instant-cools soup (five gallons in six to eight minutes) so it can more easily stay within FDA regulations. The soup goes in a turbine-type chunk of metal and spins while a bucket of ice goes over the top. 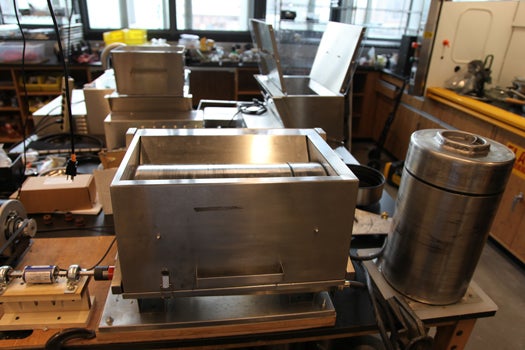 Then there’s something Loibl is excited for that’s a little more…opaque. A patentless machine that can chill beverages during non-peak-energy hours by using something that is “not ice.” That’s the lab’s next step forward. Loibl says “the majority of our research” has been on getting rid of ice, so much so that they’ve spent “the better part” of five or six years on it. Get that done and there’s a bunch of efficient, sustainable products to look into. They’re looking to apply for some grant money right now, in fact.

Maybe years down the road there will even be some broadly helpful new tools produced by the students at the lab. Similar technology could be used in cars for a process that better stores energy under the hood, or in houses as a way to store heat for winter. If that works, it could mean a lot more beer money for consumers and the lab.