Physicists calculate how many newtons of force would be needed to carry the peach across the Atlantic. 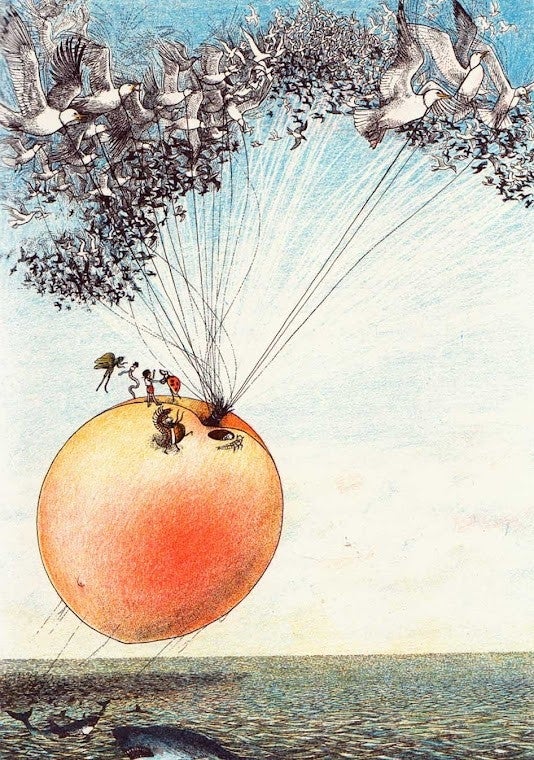 Ah, physics: Taking the world’s greatest mysteries and turning them into cold, hard facts. Even the mysteries in beloved children’s stories. A group of physics students from Leicester University in the UK has subjected James and the Giant Peach, a classic tale by Roald Dahl, to aerodynamic modeling.

In the story, orphaned James seeks refuge with a bunch of anthropomorphized insects inside a huge stone fruit, which is then toted across the Atlantic Ocean by a flock of seagulls. Dahl said it would take 501 birds to do the job: “I shall simply go on hooking them up to the stem until we have enough to lift us. They’ll be bound to lift us in the end,” James explains. In fact, 2,425,907 seagulls would actually be needed, according to the students’ research paper.

Emily Jane Watkinson, Maria-Theresia Walach, Daniel Staab and Zach Rogerson calculated the mass of the peach, which Dahl says is “as tall and wide, in fact, as a small house,” estimating that it would have a radius of 6 meters. They examined footage from the 1996 Disney movie adaptation and calculated its height at 5.7 meters. Performing several other calculations, they determine it would require 4,890,579 newtons of force to lift it. “This greatly exceeds the carrying capacity of 501 Common Gulls,” the students write.

To determine this, they modeled the seagulls as airfoils, which you can think of basically like an airplane wing. These curved shapes create the force known as lift. A common gull can provide 2.02 N of lift, the students write. “For a peach of the dimensions calculated, it would not be possible to fly such a heavy object with the assistance of such a diminutive number of birds,” they conclude.

Their course leader, Mervyn Roy, said the exercise prepares his students for a career in scientific publishing. To be a research physicist in industry or academia, “you need to show some imagination,” he explained.

As The Guardian put it, scientists still have not found the formula for the magic potion that caused James’ peach to grow quite so large. Nor have they figured out how Matilda moved objects with the power of her mind.