The Eagle-Snatching-Baby Video Is Insane, But It’s Also Fake

That video of a supposed golden eagle snatching a toddler in a Montreal park? Yeah, that's fake. Update: Confirmed. 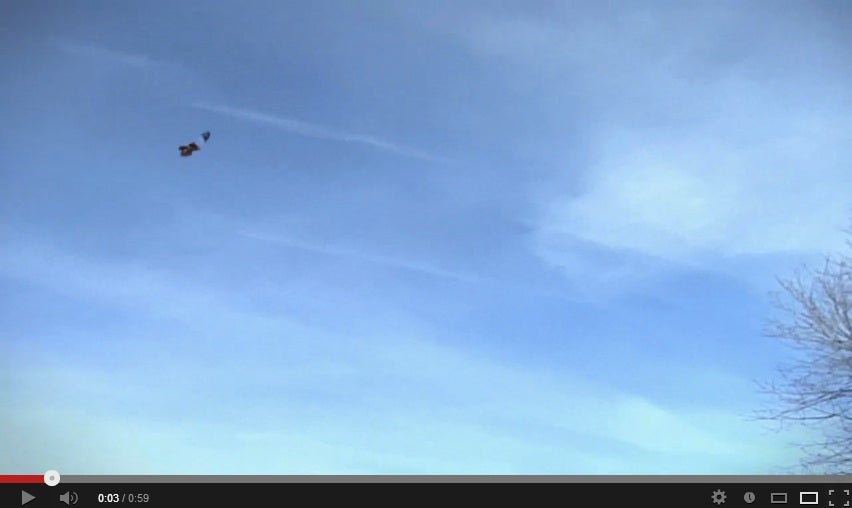 From Motherboard: I knew we were all in for an epic display of virality (sorry) last night when I saw about a dozen unrelated people share the same video last night, a video that features a toddler in Montreal, one turned into a tasty, immobile package of calories by its winter clothing, get snatched up by a golden eagle and dropped on its head. Whether or not you’ve seen it already, watch it again. Don’t worry, I’ll wait.

Thing is, the video was on the front page of Reddit and had just about everyone’s mom sharing it, but I was still impressed to wake up this morning and see it’d grabbed 1.2 million views in 24 hours. That’s impressive, and was for awhile the second-most viewed YouTube video in the last 24 hours. But it’s also hogwash.

First off, the bird’s white plumage doesn’t look like a golden eagle. Adult golden eagles have white tails and smatterings of white in their wings, not a brown tail with white wing tips. That right there is enough for me to call it. But everything else is off too.

Already floating around are a couple videos claiming the original is a fake. Here’s one I thought was the most helpful:

As you can see, the baby seems to float upward after being released by the eagle. That could be explained by the kid’s inertia of being pulled upward by the eagle, or maybe the eagle’s talon was hooked on a string or something that doesn’t show up in the pixelated video, but the physics of the thing seem off. Right now, I’d figure any of the three scenarios are equally likely. (There’s also the classic CGI “found footage” trick of the shooter aiming the camera at the ground while the camera changes scenes; it’s really hard to keep the CGI trick up while a camera is moving quickly.)

There’s also this image, linked in the description of the video above. It comes in early in the original video, and apparently shows the eagle being a two-piece eagle:

Again, that could be some sort of artifact of the video itself, but it’s so large that I don’t think it can be just a resolution error.

Still, all we’re working with here is the usual tools of YouTube conspiracy theories: zoomed in, pixelated images, and image artifacts. But what about the actual biology? Could a golden eagle even snatch up a kid?

Well, golden eagles have wingspans between six and nearly eight feet (the video gets that right), and have a grip strength somewhere between 20 and 35 times that of the average human. They’re immensely, unfathomably powerful birds, which is why they can take down deer:

Basically, I’d argue that if a real golden eagle was trying to snatch that kid, the kid would be hosed, especially considering he or she was wearing an easily-gripped puffy jacket.

Also, the behavior of the attack is off to me. Years ago I apprenticed for a falconer’s license (yep) and I’ve hunted with a number of large birds, including red-tailed hawks and gyrfalcons. (No eagles yet, unfortunately, although I have chilled with a golden eagle, and yes, they really are huge.) The way the eagle homes in on the kid feels a bit off, with a wide turn and long approach that’s more reminiscent of a fighter plane landing than a raptor, which generally circle at height for awhile before attacking, rather than taking a sudden u-turn to snatch a baby. Perhaps the CGI artist watched more Top Gun than Planet Earth.

That’s not conclusive, but what’s also odd is the eagle trying to fly away with the kid. Even with their size, golden eagles weigh no more than a couple dozen pounds, and that kid weighs at least that again. (I have no idea how much kids weight, so I’m erring on the light side.) Raptors that hunt fish snatch them out of the water and fly away, but I’m not sure an eagle could even lift the kid. Remember, the last time a golden eagle famously snatched something, it dropped the goat off a cliff, when it likely would have preferred to fly away with the thing if it could carry it. Also, as seen in the deer video above and with just about every raptor I’ve seen hunting, it’s common for the bird to initially eat prey where it lands, rather than trying to carry it away.

Again, as I’m not supremely familiar with golden eagle behavior, please chime in if you are. But the whole thing seems off to me, from the video side to the bird’s flight, and the plumage situation is a huge red flag. I think it’s a well done fake. In either case, it doesn’t change the fact that the video is nuts. Just don’t start worrying about golden eagles snatching your kids, please.

Update: Yep, just got confirmation that the video was created using CGI by four students at Centre NAD as part of a school project. Apparently both the eagle and the child are CGI, added to the video afterward. Here’s the statement.